Syrians are voicing their desire for a new civil society based on rationality, negotiation and compromise, writes Geoffrey Aronson. 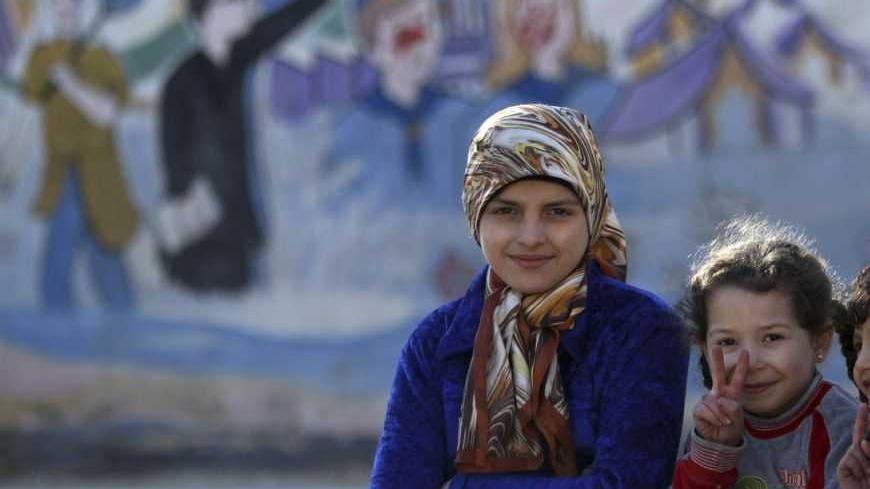 Internally displaced Syrian children gesture as they pose for a photo at a school in Aleppo, Jan. 14, 2013. - REUTERS/Muzaffar Salman

Who speaks for Syria today? The regime of Bashar al-Assad has squandered in two short but bloody years what Syria's modern-day founder spent a lifetime building. Hafez al-Assad was determined to reclaim and protect the independence of Syrian decision making from the voracious claims of outside parties, for whom Syria was merely a way station on the path to grander aspirations, not a destination itself. The costs exacted in pursuit of this policy were high, far too high, but for decades most Syrians were prepared to suffer its grievous shortcomings in order to end the endemic instability that had ensnared Syria during its first postwar decades of independence. That bargain has now been shattered beyond repair, and a new Syria is waiting to be born out of the crucible of today's miserable war.

As the regime atrophied, the ghosts of the old Syria returned with a vengeance. The players are not unfamiliar. Whether national, transnational or sectarian, each seeks to seize a role in the country's future and in so doing undermine Syria's sovereign power to determine its own destiny. Some have Syria's best interests at heart, but many others are content to let Syria and its national identity burn, like Iraq. Where, amid all this, is the Syrian voice in today's battle for the nation's future, and how can it make itself heard above the din of the cannons? In short, what are the views of Syria's “silent majority”?

Finding the answer is the task set by the Syrian Dialogue Project, an initiative by a group of Syrians from inside and outside Syria, including Nidal Alkhoudari, Nabil Beitinjaneh, Sami Bentinjane, Mazen Bilal and Camille Otrakji. They have constructed a “virtual dialogue” among a cross section of Syrians at home and abroad, and who have not taken up arms for one side or another, in an effort to answer the following questions: What do Syrians believe is important to Syrians today, and how can they best shape their future?

“Putting an immediate end to violence and finding political solutions so as to reach a comprehensive peaceful democratic change,” the Dialogue concludes, “is the demand of the majority of Syrian people. What is needed now from all parties is the transition to rationality, to start thinking about settlements and compromises for the sake of the country. All conflicts end by sitting around the dialogue or negotiation table. Everyone has blood on their hands, and everyone has committed serious mistakes. Dialogue, agreement on a transitional period and a national unity government, and consideration of the other side’s fears would ease tension and put Syria’s interest above all.”

While insistent that any solution be Syrian in origin and execution, the importance of an American and Russian role in a political transition — to act as international guarantors for a negotiated settlement and to supervise fair elections at all levels — is recognized and supported.

The emerging big power consensus is channeling many of the views supported by Syria's silent majority. "We all stressed the need for a speedy end to the bloodshed, to the destruction and all forms of violence in Syria,” UN and Arab League envoy Lakhdar Brahimi told reporters after a meeting with top US and Russian officials on January 11. “We stressed again that in our view, there was no military solution to this conflict."

Key elements of this formula are anathema to many fighting for Syria's future today. For them, any compromise is treachery, and no gesture or action of political goodwill possible. For many Syrians, the "Qaddafi solution” is the preferred and, indeed, sole option. While acknowledging this fact, the Dialogue has, however, recorded a majority sentiment for new presidential elections in 2014 or earlier. Let Assad run, they say — and lose.

Regardless, Syrians today are consumed with more immediate and basic problems, first and foremost the elementary requirements of everyday survival. The Dialogue's work paints a compelling picture of the all-encompassing nature of the maelstrom Syrians face today. The daily struggle for food, shelter and security increasingly defines everyday existence for the silent majority, who must navigate the destruction of the old order and the haphazard and turbulent construction of the new. Refugees are not simply hungry; they also represent the destruction of a social and economic system that may never be rebuilt. In this environment, considerations beyond surviving are simply an esoteric indulgence for most Syrians. The games being played by Syria's political class serve only to alienate them from the majority, even as Syrians recognize that without the restoration of an agreed upon political and civic order that reduces the polarization between Salafism and liberalism, the struggle for daily existence will only intensify.

While the elements of the Syrian majority champion the wisdom of the center — the space between political absolutes and sectarian intolerance — they often are left with more questions than solutions for the future. They insist upon the primacy of the rule of law and an end to the Baath's state within a state, but they offer no road map to rebuilding the once pervasive and now imploding security system beyond noting its vital importance for securing the country against foreign and internal challenges. Consensus is lacking on which economic model to follow.

The effort by the Syrian Dialogue Project to construct a hierarchy of interests today as seen by Syrians themselves highlights the value Syrians place on a tolerant and vibrant civil society where policy is not defined by the military balance of forces. It has recorded support for a “flexible state” in contrast to the central, totalitarian state of the Baathists and others contesting for power. The public reflects the unsettled consensus concerning federalism and regionalism and Syria’s legacy of sectarianism that today threatens partition and the very integrity of the state itself.

Soon after his installation as president, Bashar al-Assad dismissed the idea of civil society in Syria. He and Syrians from all corners are now suffering from the price of his cavalier rejection. The Syrian uprising, even as it threatens to consume itself, stands as a historic refutation of his view. Those taking a hand in charting Syria's future could start by paying attention to the authentic voice of the Syrian majority.