The Hamas government in Gaza has vowed to end the presence of Gazans who collaborate with Israel in 2013, while trying to repair its reputation in dealing with the accused, reports Adnan Abu Amer. 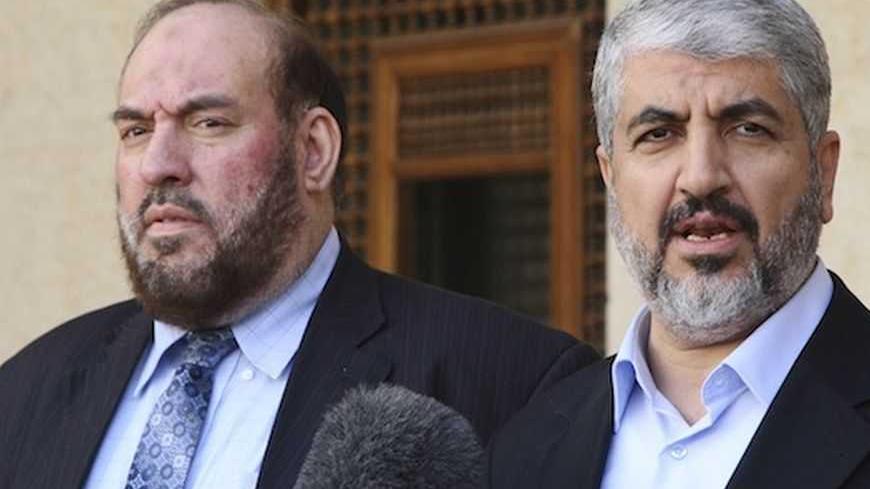 Hamas leader Khaled Meshaal (R) and Mohammad Nazzal, a member of the Hamas leadership, speak to media after their meeting with Jordan's King Abdullah at the Royal Palace in Amman, Jan. 28, 2013. - REUTERS/Majed Jaber

The Palestinian Ministry of Interior in Gaza announced a few days ago that 2013 would witness the end of collaboration between some Palestinians and Israeli intelligence apparatuses. Although the move was welcomed by all citizens, it raised questions regarding the extent of the government’s seriousness and its ability to fulfill this pledge. Many in the Palestinian territories believe that Israel's readiness for a future war would be based on security information gathered by Palestinian agents — dubbed the “target bank” by the Israeli army.

This analysis deals with the collaboration that began after the Israeli army’s occupation of the remaining Palestinian territories in 1967. Israeli security agencies decided to recruit agents and create spy networks in the occupied territories to monitor the Palestinian resistance. The resistance had started recruiting, arming and training, and it had launched guerrilla operations. As a result, Israeli intelligence sought to prosecute and arrest its members by all possible means — the most dangerous being informants. Palestinians refer to informants as "spies, agents, traitors, fifth columns."

The Israeli military knew that military and security technology are no substitute for agents in the field. The success of its field operations essentially relied on its ability to manage these agents. Israeli army's intelligence wings focused on this, allocating huge sums of money to "integrate" and assimilate agents locally so that they could break the psychological barrier between Palestinians and the occupier.

After the outbreak of the Al-Aqsa Intifada, Israeli intelligence had even more need for fast communication with their agents via electronic means. Israeli intelligence also needed to focus on incursions and attacks with the help of the army; they joined its special troops, and executed field assignments such as "cutting the wires of explosive devices" set up by gunmen against Israeli soldiers. A Palestinian agent even admitted that the Israeli army made him wear special shoes fitted with sharp knives for cutting wires of explosives.

It will be hard for the government of Hamas to eliminate collaboration with Israeli forces in part because nobody knows how many pro-Israel intelligence agents operate in the Palestinian territories. No official statistics from Palestine or Israel have been issued, nor have any exact numbers been provided with supporting documentation. Some estimates put the number at less than 10,000, mostly undercover agents with educational and career levels ranging between modest careers and cultured, educated individuals.

Israeli intelligence have sought to attract Palestinians to spy on Israel's behalf. Israel diversified and constantly updated its techniques. It devised plans that would defeat Palestinian armed forces by inflicting psychological, material and personal harm on them and damaging their morale and fighting spirit.

Based on investigations by the Palestinian security services, agent recruitment relies on Israeli intelligence's unconventional abilities. The situation between Israeli and Palestinian intelligence can be described as an open "war of the minds." Methods of coercion adopted by Israeli intelligence include monetary and material rewards, sexual and personal pleasures, economic projects and providing work permits. These rewards are coupled with intimidation and blackmail, including exposing an agent’s ties to Israeli intelligence.

Other incentives on the Palestinian side prompt agents to engage with Israeli intelligence, including a weak sense of national belonging, poor educational level, lack of self-confidence and weak religious morals. Recruitment isn't impromptu or spontaneous, but rather systematic and carefully calculated. A candidate has to pass several stages of tests before being recruited and is investigated on all levels. If a candidate passes, he is recruited permanently after undergoing difficult intelligence training.

The most dangerous stage of recruitment happens when Israeli intelligence attempts to win the trust of "particularly dangerous" agents by establishing comradery. A Shabak officer might see themselves in the agent and identify a common destiny with them. This in turn helps the agent feel happy about his achievements, and the Shabak officer can then win his love and respect.

The history of collaboration shows that spies were recruited everywhere from beauty salons, sewings shop and clothing stores to Israeli prisons, interrogation centers and workplaces within the Green Line. These efforts occured before the withdrawal from the Palestinian territories under the Oslo agreement. However, after the establishment of the Palestinian Authority (PA), holding direct meetings became difficult. As a result, the Israeli intelligence switched to land crossings, commercial ports and areas outside the Palestinian-Israeli border for recruitment.

Communication with the agents takes place with utmost secrecy for fear of exposure. Israeli intelligence has taken advantage of the spread and easy use of mobile devices and the internet, which provide cheap security compared to other means.

The language of communication between an agent and his Israeli recruiter is usually "Arabic and Hebrew." Also, a "code" is used to denote specific words, including special numbers and encrypted names. The agents send urgent, regular and secret information using the Internet, mainly via MSN and email, or dead drops.

Many studies have shown common characteristics shared by most pro-Israel intelligence agents. They can be classified into several types according to the task assigned to them — such as implanted agents, double agents and political agents. The Shabak categorizes agents as bad, important and exposed. Their Israeli employers assign specific tasks to them, especially to those deployed in public institutions such as universities, hospitals, labor unions and political organizations.

Shin Bet used agents to gather information, keep Palestinians from engaging in armed action, kill insurgents and other agents, infiltrate guerrilla organizations, drive a wedge between Palestinians, shake Palestinians’ confidence in their cause and inflitrate Palestinian prisoners in Israeli prisons.

Before the PA formed in 1994, armed groups used to kidnap suspected agents, interrogate them and then liquidate them. Hundreds were executed. This happened in the recent Israeli war on Gaza, too; the Qassam Brigades executed several agents accused of assisting the Israeli Air Force in assassinating Palestinian activists. This sparked controversy and debate over its legality and morality within Hamas itself.

After the PA formed, the picture changed. The issue of Palestinian collaborators was overlooked, despite the formation of security services. The PA feared punishment from Israel and donor states, which considered the punishment of agents a human-rights violation. This fear prevailed despite Palestinian outrage at the agents’ dangerous role in assassinations, incursions and kidnappings carried out by the occupation army.

Before the Hamas government in Gaza announced its campaign "cleansing" the Gaza Strip of agents, the armed factions warned the agents repeatedly and threatened to hunt them down. During the first and second Intifadas, many agents were killed in public squares and centers. They were recorded on video confessing to their relations with the Israeli intelligence and the bloody tasks they had implemented.

However, as has recently been announced, Hamas in Gaza seeks to end the presence of agents without resorting to indiscriminate killings and illegal prosecutions. It aims to do so by using the judiciary and security services, strengthening the rule of law and allowing other governmental and societal institutions — including human rights organizations, the media and religious scholars and intellectuals — to fight this phenomenon.

Adnan Abu Amer is Dean of the Faculty of Arts, and head of the Press and Information Section, as well as a lecturer in the history of the Palestinian issue, national security, political science and Islamic civilization at Al Ummah University Open Education.