Should Lebanon Amend The Taif Accords?

Mohammad Harfoush analyzes the history of the Taif Accords and asks whether they should be amended given the current political climate. 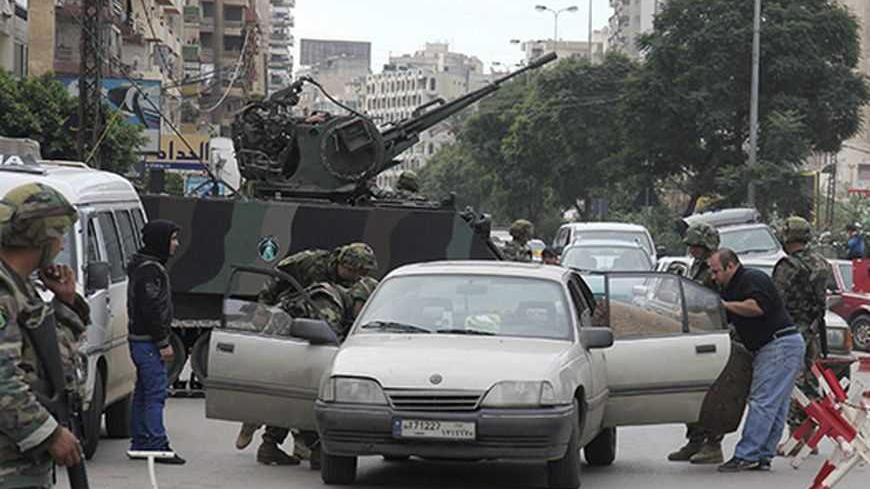 Lebanese army soldiers inspect a car at a checkpoint in the port city of Tripoli, in northern Lebanon, during clashes between Sunni Muslims and Alawites, Dec. 6, 2012. - REUTERS/Stringer

Every so often, some suggest reconsidering the Taif Accords, the constitution that the Lebanese state is supposed to observe. Hezbollah Secretary-General Hassan Nasrallah, for instance, has advocated establishing a constituent assembly. Similarly, Christian leaders — notably the Maronite Patriarch — have proposed enacting a new national pact or amending the Taif Accords.

The Taif Accords, signed on Nov. 10, 1989, were an inevitable necessity. The Lebanese people desperately needed to put an end to the long and bloody civil war, which had taken a huge toll on everyone involved. Moreover, the Lebanese lacked a national reconciliation plan or a group capable of saving the country. Once the war had run its course in Lebanon, there was an international and regional desire to change the region's political course. This was later known as the “New World Order,” which was catalyzed by a series of radical political changes: the break-up of the Soviet Union and the first Gulf war. In the midst of global turmoil, the necessary internal reconciliation coincided with favorable regional and international developments.

The Taif Accords represented a compromise between Lebanese parties to end the war internally, regardless of external factors. The agreement tackled many essential points pertaining to the structure of the political system and to the sovereignty of the Lebanese state. Additionally, the Taif Accords were decisive in determining the Arab identity of Lebanon and in providing more equitable representation for Muslims. The importance of this agreement lies in the fact that it addressed the deepest rifts of the conflict, while blocking foreign interference.

The Taif Accords were preceded by internal political and administrative reforms. They clearly defined the socio-economic system as a free economy and the nation’s political system as democratic, while emphasizing the necessity of balance, justice, social equity and administrative decentralization. In that sense, the Taif Accords were an amalgamation of all the previous national dialogues that had been held for implementing reforms, ending the war and reconstructing the state. It did not force clauses on the Lebanese people that were out of line with their views.

This internal settlement was based on two demands: the Muslim demand of ensuring an equitable confessional formula, and the Christian demand of preserving the state's independence and sovereignty.

Although the Taif Accords' core aim was reaching national accord, many sects neither understood nor accepted their foundation. Shortly before reaching the agreement, the Maronite sect was assigned a dominant role. The constitution gave the Maronite president ultimate executive power, in addition to a parliamentary majority. Maronites were the state’s flag bearers; they were the sect concerned with preserving the identity of Lebanon. Muslims, on the other hand, were accused of prioritizing Arabism over Lebanonism.

The Muslim conviction that they had defeated the Christians served as a clear sign of their misunderstanding of the Taif Accords. All Lebanese parties paid a costly price during the war. But Muslims thought that they could replace Maronite political preeminence with Sunni-Shiite leadership. As a result, the Christians saw the agreement as an unjust plan to replace the Maronites' key role. They refused to hand over Lebanon, their homeland and shelter, and they rejected the confessional power-balancing formula of the Taif Accords.

The Muslim and Christian view of the agreement failed to understand the national reconciliatory aim. Thus, a conflict over preserving or re-acquiring dominance surfaced.

Has the time come to amend the Taif Accords and change the balance of power in Lebanon? Many observers think this question is premature for several reasons:

First, the Taif Accords stemmed from both regional and international developments whose results continue in effect. Although there have been many regional developments in subsequent years, the political equilibrium is still very much the same.

Second, the Taif Accords constituted one facet of a regional-international settlement in the region. It ended the “war of liberation” that was waged by Gen. Michel Aoun against all foreign forces in a bid to curtail the Syrian presence in Lebanon, but it resulted in his ousting. The same settlement is still effective today.

Third, the key powers — the US, Saudi Arabia and Syria — approved back then of the Taif Accords’ formula, but the situation today differs. Given the raging Syrian crisis, the Syrian regime is no longer in a position to impose conditions, while the US and Saudi Arabia have maintained their stability and influence. In other words, the regional-international settlement that imposed the Taif Accords remains highly influential. But the regional ally of those parties that want the accords amended faces a critical situation. Syria is currently in need of a roadmap similar to the national accord of Taif.

The current plight of the Lebanese political system is that some parties think amending the Taif Accords is impossible without continuing with its implementation first. Other parties believe that the decision to amend the accords must be solely made in Lebanon, a prospect unlikely to ever happen.