As tensions between Baghdad and Erbil escalate, Abdel Hamid Zibari argues that Kurdish fears are not exaggerated and that the armament of Iraqi forces poses a serious threat to the Kurdish region. 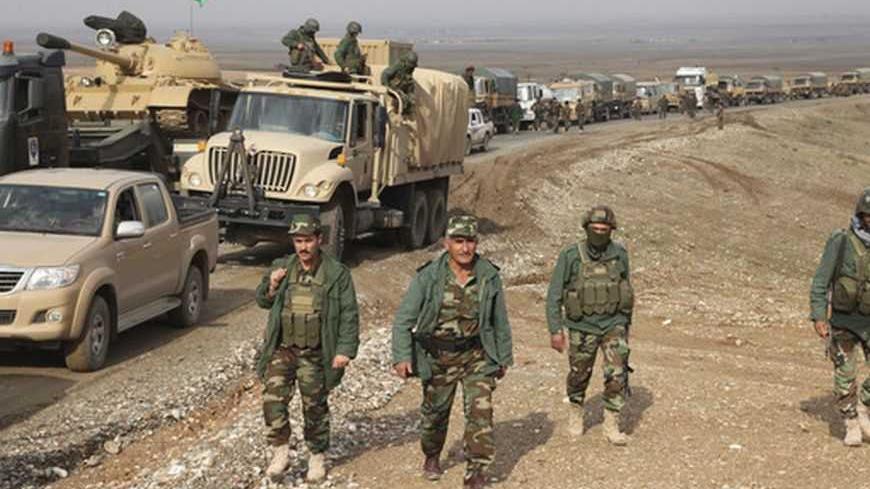 Kurdish Peshmerga troops are deployed on the outskirts of Kirkuk, some 250km (155 miles) north of Baghdad, Nov. 24, 2012. Iraq's Kurdish region has sent reinforcements to a disputed area where its troops are involved in a standoff with the Iraqi army, a senior Kurdish military official said. - REUTERS/Azad Lashkari

Despite repeated assurances from the Iraqi government that arming the Iraqi army will not pose a threat to international or domestic security, Iraqi Kurds insist that this step will plunge the country into a war from which they, more so than the rest of the Iraqis, have the most to lose.

Article 9 of the constitution stipulates, “The Iraqi armed forces and security services will be composed of the components of the Iraqi people with due consideration given to their balance and representation without discrimination or exclusion. They shall be subject to the control of the civilian authority, shall defend Iraq, shall not be used as an instrument to oppress the Iraqi people, shall not interfere in the political affairs, and shall have no role in the transfer of authority.”

Yawar added, “We want an army that protects the people from terrorism and external aggression while also reflecting the demography of Iraq by including Arabs, Kurds and Turkmen. If the army does this, then arming it is completely acceptable.”

After the fall of the former regime, the Coalition Provisional Authority, which had been administered by the United States, adopted the decision to disband the Iraqi army and state security organizations.

Yawar also defended the Iraqi Kurdish demands to arm the Peshmerga forces with heavy weaponry, saying, “According to the Iraqi Constitution, federal regions have the right to maintain a regional guard along with police and security forces. We all came to a consensus in favor of this constitutional article. Any legitimate organization charged with using coercive force in any region of the world needs to have weapons. How else will the Peshmerga and the police protect the area they are tasked with defending if they do not have weapons? These weapons are for protection only and would never be used in acts of aggression.”

Article 117 stipulates that, “This constitution, upon coming into force, shall recognize the region of Kurdistan, along with its existing authorities, as a federal region.”

Shawan Mohammad, a member of the Iraqi parliament from the Kurdistan Alliance Coalition who is also a member of the Security and Defense Committee, feels that they have many observations regarding the policy of arming the Iraqi army, saying, “We are not entirely against equipping the army, but we do have some reservations. Any observer would notice that the armament process being carried out by the Iraqi state is being conducted as if they are planning on going to war soon. We are against the management mindset of the Iraqi defense establishment and we do not have any issue with the Iraqi army as long as it is loyal to the nation.”

The Kurdish lawmaker also indicated that “the Iraqi government has allocated a large budget of more than 19 trillion Iraqi Dinars ($18 billion) to the defense establishment.”

The Iraqi government had previously announced the conclusion of military agreements with the US, Russia and the Czech Republic, in which armaments worth billions of dollars would be provided to the Iraqi army.

He also said that the Iraqi government must balance the personnel of the security institutions so as to incorporate all of the Iraqi people, pointing out that the Iraqi army is not concerned with this issue.

He added, “Kurds comprise 4% of the army, whereas a few years ago they comprised more than 16%; that is not a fair distribution."

”For the first time since the establishment of Iraq in 1921, Kurds hold leadership positions in the Iraqi army, as well as in the Ministry of Defense.

Mohammad stressed that the Iraqi constitution guarantees that the region of Kurdistan have a security force, and also stressed that it is in need of training and armament.

He continued by saying, “The Regional Guard and the security forces need to be trained and armed, leaving the Iraqi government with two options: Either it arms and trains the regional forces, or it allows them to purchase weapons and contract with distributors.”

Observers believe that the Kurds are not alone in fearing the armament of the Iraqi army, citing that other nations are apprehensive about this step, especially Iran, Kuwait, Saudi Arabia and other Gulf countries that were involved in the two Gulf Wars.

Abdulghani Ali Yahya, a Kurdish political analyst and writer, comments that, “In addition to the Kurds, many of Iraq's neighbors have concerns surrounding the armament process of the Iraqi army. Moreover, within Iraq, anxiety surrounding the armament process has taken the form of a demand to remove the army from Sunni governorates. This demand has come from the cities Anbar and Fallujah, and most recently from Mosul, where a young girl was recently raped by her arresting officers.

The former Iraqi regime waged two wars in which millions were killed: The first was Gulf War I with Iran, which lasted for eight years, and the second was Gulf War II, when Iraq occupied Kuwait.

The former regime also waged war on the Iraqi Kurds during the Al-Anfal Campaign. This conflict witnessed the use of chemical weapons in the town of Halabja, which killed more than 5,000 people and left tens of thousands stranded without refuge after the destruction of their villages. Many corpses were found in mass graves in different parts of Iraq after the downfall of the regime in 2003.

In response to those alleging that the Kurds are exaggerating the danger inherent in arming the Iraqi army, Yahya says, “Parallel to Iraq’s attempts to acquire strategic weapons from Washington, Moscow, Kiev, etc., which it has yet to accomplish, we see it intimidating the Kurds by mobilizing its forces in the Zammar regions near Mosul, in the regions of Saadia and Jalawla, and to the southeast in Diyala, in addition to mobilizing Tigris Operations forces in Kirkuk … Kurdish fears are not exaggerated.”

He mentioned that relations between Baghdad and Erbil have become more strained after the formation of the Tigris Operations forces and their deployment across Kirkuk and the disputed territories. This measure only compounds other unresolved crises, such as power-sharing, Peshmerga’s budget, and Article 140 of the constitution.