Israeli Election Boycott by Arabs A Vote Against Their Own MKs

The Israeli Arabs' abstention from voting expressed a much more profound disappointment in their own Knesset members than in the Israeli electoral system, writes Shlomi Eldar. 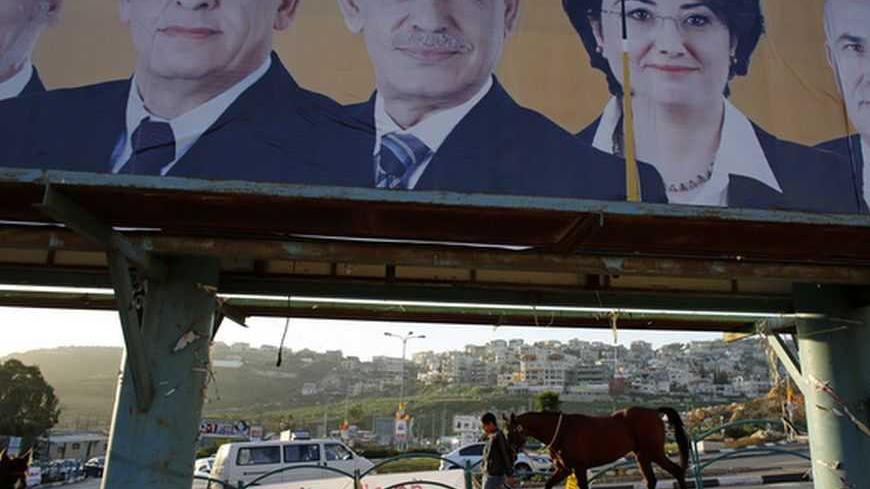 A man walks with a horse near a campaign poster for the National Democratic Assembly party in the Israeli-Arab city of Umm el-Fahm, Jan. 14, 2013. - REUTERS/Ammar Awad

For many years, I have enjoyed visiting the Arab cities and villages in Israel. Each time, I come face to face with the residents’ feelings of discrimination and bitterness, over and over. But I had never before encountered what I felt on election day this week, in the biggest Arab city in the sector. “Apathy” was the first word that came to mind when I got there, but when I looked more closely it seemed that another word was more fitting: despair. It was as clear as the sun that shone so brightly that day; one could almost feel it. And this despair was translated into anger that burst out so intensely that even the candidates of the Arab Knesset lists were astounded.

And they had good reason to be stunned. It became clear to me very quickly that most of the anger was directed against them, even more than against the Jews. The Arab MKs had tried to explain to them logically that mass non-voting would have negative repercussions. But as we know, anger and despair are irrational forces, and thus all the explanations were of no use. Also useless were their threats that a voting boycott by Arab-Israelis would only strengthen the Right, causing the incoming Knesset to be flooded with bills that would make their lives hell. Their allegation — “you are shooting yourselves in the foot” — did not help at all. On election day, logic did not prevail in Umm al-Fahm. As far as its Arab residents are concerned, one more bill against them makes no difference.

Such bills were not lacking in the outgoing Knesset. One example is the bill proposed by MK Danny Danon of the ruling Likud Party. He did not even try to hide the bill’s racist character in vague wording. He called it the “Pledge of Allegiance Law,” and its major points are as follows:

In order to strengthen the citizens’ feeling of belonging to the state and its institutions, it is proposed that as a stipulation for the state to dispense any basic official document to its citizens such as an identity card, passport and driver’s license, the citizen will be required to pledge allegiance to the state and its values. A citizen who negates the values of the state will not be able to benefit from its services […] The wording of the pledge will be, “I pledge allegiance to the State of Israel as a Jewish, democratic and Zionist state, and commit myself to guard its symbols and values and not take action against it or against any of its institutions.

The draft bill did not pass in the Knesset. However, Otzma Leyisrael Party candidates Arieh Eldad and Michael Ben Ari, who enjoyed marching forcefully through Arab cities and especially in Umm al-Fahm, did not hesitate to adopt this bill as their banner and slogan.

Sometimes it seemed that right-wing Knesset members competed against one another in crafting legislation that would place obstacles in the paths of Arab citizens of Israel. Another example of this is the Nakba Law — a draft bill initiated by MK Alex Miller of Yisrael Beiteinu (which united with the Likud in the recent elections). According to Miller’s version, whoever observes Israel’s Independence Day as a day of mourning — would be sent to prison. The bill was supported by the government, but due to heavy public pressure, an alternate version was agreed upon. The new version removed the penal section, and the punishment section focused on denying public funds to institutions that observe Nakba Day. Another colleague in the party, MK David Rotem, initiated a bill according to which military or national service “expresses loyalty to the state, and therefore privileges the citizen with preference in receiving services.” A not very original way to deny rights.

This was the context for the atmosphere of despair on the Arab street on the eve of election day. There was the sense that the right-wing parties would take the 19th Knesset by storm, and that bills similar to those above would be inevitable (in psychology, this is called “acquired helplessness”). Apathy was so strong in the Arab sector that in a rare move, the Arab League published a call to Israel’s Arabs to shed their apathy and vote “in order to curb the strengthening of the Right in Israel and halt the flood of these laws.”

But even this did not help.

The Arab citizens preferred to vote with their feet — a protest against the political system that legislates laws against them. But even more, this was against the Arab Knesset members. Arab citizens have been bitterly disappointed by their representatives in the Knesset, who are supposed to promote their interests and improve their status. They felt that no one really cares about them. The Jewish parties, including leftist and center ones, were afraid to approach them, as they felt that it might harm their standing in the Jewish sector. They felt that the Arab parties dealt too much with the situation of the Palestinians in the territories and in inventing gimmicks that would promote themselves in the Israeli media. They felt that their representatives should have been working to advance the infrastructure of roads and sewage systems in their villages and cities, those same sites that struggle with clipped budgets.

The apathy toward the political system in general, and their representatives in particular, was so striking that even the candidature of Umm al-Fahm’s Afou Eghbariyeh, number four on the Hadash list, did not encourage his neighbors to run to the polling booths in the hopes that their neighbor from the same city would do something to help them in the Knesset. (Nevertheless, it should be noted that Hadash received less strident criticism in comparison to the two other parties, Ra’am-Ta'al and Balad.)

But the most worrisome phenomenon of all is the despair and frustration among the youth. If the older generation still hesitated, the youth decided point-blank that they would have no part of the “democracy game,” in effect voicing painful pessimism regarding their situation and future in this country. As far as they are concerned, democracy is not only about inserting a vote in the ballot box, but real equality in all spheres of life — and that is not what they receive.

“I went to study in Israeli universities,” one of them told me. “I invested tremendous effort in my studies, to prove that I can integrate into Israeli society. But I discovered, only after I finished, that educated Arabs still struggle to find work commensurate with their qualifications.”

In their viewpoint, equality will never happen anyway. So if democracy is flawed in its very essence, what advantage lies in taking part in it and sending more representatives on their behalf, if those representatives will also do nothing for them? Not only that; quite a few people feel that those same MKs who do nothing on their behalf actually pour fuel on the bonfire of animosity that already burns between the two populations.

I was surprised to hear from several of them that MK Haneen Zoabi’s deed of joining the Turkish Marmara boat that sailed to Gaza, which aroused a great uproar and tremendous diplomatic crisis between Israel and the world, only harmed them. They feel that Zoabi only deepens the hatred and distrust toward them on the Israeli street, because Israelis view her as their faithful representative and think that they support her provocative acts.

Most amazing of all is the fact that despite the high intensity of the anger, despair and disappointment described above, these emotions went under the radar of the three Arab parties’ representatives. The politicians did not sense anything amiss, even until the very last day of the campaign. They did not feel it in the small civic meetings they conducted, in the election assemblies or even on the street. Only on election day did they discover the depth of the credibility crisis of their electors.

On the eve of the elections, the three large Arab parties — Hadash, Ra’am-Ta'al and Balad — established a special headquarters, a real “war room,” in Nazareth. This, too, didn’t really help. After the exit polls were publicized, which gave the Arab parties around 10 mandates — about half of their potential strength — MK Ahmad Tibi (Ra’am-Ta’al) said that if all the Arab citizens of Israel had gone to the voting booth, Prime Minister Benjamin Netanyahu could have been replaced. Tibi called this a historic failure, but it seems that the failure is that of the Arab MKs. It seems that the ones who halted the legislative acts and constant threats demonstrated by the outgoing Israeli Knesset against Israeli Arabs were precisely the Jewish voters. These Jewish voters made their opinions clear regarding the incoming Knesset: Enough insanity, enough verbal attacks of Knesset members, enough “Elkins" (a reference to the bills outlined above).

Is this what will return trust and hope to the Arabs of Israel — perhaps even more than the deeds of their representatives in parliament?