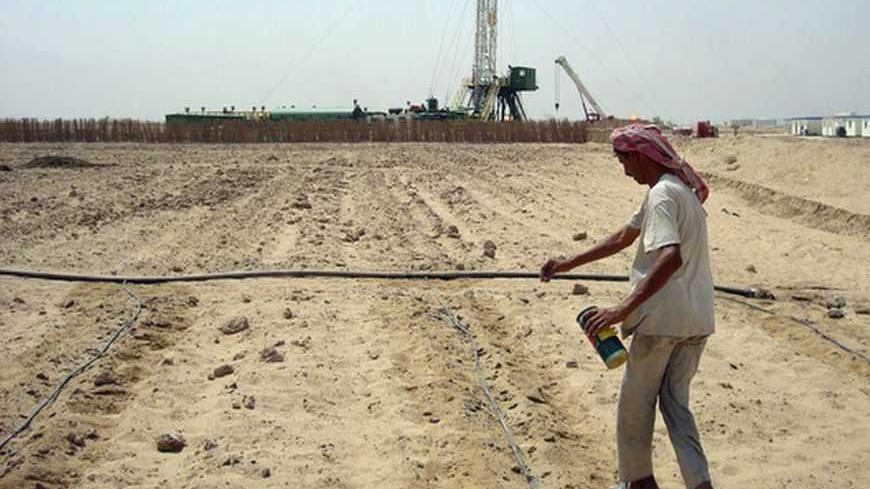 A farmer sows seeds of cucumber at his farm near an oilfield in Iraq's southern province of Basra Aug. 12, 2010. - REUTERS

Beset by a lack of expertise, capability and workforce, agriculture in Iraq — and other sectors of the economy — is dysfunctional.

In the mid-1990s, following the invasion of Kuwait, an economic blockade was imposed on Iraq, preventing the import of vital goods. Vast tracts of Iraqi land were used at the time to meet 50% of the domestic wheat demands.

According to experts, agriculture represented 7% of Gross National Product (GNP) in the 1990s.

In the aftermath of the 2003 Iraq war, agricultural productivity decreased by 90%. The workforce shifting toward state employment, a lack of government subsidization and the lingering effects of long years of severe drought all took their toll on agriculture. From 2004 until 2010, Iraq witnessed its driest winters on record.

Across large swaths of Iraq, wheat crops rely heavily on rain. This agriculture is widely spread in Kurdistan, the provinces of Anbar and Saladin, the city of Mosul and some southern regions, all of which typically experience high amounts of rainfall.

Saddam Hussein’s regime succeeded in persuading the owners of large agricultural holdings to invest in wheat through tripling the prices paid for the crops. When the government of Nouri al-Maliki, on the other hand, followed Saddam’s steps in 2008 by doubling the prices, they aroused little interest on the part of farmers.

For years now, the amount of wheat bought by the Ministry of Trade from local farmers has been steady and not seen any sort of rise, even when prices doubled. As this quantity has increased by 10% since the year 2009, the absence of local contribution has become even more apparent.

Raad Khalil, an Iraqi in his thirties, says that he “temporarily” works in agriculture. “I am looking for a government job, and there are a few officials who have promised to hire me,” he adds. Khalil owns 7,000 square metres of land along the Euphrates River near al-Ramadi, one of Iraq’s biggest towns.

“Agriculture is a hard task to perform and does not provide a steady livelihood; I have a family whose needs I must meet. At times, I make $500 per month, other times only $100 and on occasion I don’t earn anything at all. The Iraqi soldier receives a salary of $1,000 monthly. Why not ensure a fixed and stable income for my family?”

Khalil holds a diploma in Islamic studies. He explained that the majority of young farmers in his region have enlisted in the army or police force, while the rest are waiting in line. “The area of plowed lands is dwindling day after day; the workforce is becoming scarce,” he declares.

Khalil must constantly deal with his father’s vehement reluctance. “My father belongs to this land; he urges me to pursue agriculture work. We have been a family of farmers for centuries,” he says.

Despite the government’s support, the number of farmers has fallen.

The figures of the Ministry of Agriculture indicate a significant decrease in the number of farmers and the area of plowed land, a high-ranking official in the ministry confirmed. Speaking on condition of anonymity, he reiterated that “this work is no longer tempting. Farmers enviously watch government employees buying brand-new vehicles and replacing their furniture. They want the same for themselves.”

When asked if the state were capable of restoring the legacy of agriculture through subsidizes, he replied, “If people do not believe it can be restored, the state cannot do anything to change their views.”

The government provides farmers with fertilizer, agricultural equipment, different types of seeds and pesticides at subsidized prices. Additionally, it offers installment plans if farmers wish to buy tractors or other necessary vehicles.

The agricultural slump did not only impact wheat. Post-2003, the repercussions have been felt by other crops such as potatoes and tomatoes. Iraq, once a major exporter, has become dependent on imports all year round.

Crops imported from Iran, Jordan, Kuwait and Turkey are highly competitive in terms of quality and price.

“Jordan uses techniques that Iraq lacks such as drip irrigation and sprinklers while we opt for surface irrigation. Thus, Jordanian farmers need one quarter of the water that we do,” Khalil says.

In 2011, the government tried to limit the import of crops. As a result, prices skyrocketed and what was thought to be a way to boost local agriculture failed miserably.

Omar al-Shaher is a contributor to I’s Iraq Pulse. His writing has appeared in a wide range of publications including France’s LeMonde, the Iraqi Alesbuyia magazine, Egypt’s Al-Ahaly and the Elaph website.