Plans to restore and repopulate Iraq’s border villages destroyed during its war with Iran have been met with accusations of electioneering from Kurdish politicians, writes Omar al-Shaher. 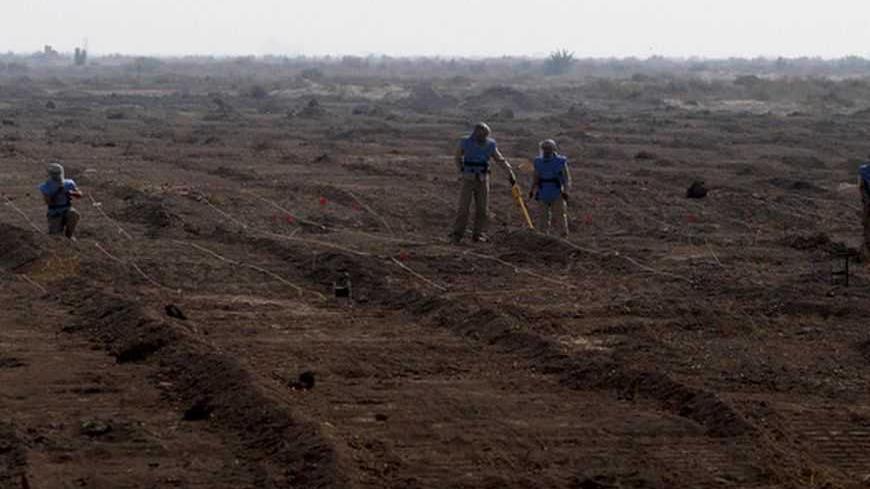 Members of the Iraqi Mine and Unexploded Ordnance Clearance Organization (IMCO) work to find mines in the Shatt-al-Arab district, in Iraq's southern city of Basra, Nov. 6, 2012. - REUTERS/Atef Hassan

For weeks, numerous Iraqi politicians have been speaking about a bundle of development projects in the country, including reviving the thousands of border villages that were abandoned and decimated during the Iran-Iraq war. However, some contend that “these rumors are merely propaganda for the approaching local elections."

Members of parliament say that it is the responsibility of the government to find a solution for the problem affecting hundreds of thousands of Iraqis who fled from their villages in the central, northern and southern border regions. These dislocated people left their homes due to the Iran-Iraq war, or because of the al-Anfal Campaign, which former Iraqi President Saddam Hussein’s regime carried out against the Kurds.

Mansour al-Tamimi, a representative from Prime Minister Nouri al-Maliki’s bloc, said that Iraq's financial budget suffers from big problems. One of these problems is its lack of transparency in disclosing how funds are distributed to city centers and outskirts. Tamimi said, "This imbalance continues to prevent border villages from receiving the allocations they need."

Tamimi, who hails from the Basra province in the Shiite-dominated south, said that in 2012 his city spent about $400 million of its budget on pavement. It spent a tiny amount, however, on projects to revive and restore the border villages destroyed by the war with Iran.

Tamimi also said, "Plans for reconstructing and saving these villages are ink on paper, and nothing more." He described the country's budget as "nothing but a gateway to corruption."

He went on to say, "In Basra, there are about one million mines scattered throughout a number of border villages. There are vast residential, agricultural and coastal areas hindered by these mines. The environment department of the South Oil Company signed dozens of contracts with fictitious mine-removal companies. The people in that department have received millions of dollars as a result of signing [them] ... As of now, the mines remain as they were in these abandoned border villages and thus their residents cannot return."

Tamimi added, "Some residents of the city of Faw on the border with Iran have been displaced since the early 1980s. They now live in difficult circumstances with large families. They are without proper housing while their property stands dilapidated and littered with mines."

During its eight years of carnage, the Iran-Iraq war hit Basra as hard as any area. This war led to the desertification of vast agricultural areas due to the mines and other military remnants, which in turn caused the displacement of hundreds of thousands of people from these areas.

Iraq does not keep statistics regarding the populations from or number of abandoned and destroyed villages.

A representative from the Iraqi opposition in parliament said that "the Shiite lawmakers from the southern cities where the majority of abandoned villages lay have not taken up this issue."

Representative Nora Salem, who hails from the Sunni-dominated northern city of Mosul, visited the city of Basra’s abandoned, dilapidated villages and despite nearly a quarter century having passed since the end of the war, she said that "some of these villages appear as if the war had just ended."

Salem said, "The 2013 budget passed by parliament contains little in the form of relief for these stricken villages. Most of the Iraqi villages on the border with Iran suffered significant damage during the Iran-Iraq war. These villages were a battlefield during that war."

According to Salem, many of the residents from these areas were pursued by Saddam’s regime. The Iraqi government at that time accused them of collaborating with Iran and razed several Iraqi border villages to the ground.

Many of the displaced are now living in cities in the Iraqi province of Diyala, Kuwait and elsewhere.

Salem added that "an injustice is being done to these villages in the 2013 budget. I am currently working on preparing a detailed project that will determine the allocation of funds so as to restore these villages. The 2014 budget may contain a solution to this issue."

Salem requested that the governorates in which these villages are located prepare a comprehensive survey and gather all the necessary information for restoration. She also called for civil-society organizations to participate in these efforts.

She said, "We fear that neglecting these villages, which are currently forming administrative councils, will cause them to fall off the map of Iraq. Neglecting these councils could change the geographical map of the country."

A Kurdish representative in the Iraqi parliament said that "the current rhetoric of some politicians regarding restoring the abandoned villages is electioneering."

The representative, who wished to remain anonymous, said, "Local elections are only about three months away. Thus, we will hear about many such projects in the near future. It is all just talk. Not one sheet of paper has been written regarding restoring the decimated villages. We hear talk in the media, but no one introduces projects proposing clear solutions."