Outgoing Secretary of State Hillary Clinton mastered the memes of 21st century diplomacy but her substantive legacy, especially on the Middle East, is thin. 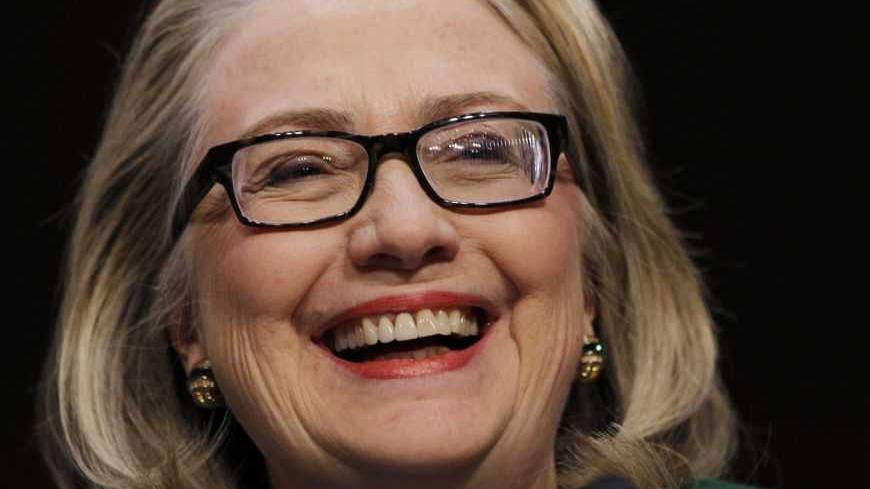 Hillary Clinton sits down to testify on the September attack in Benghazi, Libya, during a hearing held by the Senate Foreign Relations Committee on Capitol Hill, Jan. 23, 2013. - REUTERS/Kevin Lamarque

One more day, one more standing ovation. Hillary Clinton received the accolades of the Council on Foreign Relations Thursday in her last major public appearance before leaving office Friday [Feb. 1] as secretary of state.

Clinton asserted that the US was far “stronger at home and more respected in the world” than when she and President Barack Obama took office four years ago.

She described a changing mix of institutions and techniques she has embraced to exert influence in the 21st century and compared them to a building by architect Frank Gehry. The institutions created after World War II — the World Bank, International Monetary Fund, NATO and the United Nations – were more like the ancient Greek Parthenon, she said.

But if Clinton has mastered the lingo and the memes — the Twitter feeds and town halls that are now required tools for top diplomats — her substantive legacy remains thin, especially when it comes to the Middle East.

Clinton was prescient in predicting the upheavals that have convulsed the Arab world over the last two years. At a forum in Doha, Qatar, in January 2011, she warned assembled dignitaries that “in too many places, in too many ways, the region’s foundations are sinking into the sand.”

But she and the administration she serves have struggled to keep pace with developments in Egypt, Tunisia, Libya, Yemen, Bahrain and most especially, Syria. The death of US Ambassador to Libya Christopher Stevens and three other Americans last September at the hands of Muslim extremists who have yet to be caught and punished occurred on Clinton’s watch; the US failure to adequately protect its mission in Benghazi will remain a blot on her record.

On Arab-Israel peace, Clinton did less than her predecessor, Condoleezza Rice, and has little to show. After an early effort led by the Obama administration’s special envoy, George Mitchell, failed, the peace process has remained in limbo. Clinton’s only major accomplishment was helping to clinch a cease-fire last year between Israel and Hamas in a brief war that neither side wanted to prolong.

And while Clinton bragged on Thursday about the international coalition the Obama administration has assembled against Iran and the “crippling sanctions” that have been imposed against that country, a negotiated cap on Iran’s nuclear program and improvement in US-Iran relations seem as elusive as ever.

Clinton said nothing Thursday about the negotiating stalemate with Iran, promising only that “we will do what is necessary to prevent Iran from developing a nuclear weapon.”

During a brief question and answer session, she was asked why America is even more unpopular in the Middle East than it was during President George W. Bush's administration — at least judging from public opinion polls. Clinton said that was “unfortunate.” But like  many of her predecessors, she seemed to blame anti-Americanism in the region more on a US failure to explain itself properly than on US policies that continue to antagonize and disappoint local populations.

While Clinton conceded that US support for Israel and anger over past support of authoritarian regimes were  factors, she asserted that “We’ve not done a very good job in recent years reaching out in a public media way.”

Clinton praised a year-old Center for Strategic Counterterrorism Communications, which was created by the US to contest the views of al-Qaeda and other extremist groups through videos and other content posted online in Arabic, Somali, Punjabi and Urdu. But Clinton said “we can do a better job” refuting conspiracy theories that remain prevalent about the US in the Arab and Muslim world.

She specifically criticized the Broadcasting Board of Governors responsible for government-financed media such as the Voice of America and suggested that the US should employ lessons learned during the Cold War against the old Soviet Union.

More money spent on information campaigns and cultural exchanges, however, are unlikely to convince Arabs and Iranians that the US cares about their welfare.

Clinton, who has been coy about her plans to run for president again in 2016, concluded her remarks with a ringing endorsement of US leadership in the world which she maintained was more essential than ever.

She conceded, however, that while “we may be indispensable, we’re not perfect.”