Democratic front-runner Hillary Clinton, in a foreign policy speech in San Diego on June 2, honed the case for her candidacy down to the narrow and compelling argument that Donald Trump is unfit to be commander in chief. 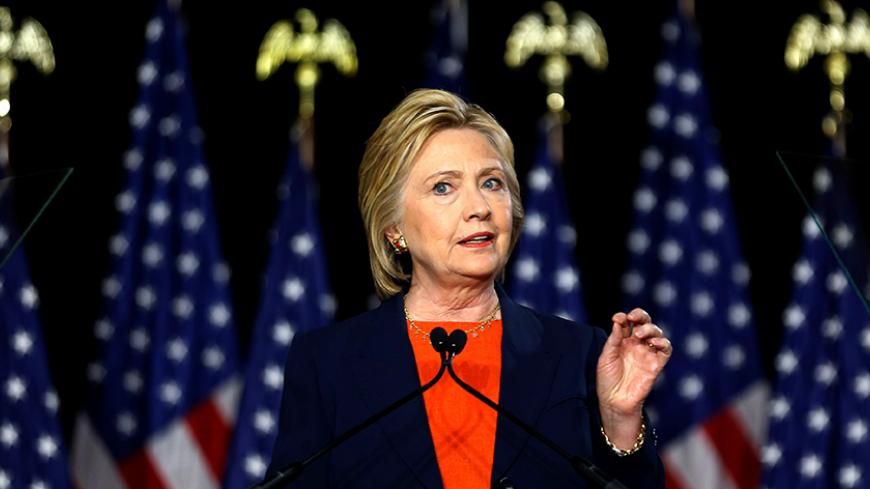 Washington — Democratic presidential front-runner Hillary Clinton found her footing in a major foreign policy speech in San Diego June 2, offering voters a clear choice on the question of who is more qualified to be US commander-in-chief, her or Donald Trump.

“Americans aren’t just electing a president in November. We’re choosing our next commander in chief — the person we count on to decide questions of war and peace, life and death,” Clinton said in a foreign policy speech in San Diego on June 2. “And like many across our country and around the world, I believe the person the Republicans have nominated for president cannot do the job.”

“Donald Trump’s ideas aren’t just different — they are dangerously incoherent,” Clinton charged. “They’re not even really ideas — just a series of bizarre rants, personal feuds and outright lies. He is not just unprepared — he is temperamentally unfit to hold an office that requires knowledge, stability and immense responsibility.”

“This is not someone who should ever have the nuclear codes — because it’s not hard to imagine Donald Trump leading us into a war just because somebody got under his very thin skin,” Clinton said. “We cannot let him roll the dice with America.”

Clinton contrasted her national security experience traveling to more than 100 countries as President Barack Obama’s first-term secretary of state, helping negotiate the new Strategic Arms Reduction Treaty with Russia and pursuing the diplomacy that led to tough international sanctions that helped bring Iran to the table to negotiate the nuclear deal with Trump’s resume pursuing real estate deals, running the Miss Universe contest and hosting “The Apprentice” reality television show. And while using humor to mock Trump’s more frivolous resume and angry tweets, Clinton more seriously charged that the Republican front-runner betrays American values by cozying up to dictators and strongmen such as Russia’s Vladimir Putin, by promoting torture, with his rhetoric against Muslims and Hispanics and by his casual disregard for maintaining historic US alliances in Europe and Asia.

“He has said that he would order our military to carry out torture and the murder of civilians who are related to suspected terrorists — even though those are war crimes,” Clinton said. “He praises dictators like Vladimir Putin and picks fights with our friends — including the British prime minister, the mayor of London, the German chancellor, the president of Mexico and the pope.”

“He says he has foreign policy experience because he ran the Miss Universe pageant in Russia,” Clinton mocked.

“Making Donald Trump our commander in chief would be a historic mistake,” Clinton concluded.

“This is a political speech by a political leader,” Rubin, now president of the Washington Strategy Group, told Al-Monitor on June 3. “That is the point. She is not secretary of state. She is not a senator. She is a candidate competing to be elected. And what she is doing is creating a clear choice for voters.”

“It was a political speech … to make sure voters understand what the stakes are and that this is a candidate who has a clear plan for dealing with those stakes … when contrasted with the alternative,” Rubin said. “In that binary choice, decision box, who do you think has the right grasp of the key issues that we have to confront, and who do you think can deal with them? And that is what she is trying to describe.”

While Republican members of Congress, some of whom have reluctantly endorsed Trump, have tried to frame the 2016 election as being about preventing Democrats from winning and being able to pick liberal justices to serve on the Supreme Court, Clinton effectively reframed the debate on the 2016 stakes to be about the commander in chief test — essentially war and peace, life and death, Rubin said.

“What Hillary did yesterday was reframe that and tell people that the biggest risk, danger spot, is this choice about whether [we are going to] have someone drop a nuclear bomb on our heads,” Rubin said.

“It’s no small thing when [Trump] suggests that America should withdraw our military support for Japan, encourage them to get nuclear weapons, and [he] said this about a war between Japan and North Korea — and I quote — ‘If they do, they do. Good luck, enjoy yourself, folks.’ I wonder if he even realizes he’s talking about nuclear war,” Clinton said.

Clinton also defended the landmark Iran nuclear deal, noting her role in helping support Obama’s efforts to pursue a diplomatic resolution to the Iran nuclear issue, and saying as president she would work to vigorously enforce it.

“We brought Iran to the table. We began talks. And eventually, we reached an agreement that should block every path for Iran to get a nuclear weapon,” Clinton said. “Now we must enforce that deal vigorously. … But there is no question that the world and the United States, we are safer now than we were before this agreement. And we accomplished it without firing a single shot, dropping a single bomb or putting a single American soldier in harm’s way.”

“Donald Trump says we shouldn’t have done the deal. We should have walked away,” Clinton continued. “So then what? War? Telling the world, good luck, you deal with Iran? Of course Trump doesn’t have answers to those questions. Donald Trump doesn’t know the first thing about Iran or its nuclear program. Ask him. It’ll become very clear, very quickly.”

Former Israeli diplomat Alon Pinkas assessed that Clinton’s speech offered a clear and experienced foreign policy worldview that would be well-received by US allies in the Middle East.

“I have to say, Hillary is giving a hell of a good speech on national security — taking down the Donald while making a convincing case,” Eliot Cohen, former State Department counselor during Republican President George W. Bush’s second term, wrote on Twitter.

“In sum, her purpose was to paint Trump as a menace to the country and herself as an experienced, sober leader,” conservative Washington Post “Right Turn” blogger Jennifer Rubin wrote. “She succeeded entirely with the former, and to the surprise of many of her critics, made a strong argument for the latter. That should be of comfort to the millions of Republicans and independents who cannot bring themselves to vote for Trump.”

“Hillary Clinton just gave the speech of her life in attacking Donald Trump on foreign policy,” John Podhoretz, the editor of conservative Commentary magazine and a former Reagan speechwriter, wrote. “Indeed, in its most stunning moment, she went after Trump for attacking Ronald Reagan in 1987 in terms similar to those in which he talks about America’s standing in the world now.”

“Trump says over and over again, ‘The world is laughing at us.’ He’s been saying this for decades, he didn’t just start this year,” Clinton said in San Diego. “He bought full-page ads in newspapers across the country back in 1987, when Ronald Reagan was president, saying that America lacked a backbone and the world was — you guessed it — laughing at us. He was wrong then, and he’s wrong now — and you’ve got to wonder why somebody who fundamentally has so little confidence in America, and has felt that way for at least 30 years, wants to be our president.”

“The truth is, there’s not a country in the world that can rival us,” Clinton continued. “It’s not just that we have the greatest military, or that our economy is larger, more durable, more entrepreneurial than any in the world. It’s also that Americans work harder, dream bigger — and we never, ever stop trying to make our country and world a better place.”

Trump, speaking in San Jose the evening of June 2, called Clinton's speech a "hit job" against him, and defended his temperament. "My temperament is so much tougher, so much better than hers," he said, adding "Hillary Clinton has to go to jail."