Salafists Vow to Fight Until There Is 'Islamic State in Syria'

In a rare interview, an Ahrar al-Shams fighter tells Al-Monitor that the goal of his Salafi group is to establish an Islamic state in Syria and that "We will not let go until we achieve our goal." He explained that most of his comrades “don’t know anything” about the external Syrian opposition, and that he believes Turkey is profiting from the war. 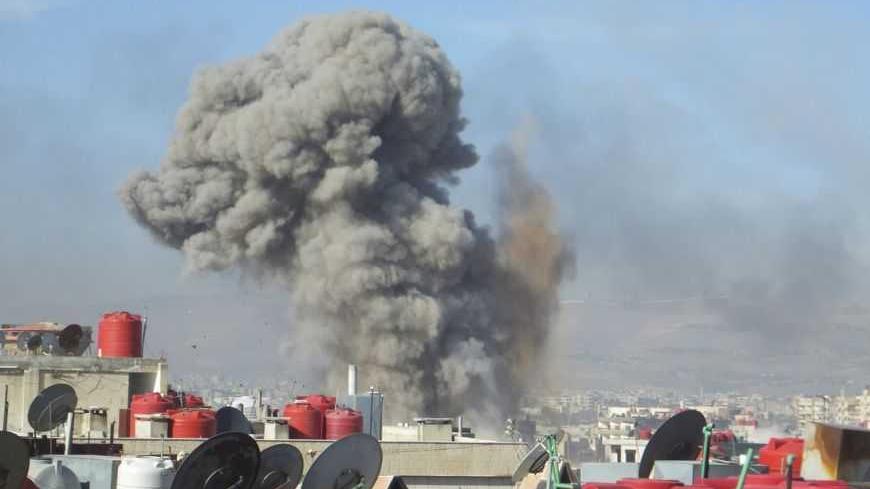 "Rami Youssef" is his revolutionary alias. This young man — aged 18 with dark features and a full, circular beard and shaved mustache in the tradition of the Prophet — has been in Turkey for less than a week. His elder brother said of Rami, "He wants to go back to Aleppo tomorrow and continue fighting." Speaking to Al-Monitor on Jan. 15 via Skype from his brother's house in Gaziantep, Rami acknowledged that he is from the al-Suddik brigade of the Ahrar ash-Sham Battalions.

It is rare for Salafist fighters to speak with reporters. In his conversation with Al-Monitor, Rami Youssef shed light on the origins and objectives of Ahrar ash-Sham (Free People of Syria), which was established in late 2011 as a Salafist group, as well as the still-fragmented nature of the Syrian opposition.

"We are an Islamic group, and we want to establish an Islamic country when the [Syrian President Bashar al-]Assad era ends," said Rami. Rami claimed to have no knowledge of Mouaz Alkhatib, the former imam of a Damascus mosque and the new, internationally recognized leader of the Syrian opposition.

"Most of the fighters just fight because Assad is evil, but they don't know anything about this guy or the opposition outside. They just believe Assad needs to go." He then stressed, "We will fight until we establish an Islamic state in Syria. Even the 75% of the Free Syrian Army is fighting with this in mind. We don't want it as strict as Saudi Arabia, but we will not let go until we achieve our goal."

Rami told Al-Monitor that three months after Ahrar ash-Sham was established, nine trainers arrived from abroad to assist them.

"The leader was of Syrian origin but came from Chechnya. His pseudonym is Abu Maryam," said Rami, when asked what foreign support his group has received. "The others came from Libya, Tunisia and other places. Among other things, they taught us how to promote our organization. People started to join us, and we grew quickly."

The founder of Ahrar ash-Sham goes by the name Abu Abdallah, but he remains mysterious. No one knows much about him. Even Rami preferred not to talk about him or his whereabouts except to reveal, “He is also from Aleppo.” Rami claimed that there are some 5,000 to 6,000 Ahrar ash-Sham fighters in Aleppo and the surrounding countryside and admitted that they receive foreign funding.

“We get money from the Gulf – mainly from Saudi Arabia and Qatar as well as Kuwait and Bahrain,” he said. “We fight in our name as Ahrar ash-Sham, so our budget is not the same as the Free Syrian Army's. And we only use this money to buy weaponry for ourselves and the battalion.”

“We usually have machine guns and RPGs,” Rami told Al-Monitor. “We just recently started to get anti-aircraft weaponry. We looted some from the regular army. We buy the rest from Turkey or Chechnya or other places.”

Rami is careful when talking about Turkey. “The Turkish government is helping us because they’re an Islamic government too,” he told Al-Monitor. “But they are also profiting from this war by selling weaponry to us at far higher prices. They are becoming opportunistic.”

Rami did not want to go into detail about his group's Turkish sources for weapons. He did, however, offer, “It’s important that the government allows the weapons to go through the borders.”

With great pride he said that although Ahrar ash-Sham fights alongside the Free Syrian Army (FSA), his group is not connected to the latter. He is also not shy about admitting that atrocities have been carried out by both sides. “There are many shabiha [supporters of the Syrian regime] who are raping, stealing and robbing in the name of the Free Syrian Army and the Islamic groups. They just want to give us a bad image,” Rami said. “There are many others who also joined the FSA and Islamic groups to get weapons, and do all the bad things, like stealing and robbing.”

“Many people who joined Ahrar ash-Sham were not good people. They were unemployed people, bad guys, who drink and waste their time,” Rami told. “Most of the real fighters, the jihadists, were either martyred or injured and came to Turkey and other places for hospitalization. So the people who remain now are actually those who are just there for looting, stealing.”

Rami argues that the fighting in Syria has been sectarian from day one. “What do you think the fighters coming from Russia or Iran are doing? They just want to kill as many Sunnis as they can so that they can assure that Assad continues to stay in power,” he said. “After the Islamic groups started to operate across the country, we also started to do the same. It’s our jihadist duty. Now the Alawites are escaping to the coast, moving toward the Latakia region.”

The composition of Ahrar ash-Sham is different from the Free Syrian Army, whose members are mostly retired from or defectors from the regular Syrian army. “About half of us are Syrian. We have members of the Muslim Brotherhood in our group,” said Rami. “But the rest are coming from Libya, Chechnya, Saudi Arabia, Iraq, Egypt, Sudan, Turkey and Azerbaijan. There are even people coming from Belgium.” He claimed that he has seen “plenty” of al-Qaeda members in Syria, but that “their numbers are not as big as the FSA.”

Describing himself as having the body of an 18-year-old but the experience of a 50-year-old, Rami brags that he has become “one of the best snipers” in his group. “I have killed many Syrian military men.” His mother, seated beside him, spoke proudly of her son. “I’m always worried about his life,” she told Al-Monitor. “But he is doing a noble act. If all mothers want their son to avoid fighting, then who is going to fight against this regime? Assad is an evil man. And I believe my son is doing a favor for all of us by fighting against the army.”

All said, however, Rami does not believe the Syrian president will go anytime soon. “The regime is collapsing and getting weaker and weaker each day,” he said, “but it could take yet another year for Assad to lose power.”

Tulin Daloglu is a columnist for Al-Monitor's Turkey Pulse. She has written extensively for various Turkish and American publications, including The New York Times, International Herald Tribune, The Middle East Times, Foreign Policy, The Daily Star (Lebanon) and the SAIS Turkey Analyst Report. She also had a regular column at The Washington Times for almost four years. Daloglu tweets from @TurkeyPulse.