Has US Forgotten Lessons Of its First War With Iran?

America has already fought one war with Iran, writes Bruce Riedel, and we should remember the lessons we learned from it. We can expect to be blamed for anything that goes wrong. Iran will not be easily intimidated by America, and ending a conflict is harder than starting one. Finally, we should be careful to weigh even close allies' advice. 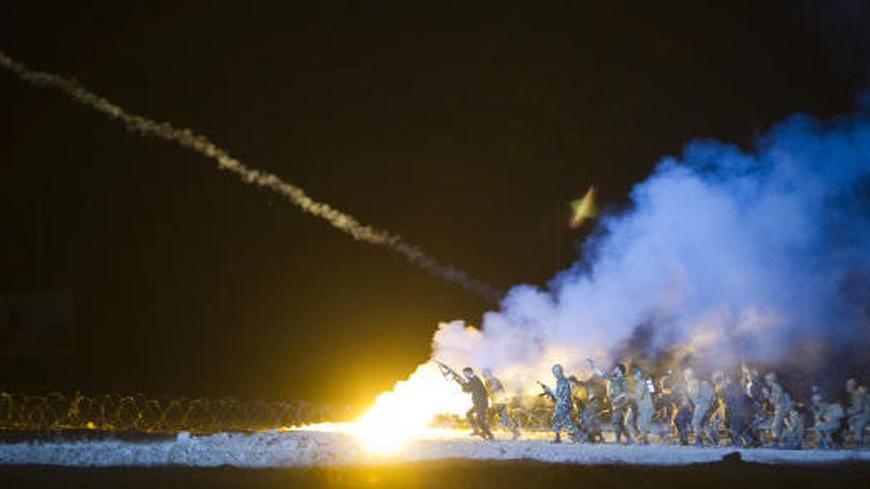 Members of Iran's Basij militia and Revolutionary Guard perform in a play "The memory of friends" to mark the anniversary of the Iran-Iraq war (1980-88), also known in Iran as the "Holy Defence", at a Revolutionary Guards military base in south-eastern Tehran September 26, 2010. - REUTERS/Morteza Nikoubazl

As the United States and Iran enter what may be their last best chance at negotiations before a war against Tehran’s nuclear program, it is useful to remember that America has already fought one war with the Islamic Republic.

In the late 1980s, President Ronald Reagan intervened in the Iran-Iraq war on the side of Saddam Hussein to tilt the conflict to an Iraqi victory. America engaged in a bloody if undeclared naval and air war against Iran, while Iraq fought a brutal land war. The lessons of our first war with Iran should be carefully considered before we embark on a second.

The Iran-Iraq War was devastating — one of the largest and longest conventional interstate wars since the Korean conflict ended in 1953. A half-million lives were lost, perhaps another million injured and the economic cost was over $1 trillion. Yet the battle lines at the end were almost exactly where they were at the beginning. It was also the only war in modern times in which chemical weapons were used on a massive scale.

The 1980-1988 conflict led to other disasters, including the Iraqi invasion of Kuwait in 1990 and the US invasion of Iraq in 2003. The bloody civil conflict in Iraq that followed may not have been the finale in this march of folly. The seeds of multigenerational tragedy were planted in the Iran-Iraq war and we will live with its consequences for decades, perhaps longer.

The first lesson we should learn from the past is to expect to be blamed for anything that goes wrong. Both Iraqis and Iranians came to believe the US was manipulating them during their war. Ironically (and perhaps naively) the US tried to reach out to both belligerents — in great secrecy — offering each a strategic partnership.

The disastrous arms-for-hostages policy of the mid-1980s, in which the US sold weapons to Iran and used the money to pay anti-Communist guerrillas in Nicaragua, convinced Iraqis that the US was playing both sides. The result was that when the war ended, the Iraqi regime and most Iraqis regarded the US as a threat, despite critical support during that war that included intelligence sharing, considerable diplomatic cover and ignoring the largesse of Arab allies who loaned Baghdad tens of billions of dollars to sustain Iraq’s war effort.

Iranians, meanwhile, call the war the “imposed war” because they believe the US instigated it and orchestrated a global tilt toward Iraq in retaliation for Iran’s seizure of US diplomats as hostages in 1979. Iranians note that the UN did not condemn Iraq for starting the war — in fact, did not even discuss the war for weeks after it started — and ultimately blamed Iraq as the aggressor only years later as part of a deal to free US hostages held by pro-Iranian terrorists in Lebanon.

Though the war had tragic consequences for Iran, it enabled the regime to consolidate the 1979 Islamic revolution by portraying the conflict as a David-and-Goliath struggle. The revolution was fairly short in duration and its cost miniscule in comparison. For the generation of Iranians who are now leading the country —— men like President Mahmoud Ahmadinejad and Supreme Leader Ali Khamenei — the Iran-Iraq war was a defining event that shaped their worldview. Their anti-Americanism and deep suspicion of the West can be traced directly to their understanding of that conflict. So expect any new war to make Iran even more extreme and more determined to get nuclear weapons.

Another lesson of the first war is that Iran will not be easily intimidated by America. Iran by 1987 was devastated; many of its cities such as the refinery center of Abadan had been destroyed, its oil exports were minimal and its economy shattered. But Iran did not hesitate to fight the US Navy in the Gulf and to use asymmetric means to retaliate in Lebanon and elsewhere. Even when our navy had sunk most of theirs, Iranians kept fighting and rallied behind then-leader Ayatollah Ruhollah Khomeini.

Iran also fought a smart war, avoiding a too rapid and dangerous escalation. As Chairman of the Joint Chiefs General Martin Dempsey has noted, Iranian behavior is rational, not suicidal. Iran will not take steps that endanger the regime’s survival; it will look instead to exploit US vulnerabilities in Afghanistan and Bahrain, Israel’s in Lebanon and the Saudis’ in Yemen.

Another lesson from the Iran-Iraq war is that ending a conflict is much harder than starting one. In 1988, Iran agreed to a cease fire only after catastrophic defeat on the ground by Iraq and when Saddam was threatening to fire chemical warheads into Iranian cities. Iranians believe they faced a second “Hiroshima” if they did not accept a truce and many evacuated Tehran in fear of chemical attack. Khomeini compared ending the war to drinking poison. While no two wars are identical, we should not expect Iran to back down easily if history is a guide. Certainly, a few air strikes will not suffice.

Finally, we should be careful to weigh even close allies' advice. In the 1980s, Israel pressed Washington hard and repeatedly to offer assistance to Iran. Israeli leaders, generals and spies were obsessed by the Iraqi threat then, just as they are now by Iran. They also longed to restore the cozy relationship they had with the Shah in the 1960s and 1970s.

Israel was the only consistent source of spare parts for the Iranian air force’s US-built built jets throughout the war. Israeli leaders, notably Yitzhak Rabin and Shimon Peres, brought considerable pressure to bear on Washington and the Iran-Contra affair was in many ways their idea. American diplomats and spies abroad were told to turn a blind eye to Israeli arms deals with Tehran even when it was official US policy to (in the Washington euphemism of the day) “staunch” all avenues by which the Iranians might obtain weapons or other material needed for their war effort.

Many Americans do not remember our undeclared war of the 1980s or its lessons. We have fought so many other wars since — in Iraq twice, and in Afghanistan and Libya — that it is easy to forget. No Iranian has forgotten.

Bruce Riedel is a contributor to the forthcoming book “Becoming Enemies: U.S.-Iran Relations and the Iran-Iraq War, 1979-1988,” an oral history. He is a senior fellow at the Saban Center in the Brookings Institution. Riedel was a CIA officer serving in the Middle East during the 1980s.