Peter Beinart, the author of "The Crisis of Zionism," spoke with Al-Monitor's Barbara Slavin, warning that Israel is “sleepwalking to a one-state solution." He suggests slowing settlement expansion through a boycott of products from Jewish settlements in the West Bank and the funding of Jewish education for American Jews. 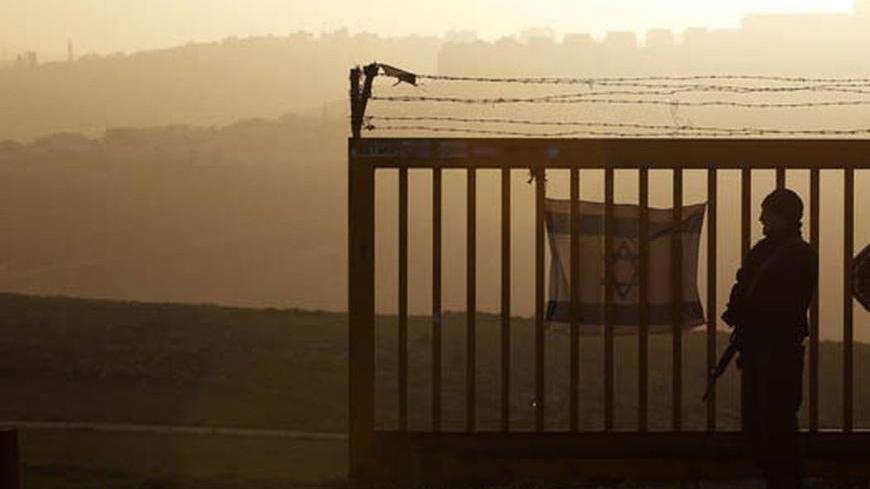 An Israeli soldier stands guard near a gate at the main entrance to the unauthorized Jewish outpost of Migron near the West Bank city of Ramallah February 8, 2012. - REUTERS/Baz Ratner

In a provocative new book published this week, “The Crisis of Zionism,” Peter Beinart bemoans the trajectory of the State of Israel and of American Jews. His suggestions for saving both include a boycott of products from Jewish settlements in the West Bank, a plan that has aroused a torrent of criticism. In an interview March 28 with Al-Monitor Washington correspondent Barbara Slavin, Beinart argues that Israel is “sleepwalking to a one-state solution” and that other efforts to slow or stop settlement expansion are “miserably failing.” Beinart also argues for financial support by the US government for Jewish education in the US, and looks for progressive change among Orthodox Jews, particularly women demanding more equal rights. Beinart is also editor in chief of the new blog Open Zion on The Daily Beast. Excerpts from the conversation follow:

Al-Monitor:  The reaction to your book has been fascinating. Haaretz called you "the Jewish establishment’s enfant terrible." Bret Stephens was a little nastier. If neoconservatives are liberals mugged by reality, are you a former neocon mugged by the current reality of Israel?

Beinart:  I was very influenced by Bosnia and the Gulf War when I was in college and in my 20s. That led me, unfortunately, to be sympathetic to the Iraq war early on ... I was never a neoconservative because I never shared the neoconservative hostility to international institutions. I was a liberal hawk who was marrying American power and international legitimacy ...

I do think my writing on Israel is a product of grappling in the last couple of years with some of the realities in Israel that are now harder to ignore particularly with the rise of this Israeli government, the rise of Avigdor Lieberman [foreign minister and head of the Yisrael Beitenu party that has advocated expelling some Israeli Arabs to maintain Israel’s Jewish majority] and the increase in the settlement population and the increasingly anti-democratic turn that you see in Israeli politics … The question was whether I was going to avoid writing about this subject and cut myself off from something that was perhaps the subject that was closest to my heart, or write about it even recognizing that it would be controversial.

Al-Monitor:  Obviously the suggestion about the settlement boycott has aroused the most controversy. I find it hard to figure out exactly how it would work.

Beinart:  If there is no way of distinguishing between [products produced] inside the Green Line and outside the Green Line, I would not support a boycott. … There have been some successes already for this effort … It’s important that the Palestinian Authority is leading this, not boycotting all of Israel, which I think is a very important gesture in support of a two-state solution … I wanted to spark a conversation about how we were going to keep from sleepwalking to a one-state solution.

Beinart:  I disagree. The status quo is Israel subsidizing lots and lots of people moving to the West Bank; the Jewish population of the West Bank is growing, according to Haaretz, three times faster than the rate of growth inside Israel. If people have alternative suggestions about how we are going to slow and stop settlement growth so we maintain the possibility of a two-state solution, I’m all ears. .. What we are doing now is miserably failing.

Al-Monitor:  Do you distinguish between settlements likely to be retained in any peace agreement and those farther away from the Green Line, like Ariel?

Beinart:  This is part of the problem, that a lot of the settlements that people in the Jewish community say "everybody knows these are going to be part of Israel" — the only people who don’t know that are the Palestinians. This is part of the insular conversation that takes place among American Jews. … There are a lot more settlements that create problems for a two-state solution than the American Jewish community is willing to acknowledge.

Al Monitor:  Israel has done a lot of things that trouble me since the 1982 invasion of Lebanon. But Israel is a sovereign nation. Congress votes aid for Israel cheerfully every year. Is it our responsibility to tell Israelis how to behave? Or to try to save them from themselves?

Beinart:  Israeli interests and American interests are intertwined to some degree. We benefit strategically from having a democratic Israel because there’s a lot of security cooperation and military cooperation that we do with them. It’s not in American interests to have Israel permanently occupy the West Bank, which causes more hostility to the United States in the Arab and Muslim world. For those of us who are members of something called the Jewish people, we have a stake in what happens in Israel because the future of the Jewish people — and even the future of Judaism to a significant degree — will be very influenced by this struggle to ethically wield Jewish power …

Al-Monitor:  In your book, you suggest that Orthodox Jews will continue to multiply and secular and cultural Jews will continue to disappear. You do note the creation of some independent Jewish congregations in the US, but they and groups like J-Street [a progressive group that bills itself as "pro-Israel and pro-peace"] are such a tiny minority in terms of those who self-identify as activist Jews in this country.

Beinart:  My hope is that there will be a renewed commitment to Jewish education outside the Orthodox community as people begin to realize the devastating consequences of raising children without a Jewish education but also that there may be some kind of fracturing within the Orthodox community. The key potential has to do with gender. There are a lot of smart, potentially progressively minded younger Orthodox Jews and younger Orthodox Jewish women who are pushing to reconsider some long-held Orthodox practices when it comes to restrictions on women … That creates potential for a more progressive modern American orthodoxy which could view the Israel question differently. I was surprised by how many Orthodox Jewish kids there were at [the] J-street conference [held in Washington March 24-27]. More than I would have expected and more than in previous years.

Al-Monitor:  One of your suggestions is for the US government to subsidize Jewish schools in this country.

Quotes from "The Crisis of Zionism"