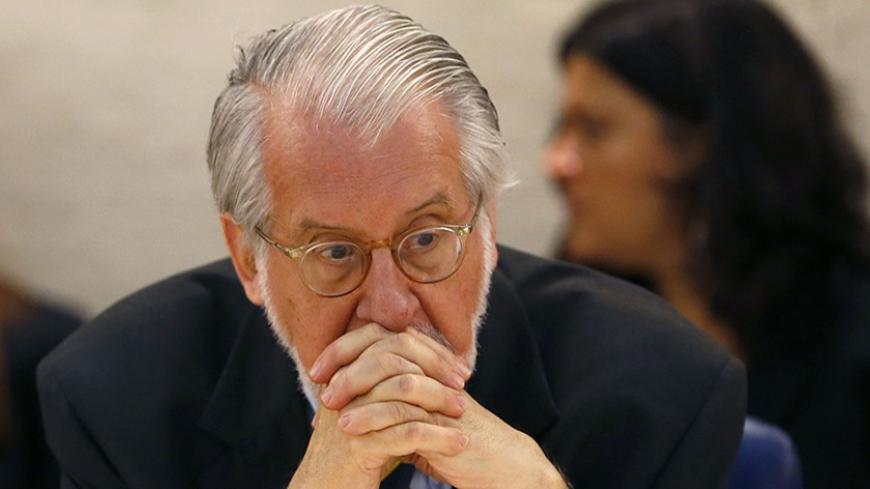 The UN-backed independent Commission of Inquiry on Syria released a report on Thursday documenting human rights violations1 since the beginning of the Syria uprising in March 2011. The report puts most of the blame on the Syrian armed and security forces, which its says committed crimes against humanity. But the commission also accuses armed opposition groups of serious human rights violations. It also drew up a list of perpetrators that includes officials at the highest level of government. The list is being kept secret but could be used in any future prosecutions of those responsible for crimes. The commission was not granted access to the country by Syrian authorities and has relied on interviews with 369 witnesses and victims. Commission Chairman Paulo Pinheiro spoke to Al Monitor:

What has changed significantly since you last produced a report on rights violations in Syria, in November?

The first thing that has changed dramatically on the ground is the presence of armed confrontations. When this conflict began in March 2011, the three first months were characterized by peaceful demonstrations. Now you see an escalation in violence, the presence of armed groups, defections from the army --however limited -- and the presence of the Free Syrian Army (FSA). The second thing is the continuation of the same patterns of gross human rights violations but only more intense, with more victims, especially civilians.

Why does the report refrains from qualifying the situation on the ground as a civil war or an armed conflict?

Because we don’t have the possibility of assessing the size and significance of armed groups and the FSA. We don’t have information about all the operations carried out by these groups. We follow the cautious line of the ICRC [International Committee of the Red Cross] that has also not characterized the internal situation as an armed conflict… However, if the international community is not able to come up with a diplomatic solution, this could well degenerate into an armed conflict. We don’t see any other solution than a negotiated settlement. This is hard for the opposition, for the victims, for the civilian population but reality sometimes is hard to face and you need to face it if you want to find a way out of this conflict.

Do you support the creation of humanitarian corridors to protect and assist the civilian population?

I’m a fan of humanitarian corridors; the problem is that you cannot impose humanitarian corridors protected by foreign armies on a sovereign government. Negotiations are necessary, which is what the ICRC is doing in Damascus as we speak. Also the UN Secretary General appointed a special envoy [former secretary general Kofi Annan] and it is a very important decision. And tomorrow is a great day, we have this meeting of “The Friends of Syria” and as far as I have heard from some of the participants, they are serious about finding common ground to establish a ceasefire in Homs, which is an urgent matter.

How do you explain the high number of children killed in this conflict – as many as 540 – and the arrest and torture of hundreds more? Is it fair to say children are deliberately targeted?

In the case of children killed by snipers, they are obviously deliberately targeted. What is also dramatic is that when Homs is being shelled, perhaps some people think that the army has targets but no, it is indiscriminate. You don’t know where the mortars and rockets are going to land, it is completely random and many civilians are killed as a result. The high number of children killed and injured is a good indicator of the degree of violence the civilian population is subjected to in Syria. In more general terms, the violence used against civilians is utterly disproportionate, especially when compared to the kind of weapons the armed opposition has at its disposal. The situation in Syria is completely different from what we saw in Libya. In Syria, the armed opposition doesn’t have tanks, it doesn’t have heavy weapons. The kind of weapons used by the government in civilian areas, including mortars, shells, rockets and nail bombs is also completely unacceptable and constitutes crimes against humanity.

The report says the commission received frequent accounts of security officials threatening men with the rape of female relatives – have you documented actual cases of rape?

We are being very cautious because in fact we have just a few cases of rape, less than 10 and even then it was difficult to document. We have more cases of women being threatened of rape. It may be cultural. Most women are very cautious about revealing what they have suffered. But that’s not all. At any rate, that would be absurd to say that rape is being used as a weapon of war.

You have established a secret list of particular individuals, including commanding officers and officials at the highest levels of government, responsible for crimes against humanity and other gross human rights violations. Is President Assad among them?

We want to maintain this list secret because we are not a criminal investigative body. We are not a tribunal or a court, we don’t have the power to indict people and naming these people would be a virtual indictment. We did our job. Our mandate is to, when possible, indicate perpetrators of human rights violations and we did that.

This list is now in the hands of United Nations High Commissioner for Human Rights – what is she likely to do with it?

She is the only one to have it. We have destroyed our own copies. It won’t be up to her, she is just a keeper. If the Syrian government, the Syrian society or the international community decides to deal with the matter of accountability, then she may share the names with a competent body. Until then, she will not share it with anybody.

This list also contains the names of FSA groups, for which the commission documented human rights abuses. Did they too carry out crimes against humanity?

We have identified examples of torture, kidnappings, killing of policemen but in terms of the intensity of violations, they can be qualified as gross human rights violations, not crimes against humanity. This doesn’t mean that crimes against humanity have not been perpetrated by armed groups and the FSA, but we don’t have such evidence so far. What we say is that they too must abide to international human rights law.

Are more and more civilians taking up arms?

We have documented the existence of armed groups that are not integrated into the FSA. This is one of the big problems in Syria, one of the reasons behind the escalation in violence; these groups are loose and have no established connections with the FSA. Arms are readily available in Syria and because of the violence, you have civilians taking up arms for self-defense and also to participate in armed operations.

Did you find any evidence supporting the government’s claim that “terrorist armed gangs” are responsible for the violence – at least in part?

The government was not able to provide us with such evidence. Of course Al Qaeda publicly supported the opposition but beyond that the government did not share with us who are the alleged terrorist groups, what organizations are behind them. This does not mean there were not any terrorist attacks in Syria of course, in both Damascus and Aleppo.

The government and the opposition have been trading accusations that foreign elements were operating on the ground? Have you gathered any evidence of foreign fighters, including Iranians, operating in Syria?

We are aware of such reports but we haven’t been able to document that. But let me say that Syria does not need any Iranian fighters to help its security and armed forces, which consist of more that 300 000 people. There is an amazing discipline within the Syrian army and security forces, in fact, so much so that almost one year into the conflict you have very few defections, particularly at the highest level of command. It is completely different from what has been happening in Libya.

Did you document any evidence of weapons being smuggled into Syria by the opposition?

Are you concerned that the shelling of the media center in Homs on Wednesday and the killing of several foreign and local journalists or citizen journalists will prevent the world and the commission from gathering information in the future?

It is tragic and terrible news but I believe journalists won’t be deterred from going to Syria and there are very brave people in and outside Syria that will continue to report on the situation for sure.

What is the next step for the commission, for this report?