The Turkish-Israeli relationship is close to hitting rock bottom, writes Tulin Daloglu. The two countries once had good relations, relative to Israel and its other regional neighbors, but just last week the Turkish Prime Minister's declaration that Israeli tourists were no longer welcome once again exemplified bad blood between the nations. 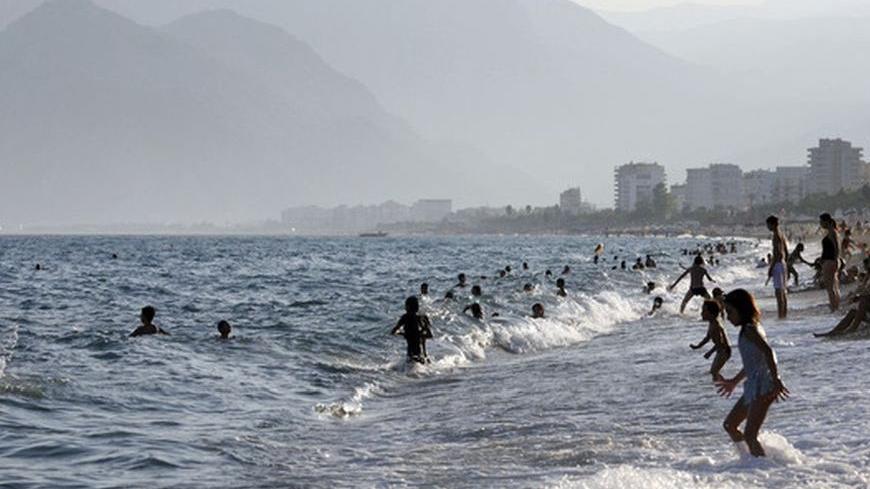 People play on the shore of a beach in the Mediterranean coastal city of Antalya in Turkey. - REUTERS/Fatih Saribas

As political Islam becomes gradually more dominant in the Arab Muslim world, Turkey’s religiously conservative government seems to be losing interest in building bridges with Israel. In other words, the Turkey-Israeli relationship is close to hitting rock bottom.

Last week, Turkey’s Prime Minister Recep Tayyip Erdogan made a baffling statement. “We do not need Israeli tourists. We have successfully filled their places, and in the past year, 31 million tourists visited Turkey.”

Indeed, Turkey’s tourism industry expects to make more than last year despite Europe’s deepening financial crisis. The vacation destination expects to earn $25 billion this year and ranks seventh in the world in terms of the highest number of tourists.

While Erdogan’s unwelcoming attitude toward Israeli tourists may not cost the Turkish economy, it unfortunately takes away from the prospect of making Israelis and Muslims believe they can coexist together in peace. Turkey was the first Muslim majority country to recognize the State of Israel in 1949. Although Arab nations criticized Turkey for its relationship with the Jewish state, they also saw it as beneficial to their interests because Turkish diplomats were able to talk to all sides in the region.

Today, Turkey has lost that access to all parties in the Middle East. Although relations have become increasingly fragile, the unfortunate Mavi Marmara flotilla incident in 2010, when Israeli forces killed nine Turks off the coast of Gaza and injured dozens more, really tested the countries.

The traumatic incident pushed both sides apart, straining long historic ties between the two peoples. Days after the tragedy, Israeli Tourism Minister Stas Misezhnikov declared Erdogan as “Israel’s enemy,” while at the same time Erdogan argued that “Turkey’s problem is with Israel’s government, not its people.”

Since then, Turkey has asked Israel to meet three requirements in order to repair the relationship: apologize officially for causing death, pay compensation to the families of the victims, and lift the Gaza blockade.

But a UN panel, which was formed upon Turkey’s request, investigated the deadly accident and determined that Israel’s blockade on Gaza was legal under international law. Once this determination was made, Israelis gave up on the idea that they could repair relations with Turkey through compensation or an apology. They believed that Erdogan would not be satisfied until Israel lifted the Gaza blockade altogether.

And so bad-relations continued to fester. Nizar Amer, Israeli Embassy spokesman in Ankara, wonders if Erdogan was not against the people of Israel then why he unwelcomes them to Turkey today. “Erdogan said he had no problem with the Israeli people, so why [is he] taking that attitude toward them?”

Turks, on the other hand, see something else. They point to Israel’s travel warning just as the tourism season kicked off in March. The Israeli Prime Minister’s counter-terrorism office issued a warning urging Israelis to stay away from Turkey because of imminent attacks.

Since Israel is the most hated and criticized country in the region, Israelis take these travel warnings seriously. Earlier this year, citizens of the Jewish state were targeted in Thailand and India. An Israeli diplomat’s wife was wounded in New Delhi.

Amer explains that the travel warning was solely a “security issue.” Around the same time, Turkish media reported that the Quds force, a special unit of Iran’s Revolutionary Guard, had plans to carry out an attack in Turkey.

“People sadly attach our travel warning [to Turkey] to political issues,” said the spokesman of the Israeli Embassy in Ankara.

“The anger in both societies against the other is quite palatable,” says Henri Barkey, a MidEast specialist from Lehigh University. “The real danger is that under conditions of severe strain actions can be misinterpreted. The most problematic location is in the Eastern Mediterranean, where Turkey has challenged Israel’s right to extract gas from its own Exclusive Economic Zone.”

Unfortunately, the Turkey-Israeli alliance is a story of the past — and both sides are worse off.

Tulin Daloglu is a journalist and foreign policy analyst based in Ankara, Turkey.