A group of more than 150 politicians and activists held a press conference at a downtown Cairo hotel to announce the launch of the much-hyped “Egyptian Third Current” last week. Bassem Sabry writes about the meteoric rise of the movement, which includes almost every major secular, liberal and leftist party or movement. 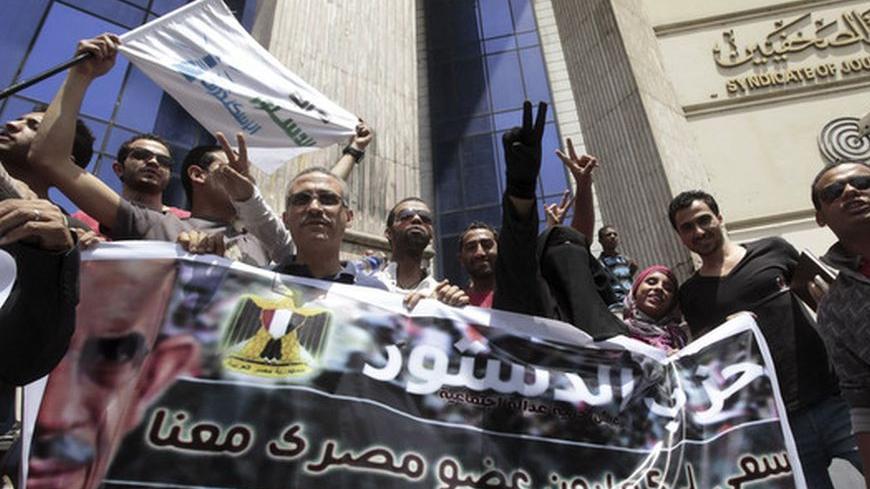 Last Thursday, a congregation of more than 150 politicians and activists held a press conference in a five-star hotel in downtown Cairo to announce the launch of the much-hyped “Egyptian Third Current.” The attendees included almost every major secular, liberal and leftist party or movement, a number of civil rights organizations, as well as the presidential campaigns of Hamdeen Sabahi and Khaled Ali. Even Mohamed ElBaradei’s “National Association for Change” and Al-Dostour party were there.

The purpose of the flashy gathering was to herald the commencement of a harsh and grueling undertaking: the establishment of a unified, progressive, civic-democratic political movement that would work to counterbalance Islamist political forces, the former ruling National Democratic Party factions and military institutions, and create what is at least a more balanced national political environment.

The call for such a political movement in Egypt is nothing new. One of its most recent iterations was the Egyptian Bloc alliance for the 2011 parliamentary elections, now significantly weakened compared to its initial grander aspirations, with the bloc’s three parties taking roughly only 9% of the vote.

Another concurrent, albeit much smaller, interesting experiment has been the Al-Adl party whose platform aimed towards an approach that was relatively progressive as well being calmer and less polarizing in its outreach. However, Al-Adl continued to remain a small organization, despite the substantial respect it garnered. Hopes for a strong progressive movement received a renewed breath of life when ElBaradei’s new “Al-Dostour” political party recently appeared on the scene, and raised the possibility of absorbing smaller counterparts into a larger whole.

But the meteoric rise of the concept of a “Third Current” came about after the surprisingly strong third-place finish by post-Nasserist presidential candidate Hamdeen Sabahi. Immediately after the announcement of the first round’s results, Sabahi and others argued — debatably — that most Egyptians voted for change, and a more centrist and moderate Egypt.

The argument centered on the calculation that nearly three quarters of first-round voters voted against the candidate most associated with the former regime — Ahmed Shafiq — while the same proportion voted against the more conservative candidate in the final lineup, Mohammed Morsi. That meant, according to their theory, that a majority of voters preferred moderate and civic-oriented candidates who represented a new mainstream.

According to Sabahi and other proponents of the theory, Egyptian people wanted a third way — a Third Current. Consequently, calls were made upon the third and fourth place winners — Sabahi and Abdel Moneim Aboul Fotouh, who together received nearly 9 million votes representing almost 40% of the first round total — to embark on that grand project and create a new broad national front that could redefine Egyptian politics.

As things stand, however, there are quite a few reasons to pause before getting excited about this undertaking. First, many of the faces in front of the cameras at last week’s press conference bring little new, except renewed resolve, to the table. Most of them have been in Egyptian political life for some time, and some already carry significant political baggage. Second, how does one succeed in the Herculean task of maintaining an umbrella of entities whose ideologies range from that of Egyptian Communist Party to the center-right Free Egyptians party?

Third, a unified “Third Current” faces challenge from its once-potential partners on the right. Moderate Islamist Aboul Fotouh and entities such as Al-Wasat Party seem to be understandably inclined toward having their unique independent “centrist current,” and Aboul-Fotouh has just announced intentions to form his own “Strong Egypt” Party based on his campaign’s political programme.

Losing such valuable potential allies and being faced with yet another attractive opposition force to its right, the “Third Current” would thus face the prospect of becoming framed as a less attractive fringe rather than a mainstream movement.

On the other hand, given how Aboul-Fotouh’s party and movement are expected to be significantly more progressive than both the Brotherhood and Salafists, they might end up being more of a boon for the “Third Current.” They could help better introduce and solidify many modern ideas such as equal citizenship rights, create a more multi-tiered political process, and avoid a Liberal-Islamist bipolarity that would do more harm than good.

But at the moment, there is much that could bring such largely varying parties and entities together under an umbrella of pragmatic convergence. All these movements want a more transparent and democratic political process on all levels of government; all want to ensure the regular peaceful transfer of power; all want to promulgate more progressive and modern stances as well as rhetoric on social, economic, religious and political issues.

All want a constitution that ensures a modern, progressive state with equal citizenship rights for everyone; all want the complete eradication of any remaining negative authoritarian and corruption elements of the Mubarak Regime. Further, all these groups are against the hegemony of the former regime remnants, the military establishment, or the Brotherhood and Salafist forces over political life.

Regardless of whether or not the country eventually ends up with any successful endeavors for a strong progressive political force, several factors are critical to the lasting rise of any such movement.

Ideologically, this new opposition movement should have a simple and firm core; an attractive and flexible political statement that can communicate with a broad range of Egyptians, convince and hopefully even inspire them. It must be firm in its progressivism, clear in its reasoning, yet clearly an outgrowth of Egyptian culture and heritage. It must also be able to easily respond to conservative criticisms against it. Its leaders must be able to connect and identify with the public by representing a wide segment of society and inspire immediate trust. They may include intelligentsia, politicians, spiritual figures, artists and even sportsmen. And as early as possible, the movement has to create its own fresh stock of of politicians. It must become the incubator of a new generation of untainted Egyptian political and national figures who can lead by looking forward, not backward, by bringing people together, not repelling.

Such a movement must be active in all of Egypt’s governorates. The aim of these branches should be to communicate with the Egyptian people, better understand the needs of their communities, as well as to develop local and specially-tailored social entrepreneurial solutions for them, and play an active role in developing their communities and building their capacity.

The branches would also lay the foundation of a vital and energized grassroots political involvement in the movement. These groups would be semi-autonomous in that they would still respond to the movement’s recognized leadership, but their activities and formation would be largely fluid. The vital role of youth and the need to banish elitism in these groups cannot be understated. And further building on the grassroots model, the movement has to be capable to quickly mobilize public actions and demonstrations whenever needed.

The role of peaceful street action has proven to be a decisive factor in both direct political pressure and the stimulation of public opinion in all of the Arab Spring nations. It can only play a greater — but hopefully more organized and safer — role in the future.

If the movement’s platform expands to economics, the platform should be closer to the center, the Third Way. Realistically, that would allow it to more freely push for both modern market-based and social-solidarity policies, both of which are direly needed in a country with significant number of impoverished, unemployed and underemployed citizens. Pragmatically, occupying the center would also allow the movement to continue to absorb many subsidiary groups, and survive being a bloc of wide ideological variety for a longer time.

But the movement should eschew focusing primarily on ideological discourse, and instead work on providing technocratic and pragmatic policy alternatives that can solve problems, generate benefit and appeal to the people. It would also profit hugely from having its own dedicated think tank.

Given the ideological stretch of such a movement (and other potential future similar endeavors), and since not all of the participating groups are actually political parties, the idea of creating full organizational unity in one political party is unfeasible, although partial unity — especially under ElBaradei’s new Al-Dostour party — is “theoretically” not impossible.

However, assuming it remains a voluntary association of independent entities, any such umbrella hoping for effective and efficient cooperation must still have selected leaders and a coordination structure, one that can fluidly make decisions and set strategies for the movement as a whole. Further, logistical and financial support for the movement must be varied, popularly-sourced and independent of any single particular wellspring.

Finally, the movement should find itself a simple, short, reverberant, impassioned and potentially lasting name that could immediately evoke inspiring sentiment. Something more eloquent, redolent, poignant and more worthy of historic recollection than, well, “the Third Current.”

Bassem Sabry is a blogger and writer who specializes in Egyptian and Middle Eastern affairs. His work has appeared in Foreign Policy and The Atlantic. He blogs at http://anarabcitizen.blogspot.com/ and can be found on Twitter at@Bassem_Sabry