Despite the cheers in Tahrir square, Egypt's new president, Mohamed Morsi, finds himself surrounded by increasingly hostile state institutions, while many of his countrymen fear for their nation now that an Islamist leader has come to power. Bassem Sabry writes that Morsi and other Egyptians must move quickly to overcome the many challenges facing Egypt. 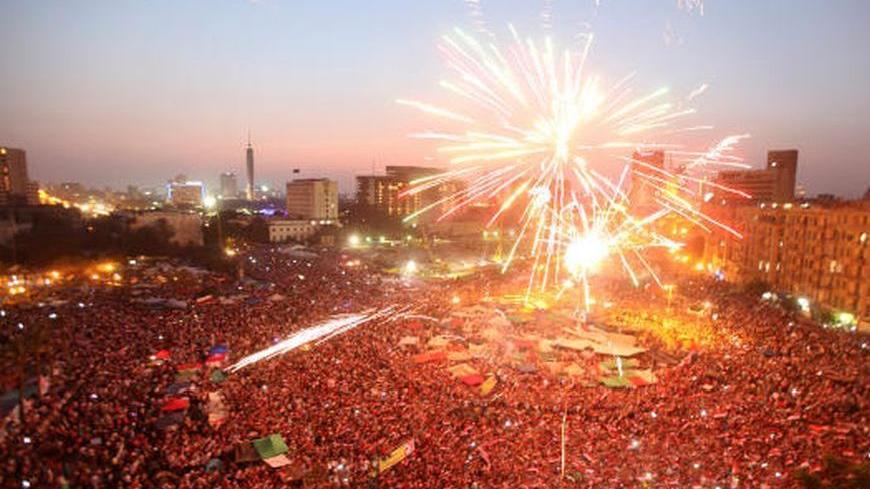 At approximately 4:30 on Sunday afternoon, Cairo’s Tahrir Square was filled with thousands of exhausted protesters listening silently to a 25-minute-long muffled reading of the presidential election results. The summer sun beat down on the Egyptian flags and banners as heat rose from the pavement. But relief, and reward, was soon to come. As the winner was announced the crowd erupted in a volcanic roar of jubilation, the likes of which I had only seen and heard once before, on February 11, 2011: the day Mubarak was toppled.

The crowd now grew at an incredible pace as an avalanche of celebratory newcomers arrived to the square. They euphorically cheered for what seemed to have been an increasingly unlikely prospect: victory for their candidate, the Muslim Brotherhood’s Mohammed Morsi. Days of speculation following the runoff elections had officially ended, and so had several nerve-wracking days filled with contradictory news leaks and “anonymous sources” making confusing statements. But now, Egypt officially has its first freely and fairly elected civilian president-elect.

However, not everyone was as jubilant. Outside of Tahrir, away from pockets of intermittent celebration, a quieter atmosphere prevailed in Cairo. For some, the mood was somber, even gloomy. Nearly half of Egypt's voters had cast their ballots for Ahmed Shafiq, mostly out of fear of the Muslim Brotherhood and because of a growing distrust of the Islamist group’s politics. Many also voted for Shafiq because they believe only he could bring immediate security and stability to the country.

And an almost equal number of those who voted for Shafiq or Morsi did not even bother to vote at all, exhibiting, in essence, a lack of excitement for either candidate — or the entire political process.

Disheartened talk of “leaving the country because it does not feel like home anymore” echoed around me on social media and in the downtown café I visited later in the evening. Rumors and fears of investors fleeing with their capital and expertise also swirled. And for some who voted for Morsi, they experienced a victory that was only partial, and bittersweet. Those voters saw Morsi as the lesser of two evils and a pragmatic and idealistic choice for a greater good. Consequently, they celebrated the fall of Shafiq, but not the rise of Morsi.

The president-elect finds himself at the heart of a difficult political position, both for himself and for the country. He is surrounded by increasingly hostile state institutions, the duration of his presidency is still subject to dispute, and his office’s constitutional powers have largely been stripped or reduced by the Supreme Council of the Armed Forces’ recent addendum to the Constitutional Declaration. Furthermore, Morsi’s election was preceded by the dissolution of a parliament whose legislative powers now rest in the hands of the SCAF, while a controversial and unpopular Constitutional Assembly is fighting to survive. And, to top it off, the revolutionary and political fronts are divided and distrustful toward both the president-elect and the Muslim Brotherhood.

Furthermore, many groups, including liberals and Coptic Christians, are understandably worried about the ascendancy of the Brotherhood to the highest office of the nation as well as the group’s potential domination of future political life. Investors are apprehensive about the volatile economic, political and security environments, while brain-drain and capital outflow is a significant fear in an already difficult economic situation.

For Egypt, and not just the president-elect, to escape this increasingly tightening bottleneck, some ideas seem to impose themselves upon the national discourse.

First, the new political regime, whatever its final form is, and the president must decisively and unequivocally reassure all disquieted citizens and investors that Egypt is still their home, and always will be. There will have to be strong guarantees that the political, economic and social landscapes of the country will not experience intentional and drastic transformations that could be destructive to the business and economic environment and to the daily lives of ordinary citizens.

Morsi must embark on a deep national reconciliation process and adopt rhetoric that unites people. It is imperative that, in the course of this unique post-revolution presidency, he appoints a cabinet that is diverse and not dominated by conservative political forces.

His vice presidents and his prime minister must be strong and capable statesmen in their own right. They should come from different political backgrounds, have clear prerogatives and agenda, acquire the powers to decisively affect key decisions of the presidency and the executive, and gather around them personnel that reflect the diversity of the nation. Morsi needs this not just for the sake of political idealism, but as crucial reinforcement in his fight for any real political power.

Progressive political groups should unite under an umbrella that allows them to better coordinate their efforts and play a more effective and needed role in national life. By and large, the time for what former presidential candidate Hamdeen Sabahi proclaimed as the “Egyptian Third Current,” after conservative and pro-establishment political forces, has come. These progressives must develop a discourse that can reach the people, and they have to establish a true presence on Egypt’s streets and rural areas that can allow them to become a popular movement. Moreover, they should strive to maintain dialogue and political cooperation with conservative political groups — a dialogue that is especially vital as the pillars of the second republic are being built — without abandoning their core ideals and defining positions.

Additionally, the full spectrum of national political forces need to immediately reach a consensus on the spirit and content of the next constitution of Egypt. This would send a clear message to Egyptians and to the world that Egypt’s political future will have less uncertainty and political infighting than it has recently, and that existing political forces have what it takes to push the country forward during its most existential of moments.

Finally, Mohammed Morsi must attempt to prove to everyone that he, and the Brotherhood, can champion the creation of a modern, progressive, inclusive and prosperous Egyptian state that will be a source of pride to every Egyptian, regardless of gender, religion and background.

Egypt remains in an onerous and grueling position, one that could easily and swiftly become even worse. Nevertheless, the country can move forward and do so immediately, in leaps and bounds, if its political forces demonstrate the sufficient courage and mettle to rise to the responsibility that this moment dictates.

Bassem Sabry is a blogger and writer who specializes in Egyptian and Middle Eastern affairs. His work has appeared in Foreign Policy and The Atlantic. He blogs at http://anarabcitizen.blogspot.com/ and can be found on Twitter at @Bassem_Sabry