Syria: The Cadence of War

The daily rhythm of life in Syria goes on as it must, writes Rania Abouzeid. Families have been divided and some see little point in planning for the future, but many resilient children seem to have acclimatized better than their elders, accepting sniper fire and the idea of death as small cause for concern. 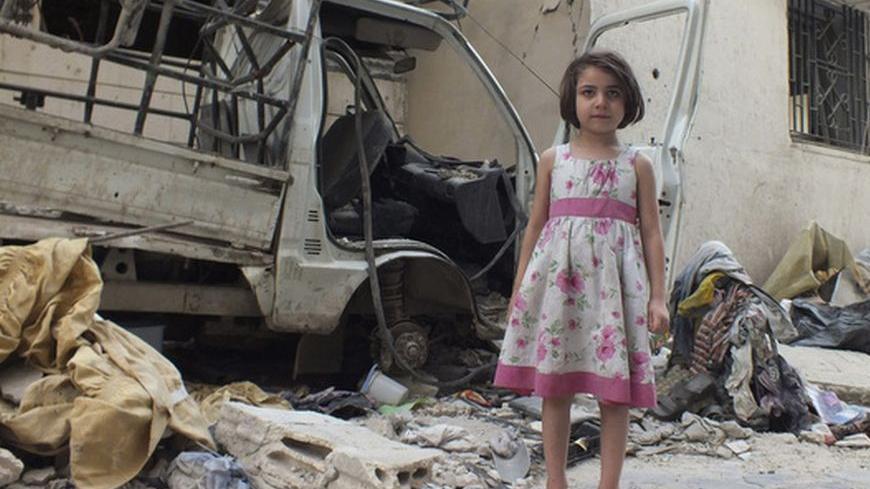 SARAQEB, Syria — The three little girls crouched in their starting positions, each placing one leg in front of the other, ready to pounce on the count of three: “One, two, three!” their aunt said as the sisters, all under 10, raced some 20 meters to the top of their narrow lane, giggling, before turning around and sprinting back toward their aunt, seated outside their front door. It was a stiflingly warm night, near pitch black. The electricity was out and the family had moved outside, the pleasant breeze providing a little respite from the heat.

Two nights earlier, another family — the Breks — had done the same thing. They lived in another neighborhood in this town of some 40,000 in central Idlib province. The young children were playing outside. Their mother Sakina had just finished boiling tea and was bringing it outside when the rocket landed in their street. She was killed along with three other women from their family. Her young son, no more than eight or nine, was already dead when he reached the Hassan Hospital. His bright red t-shirt was stained a deeper shade by his blood. His baby sister Suheila, dressed in a blue t-shirt and white shorts, her pudgy toddler legs covered in patches of blood, no longer had a face. Her head was an indiscernible mashed up pink blob of flesh and blood.

The Brek family tragedy wasn’t lost on the aunt as she watched her young nieces playing, but faith and fatalism were like soothing balms. “They were sitting here just like us,” she said. “It’s frightening what we have gotten used to. Death will find us if it wants to, if God wills it, but we are changing, becoming harder as human beings.”

The once-peaceful 17-month Syrian conflict quickly morphed into a vastly asymmetrical war, fueled by the iron-fisted response of a regime that tolerates no dissent. War has its own cadence, its own logic. It’s a mix of the mundane, the everyday, experienced through heightened, sometimes supercharged emotions. It’s the thrill and fear of a fighter approaching the frontline, or a person heading out to demonstrate, the prayers of their family, the concerns of a mother, the tears of a child. “Normal” becomes relative. The daily rhythm of life goes on seemingly unaffected, but there is always an undercurrent of tension, the knowledge that a single, sudden event can upend everything. Even death and its rituals have changed. Mourning periods, usually weeks and even months long, are abbreviated — otherwise, as one woman said, the town and others like it would perpetually be in mourning.

Families have been physically divided. Some men have ferried their wives and children to Turkey and returned to fight or protect their homes from looting. In other cases, it’s the rebel fighters who have traversed the border, to organize supplies and support for their men.

“Why have you come back?” a fighter’s mother, a heavyset woman in a beige scarf asked her 40-year-old son as he knelt before her and kissed her cheeks. An FSA commander, the man had fled to Turkey two months ago after an assassination attempt, a hail of bullets that targeted his vehicle, wounding him and killing one of his best friends.

“Is that any way to greet your son?” he asked.

“I”m happy to see you, but I’m afraid for you,” his mother said. “You should leave.”

The commander, like so many other rebels, keeps a grenade with him at all times — even during dinner or when he’s playing with his children. It’s a last resort to avoid capture. “I’d rather die a thousand deaths,” he said, “than be captured by them.” It’s a phrase often repeated by other rebels, here and elsewhere.

On a recent afternoon, eight women, all relatives, sat in the inner courtyard of their matriarch’s home. They joked and laughed as they picked the leaves off bundles of green molokhia stalks spread out on blankets in front of them. The leaves would be left out to dry for days before being stored for the winter mouni, or supplies. Their men sat in an adjoining room. “Why are they bothering?” said one. “Will we live till the winter?”

One man said he no longer allowed his family to gather in the same place, especially when the thuds on the outskirts of town intensified. He would scatter his children in different rooms in his house, so that should a shell fall nearby, somebody, he figured, might survive.

On another night, another family debated where in their home they should take shelter: Under the stairs? (What if the stairs were hit and collapsed?) In the basement? (There’s only one door, no windows; what if it’s blocked?) The back room? A shell had come through its wall several months ago, and had been crudely patched up with concrete. They decided to take their chances in the little nook under the stairs.

The cellular phone network and Internet service have been out for months in Saraqeb, although the landlines still work. At the sound of an explosion, townspeople work the phones, calling friends in different neighborhoods to try and localize the blast. It’s too dangerous to step outside. The Syrian army rings the city; its tanks are stationed in three different locations — at the olive-oil factory, the dairy factory and at the old radio station, or Iza’a. Loyalists also operated a checkpoint, the Kaban Checkpoint, but rebels took that out on July 19. The price was high; 25 dead, many of whom were civilians.

The three-starred rebel flag flies in Saraqeb but there are still regime loyalists here, and informers, too, derisively called fassafees by their opponents. On one morning, a “sticky bomb” — a small explosive attached to a magnet or adhesive — was planted on an alleged informant’s car. It wounded but did not kill him. “This is a revolution of the streets,” the mother of a rebel Free Syrian Army fighter said after news of the attempted assassination spread, “and the streets know each other.”

There are some streets that are too dangerous to traverse. There are clear, new additions to the already high stone walls around people’s homes in some neighborhoods, especially around what the locals have dubbed “Moharram (Forbidden) Street." “Nobody crosses here after 8pm because of the snipers,” my guide said as we passed through it at 7.36pm.

Other walls tell different stories. There’s a painting of Spongebob Squarepants carrying a Syrian revolutionary flag on a wall near a local school. Dora the Explorer may soon join him, when the local activists find somebody who can draw her. They’re debating if Mickey Mouse should also be there, to cheer up the children.

But some children, resilient little things, seem to have acclimated better than their elders. “It’s just a sniper,” Ruha, a nine-year-old girl told her mother, who flinched at the sound of the bullet nearby. It hit the outer kitchen wall, which faces the street.

It’s the same street Ruha and her two sisters were racing along as their aunt counted to three and watched her panting nieces sprint to the top of their lane.

“Will you be with us at zero hour?” the aunt asked me, that same night.

“What does that mean?” Ruha said.

“It means when we’ve run out of time, when [Kofi] Annan’s [peace] plan and all the demonstrations mean nothing. When our fate will be decided.”

Ruha nodded. She had understood.

Rania Abouzeid is a Middle East correspondent for TIME. You can follow her on Twitter:@Raniaab