Russia, through its missions in the Middle East, has been building alliances with Orthodox Christians to strengthen its support base and counter Western criticisms of its Syria policy, writes Nasser Chararah. 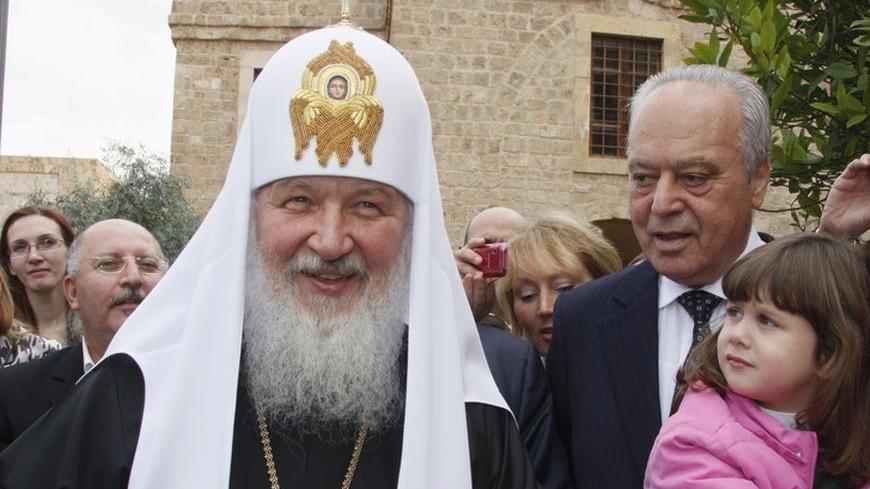 Patriarch of Moscow and All Russia Kirill is surrounded by the Russian community, after a welcoming religious service at Saint George Orthodox Cathedral in Beirut, Nov. 14, 2011. - REUTERS/Mohamed Azakir

The origins of the Russian embassy building in Beirut stretch back to the beginning of the last century. It became a Russian property when it was taken over by a group of ecumenical missionaries. However, it was closed at the beginning of the First World War because the Ottoman Empire, which was occupying Beirut at the time, was at war with Russia.

These days, Russian embassy diplomats in Beirut are proud of the symbolism of their storied headquarters. One of the reasons for this is because of is its notable location in a neighborhood which boasts a mixed demography, wherein Orthodox Christians, Sunnis, Shiites and Druze all live side by side. One senior embassy staff member said, “Moscow was considering moving our embassy to another area of Beirut, but that idea has been abandoned.”

It is not without political considerations that these days the Russians are focusing on the legacy of their presence in Beirut, and emphasizing the historical symbolic significance of their embassy. For with the start of the events in Syria, Russian rhetoric towards Lebanese lawmakers has become more focused on the Christian Orthodox dimension. The differences between the goals of the Christian missions in Lebanon and their Russian compatriots have begun to appear. The former used to teach Russian to young Lebanese as a means of increasing the influence of Russian culture in this country, whereas Ecumenical missionaries learned Arabic, because their goal was only to disseminate education and learning.

Moscow is retroactively using the morality of its missions to conceal its true goal: responding to the Western attack against them, which depicts the Russian stance towards the events unfolding in Syria as a moral scandal for Russian foreign policy.

Moscow recognizes the important cultural role Lebanon plays in the Arab region, and therefore it decided to make it its strategic launch pad regarding foreign policy in the Arab world. Its overarching moral message is protecting and supporting the minority groups of the region.

Over the past few months the Russian embassy has mobilized friendly civil society organizations in Lebanon, most of which are Orthodox, in order to put on various events showing Moscow's support for minority groups in the region.

In March, these events will have reached their climax, when Russia — primarily in coordination with Orthodox civil society organizations in Lebanon, in addition to other friendly organizations — hosts a conference in Beirut for Arab minority groups.

The most notable observation about the coming conference is that only Christian minority groups will be invited. This explains the political aspect of its new strategy towards the East, which aims at creating a backbone of Christian minorities with which it may ally. This is happening against the backdrop of the West’s relatively new undertaking of allying with different political Islam groups in the region; this policy began when it aided these groups' rise to power in Arab countries for the ostensible reason of supporting the Arab Spring.

Russians consider the Orthodox population, which is the majority group among all Arab Christians, a trump card for implementing their new Eastern strategy. Recently, the Russian embassy in Beirut has intensified activities connected with the Orthodox dimension of its foreign policy. For example, several days ago at the Russian cultural center during a celebration commemorating the embassy’s establishment, embassy personnel distributed a book translated into Arabic detailing the Russian presence in Lebanon since the nineteenth century. The book appeared to place most of its focus on the history of the Russian Orthodox more than any other group.

Behind the scenes, the Russian embassy is encouraging ideas of Lebanese-Orthodoxy, which aim to create a “political and sectarian Orthodox independence” that would mimic what currently exists among other communities, including Shiites, Sunnis, Maronites and Druze.

Progress was recently made in this regard when the Orthodox Gathering (a political gathering of the Orthodox elite) called for the formation of an Orthodox community council. The gathering also proposed an electoral law that would have the sects exclusively elect their respective representatives, a move which would Russia would support. This would in effect create a political Orthodoxy presence, similar to the already established groups of political Sunnis, political Maronites and political Shiites. However it is important to bear in mind that ever since independence, the Orthodox population of Lebanon has always placed itself outside of the sectarian alignment process, with only some of them embracing the political Maronite movement.

Behind the scenes recently, a stealthy struggle for influence over the Orthodox community in Lebanon has been playing out between the Americans and the highly motivated Russians. Among those most opposed to Russia's approach within the Orthodox community is the Patriarch Ignatius IV Hazim, along with other archbishops, but they are in the opposition for different reasons. Patriarch Ignatius IV Hazim, for example, wants to keep politics and religion separated in order to prevent Orthodox politicians from interfering in the affairs of his church. As for other archbishops, led by Archbishop Elias of Beirut, their reasons for opposing this trend are political, according to Moscow’s interpretation. Moscow does not hesitate to describe this approach as "crude." For when Russian Patriarch Kirill I visited Lebanon a year ago, they refused to welcome his visit in proper manner, and instead sent an employee to greet him.

Nasser Chararah is a contributing writer for Al-Monitor's Lebanon Pulse, head of the Lebanese Institute for Studies and Publications, a writer for multiple Arab newspapers and magazines, author of several books on the Hezbollah-Israeli conflict, and has worked for the Palestinian Research Center.