Al-Monitor's Barbara Slavin writes that by trying to push the US government to agree to “red lines” for Iran, Israeli Prime Minister Benjamin Netanyahu is alienating US officials and many other Americans. Netanyahu should not overplay his hand and let his fear of Iran drag the US into a third war in the region in a decade. 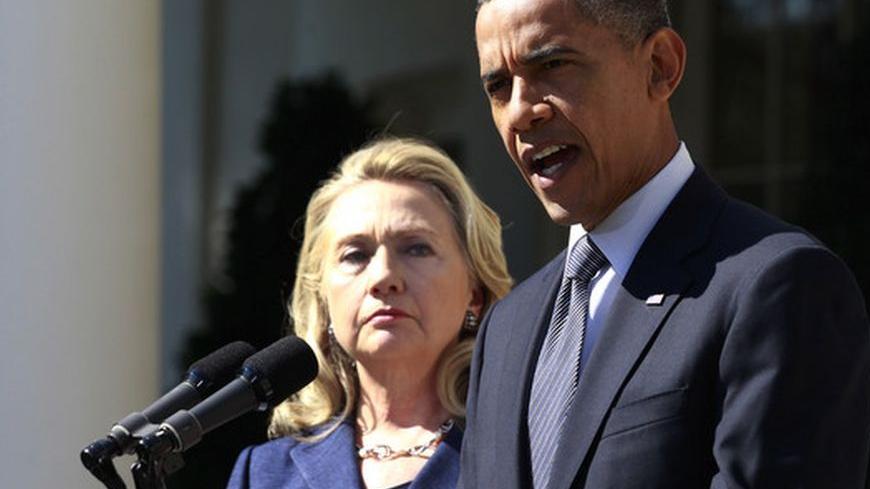 US President Barack Obama delivers a statement alongside Secretary of State Hillary Clinton, following the death of the US Ambassador to Libya, Chris Stevens, and others, from the Rose Garden of the White House in Washington, September 12, 2012. - REUTERS/Jason Reed

Two news stories in the headlines Wednesday point to a dangerous and growing gap between the leaders of the US and Israel in analyzing the changing realities of the region and how to deal with them.

While Israeli Prime Minister Benjamin Netanyahu was issuing what sounded like an ultimatum to US President Barack Obama on Iran — demanding that the US openly announce its “red lines” for Iranian nuclear development — young Islamic fundamentalists apparently enraged by a racist American movie about the Prophet Mohammed attacked US diplomatic outposts in Egypt and Libya, killing US Ambassador to Libya Chris Stevens and three other Americans.

At a time when populist Islamist movements are on the rise throughout the Arab world, constraining Israel’s freedom of action against its traditional adversaries — the Palestinians and Hezbollah in Lebanon — Netanyahu should not let his fear of Iran drag the US into a third war in the region in a decade.

Pro-Western, secular forces in the Middle East are already in peril, and fragile new democratic governments cannot adequately police their frustrated and angry young constituents. A US attack on Iran would pour gasoline on the flames and regain for Iran the Arab street support that Tehran has lost through its support for the murderous regime of Bashar al-Assad in Syria.

Iran would feel justified in actually building nuclear weapons and the international coalition against Iran so painstakingly assembled by the Obama administration would be destroyed, making it easier for Iran to reconstitute its nuclear program.

Supporters of Netanyahu argue that he is right to insist on a more public and credible US military threat against Iran to convince Iranian leaders to suspend their nuclear advancement.

Netanyahu and his backers may also be right to suspect that Obama does not intend to go to war with Iran even if it develops nuclear weapons. But the Israeli leader’s increasingly aggressive statements directed against Obama during a US presidential election year smack of both political desperation and poor judgment.

Recent polls show that 70% of the American people do not think it is worth attacking Iran to try to prevent it from developing nuclear weapons — and a majority would not join an Israeli strike against Iran. For someone partly raised and educated in the United States, the Israeli prime minister is profoundly misreading the American mood.

Instead of pushing the US government to agree to “red lines” beyond which Iran cannot cross, Netanyahu is alienating US officials and many other Americans — including those who count themselves pro-Israel. The Israeli prime minister is repeating a pattern of ill-considered behavior that made the administration of Bill Clinton so furious at him that Clinton’s campaign advisers eagerly went to Israel in 1999 to work for Netanyahu’s then political rival, Ehud Barak.

Barak, now Netanyahu’s defense minister, has wisely abandoned his calls for military action against Iran before US presidential elections.

The former Labor party leader tried to tamp down tensions with the US, saying Tuesday, September 11, that these differences should be resolved “behind closed doors” and adding “We must not forget that the US is Israel’s most important source of support in terms of security.”

If Netanyahu expects the US to continue that support indefinitely, he should not overplay his hand. It will backfire against him both in Israel and the United States and do no good for Israel’s long-term security — even if Mitt Romney becomes the next US president.

The murder on the anniversary of 9/11 of Chris Stevens — a talented and brave Arabist who spent his career trying to understand the Muslim world and to educate his American bosses about it — is a sobering event. As this tragic violence shows, we are in for a very difficult period in a region that has already seen too much bloodshed and misery. This is a time for considered action, for thinking before speaking, and for the closest possible cooperation and understanding between friendly nations and leaders.