Al Jazeera Arabic’s love affair with the Muslim Brotherhood was clear from the channel’s beginning, writes Sultan al Qassemi. And since the Brotherhood decided to run a candidate for the Egyptian presidency, the channel has blatantly promoted him. What viewers end up with is propaganda, and it's damaged more than one revolution. 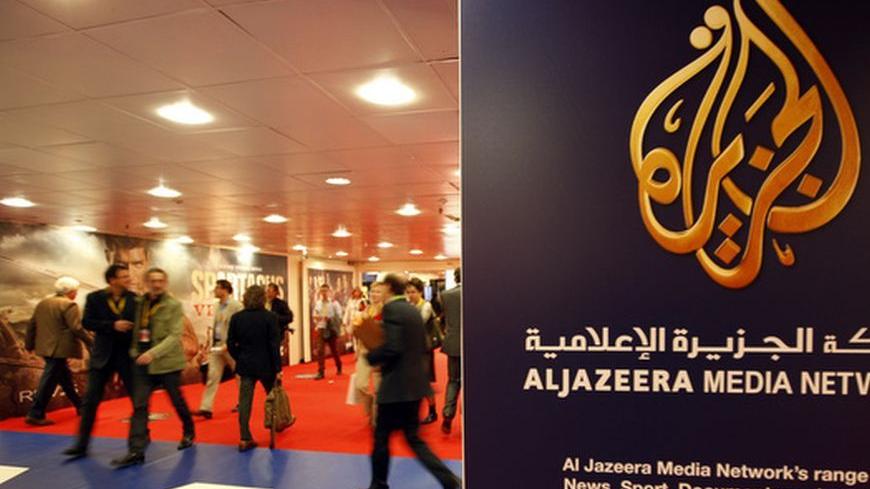 The logo of Al Jazeera Media Network is seen at the MIPTV, the International Television Programs Market, event in Cannes April 2, 2012. - REUTERS/Eric Gaillard

“Mohammed Morsi reminds Egyptians of President Gamal Abdul Nasser.” Thus proclaimed Al Jazeera Arabic’s Cairo bureau chief Abdel Fattah Fayed shortly before the new president was due to take oath, apparently in reference to his down-to-earth behavior. Not only was this statement incorrect, it would ironically be offensive to Mohammed Morsi himself, who only a day before deplored the Nasser era using Koranic language. And yet, this is only one minor incident in the channel’s history of romancing the Muslim Brotherhood and its victorious candidate President Mohammed Morsi.

Al Jazeera Arabic’s love affair with the Muslim Brotherhood was evident from the channel’s beginning. Its chief religious program’s main guest is none other than Yusuf Al Qaradawi, a long-time Muslim Brotherhood member and resident of Qatar who has taken that state’s citizenship.

Since the Muslim Brotherhood decided to run a candidate, the channel has spared no effort in promoting the candidate through its various channels. Al Jazeera’s management showed great foresight when, mere days after the fall of Mubarak, it launched Al Jazeera Mubasher Misr, a channel dedicated to Egypt 24/7 that by the account of a close Egyptian friend and an astute observer of Egyptian media, has been dedicating its coverage in favor of the Muslim Brotherhood around the clock.

This relationship is mutually beneficial, of course. Due to its blatant bias toward the Muslim Brotherhood, Al Jazeera has gotten to host some of the most influential political actors in Egypt, such as Khairet El Shater, the deputy supreme guide of the group on multiple occasions. Ahmed Mansour, Al Jazeera Arabic’s star anchor and Muslim Brotherhood member was rewarded with several interviews with not only Khairet El Shater, but also General Guide Mohammed Badie and Mohammed Morsi. The Brotherhood also appreciates this relationship and even bizarrely extends official congratulations and “support” to Al Jazeera on significant occasions. When Morsi’s office wanted to kill the story of what seemed to be a fabricated Iran news-agency interview with the president, it knew exactly who to call.

Why is this romance dangerous? President Morsi has touched many through his requests not to have his photos hang in government institutions and that funds for newspaper advertisements congratulating him be given to charities instead. Al Jazeera is compromising the opportunity that Arabs may have today to finally witness a human president instead of the infallible deities that dot the Arab world. Al Jazeera’s endless praise of President Morsi, reminiscent of the discredited Abdul Nasser propaganda outlet Sawt al Arab, may in fact backfire one day.

Following Morsi’s swearing in, Mamdouh Ismail, a Salafist member of the dissolved parliament, has called on Egyptians not to “overly praise the president-elect and transform him into a Pharaoh.” According to Egypt Independent, he would do well to direct the same request to Al Jazeera Arabic.

The alliance between Qatar, the host and backer of Al Jazeera, with Egypt’s Muslim Brotherhood is no secret. The Gulf state hosted Khairet El Shater in March for several days, and the Emir was among the first Arab leaders to congratulate Morsi by telephone. Qatar has also promised $10 billion worth of investments in Egypt, a significant amount that certainly will keep it in the favor of the ever shifting Muslim Brotherhood for the foreseeable future. Additionally, last year, Al Jazeera network appointed a ruling family member to take over from its resigned Muslim Brotherhood ex-boss Wadah Khanfar as the channel’s new head, which increased speculation that the channel’s coverage will continue to be in line with the state’s pro-Islamist agenda.

Al Jazeera Arabic’s pro-Brotherhood methodology is two-pronged. First, it predominantly hosts guests that it can be fairly certain would be gentle in their criticism of the Muslim Brotherhood, and second, its anchors refrain from asking Muslim Brotherhood members and spokesmen embarrassing questions. Although I am a firm believer in giving the group a fair chance, this is not the duty of what is supposed to be a neutral news channel.

The following are some examples I have come across: On June 22, 2012, Al Jazeera’s correspondent Ayyash Darraji interviewed a woman for three minutes and allowed her to criticize former presidential contender Ahmed Shafiq without any interruption. As soon as the lady said one critical word about Morsi, he pulled the mike and cut her off. On June 18, hours after Morsi officially quit the Muslim Brotherhood, Al Jazeera Arabic’s bureau chief Abdul Fattah Fayed naively announced that “Morsi is no longer obliged to the Muslim Brotherhood,” an organization that spent tens of millions of Egyptian pounds to get him elected. The channel also reported on the day Morsi was sworn in that he “deserves a military salute if only because his wife asked to be called 'Um Ahmed'” instead of the “First Lady.” On the day that Morsi took office, Kamal Helbawi, the former Brotherhood spokesman in Europe, started criticizing Morsi’s time-keeping and Cairo bureau news anchor Mahmoud Mourad interrupted him and said, “We in the news industry are used to that.”

There are countless other examples of the station’s blatant bias toward all things related to the Muslim Brotherhood. Indeed, Al Jazeera Arabic’s bias toward the Muslim Brotherhood goes beyond the TV channel and is readily found on its website. Here is a sample of the headlines after Morsi’s win: "Wave of Arab and worldwide welcome for Morsi victory," "Morsi assures & vows to continue the revolution," "Morsi was born with the military [regime] to defy it," "Syrian revolutionaries rejoice over Morsi victory," "Israel concerned over Morsi victory," “Gaza celebrates Morsi’s victory” and so on.

In fact, one online report claimed that less than 24 hours after Morsi’s victory, the situation at the Rafah crossing had turned “upside down” and that people were going through the border “with ease,” a highly unlikely development seeing that he had yet to assume authority. Based on Al Jazeera Arabic’s online narrative, Morsi is depicted as an Egyptian warrior, born destined to fight the Egyptian army into submission and championed by oppressed Arabs while at once terrifying their archenemy, Israel. The channel, of course, neglects to mention that President Morsi repeatedly vowed to honor international treaties, in reference to the Israeli-Egyptian peace accord, not to mention his repeated praise of the army.

Simultaneously, the channel continues to host clownish supporters of the brutal Al Assad regime in order to give its viewers a certain impression. The Lebanese newspaper Al Akhbar uncovered that the channel’s bias toward the SNC is due to it having assigned the “Syrian desk” to Ahmad al-Abda, who goes by the name Ahmed Ibrahim in order to hide his link to his brother Anas Al Abda, a Muslim Brotherhood member of the SNC. One Arab source within the channel confirmed this to me in a private Twitter message. Similarly, in Palestine, Al Jazeera Arabic scores major coups in uncovering the rampant corruption of the Palestinian Authority but neglects to mention democratic setbacks in the Hamas Muslim Brotherhood-controlled Gaza strip.

On a personal level, I have found President Morsi’s speeches to be impressive; he seemed balanced and ticked many of the right boxes. Whether he will keep his promises is another matter altogether. However, rather than be informed on Morsi, Al Jazeera Arabic viewers are gently guided toward a glorifying narrative that lacks scrutiny and neutral analysis. What Al Jazeera Arabic viewers end up with is nothing less than blatant propaganda for the Muslim Brotherhood.

Sadly, there is no other single channel to carry the mantle that Al Jazeera Arabic has so readily done away with. The best Arabic-language speakers can do now is to flip between two or more channels that carry a different narrative in order to arrive as close as possible to the truth.

Al Jazeera Arabic’s bias toward the Muslim Brotherhood is now largely institutionalised, having survived more than one boss. It is important to note here that the same narrative does not plague Al Jazeera’s English-language version of the station. Al Jazeera Arabic today is actively taking part in reconstructing the image of the Arab “dictator leader” that Arabs have gotten used to since the 1950s, where the media is instructed not to criticise the president or monarch. Morsi’s much-deserved win isn’t only Al Jazeera Arabic’s loss but a major blow to the channel’s credibility and a loss to its viewers. When it comes to the coverage of the Muslim Brotherhood, the once-great channel’s famous slogan, “The Opinion and the Other Opinion,” no longer holds true.

Sultan Sooud Al Qassemi is a UAE based political commentator. He tweets as @SultanAlQassemi

To read the Arabic translation of Sultan Al Qassemi on Al Jazeera Arabic's bias toward the Muslim Brotherhood, click here.