In Libya, Ballots Triumph Over Bullets

Huda Abuzeid took part in Libya’s first elections in 40 years, and the first since dictator Moammar Gaddafi’s regime fell last year. She says Libyans look forward to seeing what their first elected government can do to address the security and economic problems that have plagued the country in the past year. 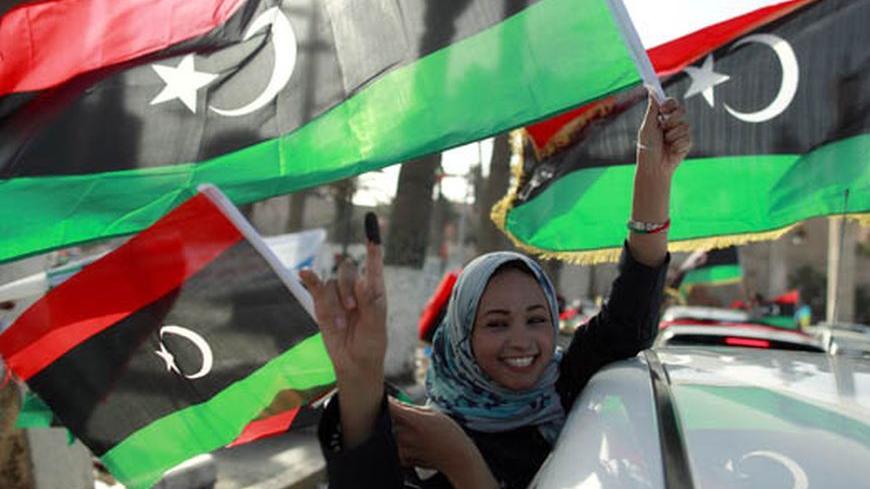 A woman celebrates on the streets after casting her vote during the National Assembly election in Tripoli's Martyrs square 07/07/2012. - REUTERS/Zohra Bensemra
July 8, 2012

Walking through Tripoli’s streets on Saturday, the celebratory atmosphere was visible and audible across the city, and it was difficult as a Libyan  not to get caught up in the emotions on display. Having been denied even a local council election for forty years, the city’s population was determined to enjoy this historic day, the country’s first national elections since the 1960s.  I felt so happy and proud of my fellow Libyans.

People smiled at me, waved their flags and honked car horns as they drove through the streets.  Fingers were held up in victory signs – something I hadn’t seen since the one year anniversary of the revolution – except this time most of the fingers were stained in indigo ink: a sign they’d been up early and already voted.

A young mother named Nada, who declind to give her last name, had been at the polling station since 7:15am with her family.

“This is the best day of my life,” she said.  Her voice was already hoarse from all the celebratory cries.

“Allahu Akbar! I cannot stop smiling,” she said “I’m so happy for us. Gaddafi is gone and we’re voting!”

Seventeen months after the start of the February 17 Libyan revolution that led to the end of Moammar Gaddafi’s 41-year dictatorship, the day many thought impossible had become reality:  Libya was holding its first national elections since before Gaddafi’s military coup in 1969.

In the streets I saw men hugging and embracing; tears flowed from the eyes of both  men and women. I felt the significance of the day and the price that had been paid to get here.

I walked to my local polling station, called the Dhara station, passing by mosques where the cry of ‘Allahu akbar’ (God is Great) rang out continuously.

At the voting station, I joined the women’s line (men and women are divided into separate lines and polling booths).  For the women standing in the queue, this vote was important and they discussed and explained to each other the pros and cons of each party.

The discussion was all the more significant as the night before a well known religious scholar, Sheikh Sadiq Al-Ghiryani, had appeared on a government TV channel and urged Libyans not to vote for former National Transition Council leader Mahmoud Jibril’s party, as he said Jibril was an “extreme secularist.”

In front of me a woman named Soad Mismari was confused and unsure after seeing the Sheikh’s speech.

“I was going to vote for Jibril, but now I don’t know who to vote for,” she said to the women around her.

“Is that who you’re voting for?” I asked her. The woman smiled defiantly.

“No I’m voting for Jibril!” she said. “He’s a wise strong man who will fix Libya’s problems. I don’t care what anyone says.”

The separation of women and men at the polling stations is in accordance with the country’s conservative traditions, which mandate that men and women who aren’t related not be in close quarters.

But as I listened to the women talk back and forth in line as we waited to vote, I realized the division  had an unintended consequence: it allowed women, who had registered to vote in high numbers, to decide independently who they chose, free of their husband’s or father’s pressure or choice.

Another observation I made was that the majority of women at the polling station were dressed conservatively, their heads covered in the Islamic headscarf.  I was one of the few with my hair uncovered.   Despite this fact, the overwhelming choice seemed to be for the secular-leaning Mahmoud Jibril, rather than the parties with a stronger Islamic identity such as the Muslim Brotherhood’s  ‘Justice and Development’ party, or ‘Watan’ (The Nation Party) led by former Islamic Fighting Group commander Abdel Hakim Belhaj.

The women were very well informed about each of the parties and candidates.

“I would vote for that party,” one woman whispered to me, “but I’ve known the candidate since he was a boy and I wouldn’t trust him with a tin can let alone the country.”

These were the kinds of personal details that, for many, counted as viable information on which to judge a candidate.  With more than 4000 candidates running for only 200 seats in the new National Congress, many Libyans were overwhelmed by the number of choices.   Sometimes their vote, like this woman’s, boiled down to who they knew personally or through family contacts, or who was famous enough to have made an impact through the noise of billboards and posters.

Once I’d dipped my finger in the ink and voted, I stepped out of the station and a crowd of women started ululating and cheering in celebration at my stained finger. It’s a cliché, but it was like a wedding scene.

By evening, long after the polls had closed, there was a sense of relief that the elections had generally gone smoothly, despite weeks of worries about security.

Head of the High National Election Commission, Nuri Abbar, reported a 60% turnout with 1.6 million of the 2.8 million registered voters taking part in the historic day.

“The winners are the Libyan people,” he said.

The candidates who win the election will take seats in the new National Congress, responsible for appointing a prime minister and cabinet, making laws and possibly appointing a body to write a new constitution.

The National Congress will be the first legitimately elected and mandated authority since Libya’s uprising began last February.  The National Transitional Council has managed the country since the fall of Gaddafi’s regime last August.   Many are disappointed with the Council and are ready for a new government.

“They will answer to us now” said Amal, a 28-year old radio presenter, “We didn’t know who the NTC were and they didn’t want to tell us. Now we know who represents us and they know their job depends on us.”

The government will have to resolve the issue of the armed and independent militias that still remain in the capital and around the country, the security issues stemming from tribal clashes and disenfranchised ethnic minorities in the south, the eastern pro-federalist movement, and rise of a confident new group of conservative Islamists who deny the legitimacy of elections as a way to choose a government.

Another big test of the new Congress’s performance will be the country’s economic performance.  The unemployment rate is an estimated 30% and salaries average between 400 and 600 Libyan Dinars a month, about $312 to $468.  Libyans are bitter that their oil-rich country, which sits on the largest petroleum reserves in Africa and 2% of the world’s total supply, cannot provide a better standard of living for its people.

Khaled, a 21 year old driver from Tajoura, told me: “We have money, we want to be like Dubai. Its time for me to get married and buy a home. I can’t do that on 500 dinars a month. Everyone is making money, now it’s time for us.”

Other issues remain as well, and in some areas protesters and militants threatened to shut down voting, especially in the south and east.

In Libya’s second largest city and the capitol of its eastern region, Benghazi, members of the so called “federalist movement,” who object to what they say is the under-representation of Libya’s eastern region in the distribution of seats for the National Assembly, openly stole and burned ballot boxes and turned people away from polling stations. My friend Rabaa’ called from Benghazi to say she had managed to vote but was disgusted by the behavior she’d seen.

“The thugs were taking ballot boxes out and weren’t scared at all,” she said.  “They told people to go home and that there would be no voting.”

As a result, citizens formed human protection chains around voting stations as rumors spread that the federalists would attack them.

By the close of voting, officials said eight polling centers in Benghazi were not able to operate.  Voter intimidation and violence closed another 18 voting centers in other parts of the country, out of a total of more than 1500 stations in all of Libya.

Although securitiy, economic and other challenges remain, today was a victory for the Libyan people and a demonstration of the majority’s dedication to a peaceful transition to representative government.   The road may not be without bumps, but today gave me hope that we are on the path toward a brighter future.

Huda Abuzeid is a British-Libyan journalist and TV Producer who returned to Libya for the first time in 30 years at the start of the country’s revolution. She now lives in Tripoli.