In an exclusive interview in Washington with Al-Monitor's Barbara Slavin, former interim Prime Minister Mahmoud Jibril describes Libya as a "stateless society" requiring assistance from the United States and other Western nations to begin a national dialogue among its disparate factions and to stabilize the country. 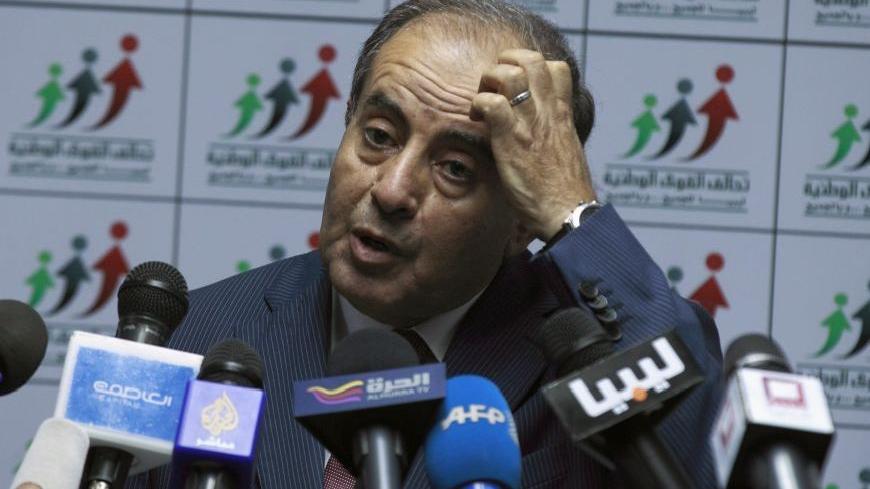 WASHINGTON — Former interim Prime Minister Mahmoud Jibril described Libya Thursday as a "stateless society" requiring assistance from the United States and other Western nations to begin a national dialogue among its disparate factions and to stabilize the country.

In an exclusive interview with Al-Monitor, Jibril acknowledged that the security situation in Libya remains fragile amid widespread militia violence and attacks such as the one that killed US Ambassador Chris Stevens and three other Americans in Benghazi last month. Jibril indicated that armed groups, including remnants of Moammar Gadhafi's regime, are able to stage attacks and smuggle weapons across Libya's borders almost at will.

"There is a lack of a controlling power on the ground," Jibril said. "I don't think it's fair to assign all that's happening to a certain group because it's a golden opportunity for everybody. It's a fragile environment and everybody wants to mold it toward his own direction."

There have been estimates that there are more than 200 militia groups across Libya and that about a dozen have significant military clout. Two organizations — the Supreme Security Committee and the Shield of Libya Brigades — consist of former militiamen. But their "mandate, reporting and command structure remain unclear," according to a recent report by the Atlantic Council, a Washington think tank. The report also said that Gadhafi supporters in exile may be supporting armed groups within the country.

Educated at the University of Pittsburgh with a master's degree in political science and a doctorate in strategic planning and decision-making, Jibril served as head of planning for Gadhafi from 2007 until he defected from the regime following the start of the uprising in February 2011. Jibril was instrumental in building foreign support for the Libyan opposition and in creating a transitional council. The council resigned last summer after Libya held its first national elections in more than 40 years and elected a 200-member interim legislature. Libya has yet to choose a committee to write a new constitution and it remains unclear whether such a committee will be elected or appointed.

Jibril did not reply when asked about a reported $2 billion investment by Qatar to support an Islamic government in Libya based on Shariah but said that Islamic law should provide a "frame of reference" for a constitution that has yet to be written.

"The issue of Islam and Shariah was never a controversial issue in Libya simply because we are, thank God, a homogenous society," Jibril said. "We are mostly Sunni and it's a Maliki [one of four schools of Islam] doctrine ... Unfortunately for political reasons, some factions started to inject this religious element into the political process which is a very risky thing. Religion was and still is our main element of unity in Libya. If we use this for political purposes, then we are dividing the country into believers and disbelievers."

While Jibril was categorical that "Shariah is our frame of reference and every law which contradicts Sharia should be rejected," he said the job of interpreting just what that means should be left to experts. "I am not a religious scholar. I would rather devote myself to the development of the country where I can make a modest contribution hopefully," he said.

The new government of Libya is not to blame, according to Jibril, for the presence or financing of Libyan jihadists outside the country, especially in Syria. Libyan extremists have been active in Syria and elsewhere in the region, he said, since "before the fall of the [Gadhafi] regime."

"Blaming Libya — when we talk about Libya we assume there is a state and a government and as I said, this is not fair," he said. "There are some groups who move and act freely today in Libya outside the control and the legitimacy of the government."

Jibril said he "can't speculate" about where money for the jihadists may be originating. He did note, however, "a statement from Mustafa Abdul Jalil [the former head of the Libyan Transitional National Council] that the TNC has committed itself to contribute 100 million Libyan dinars to the Syrians. Whether that pledge has been materialized, I have no idea."

Jibril said restoring stability and getting foreign companies — besides oil companies which have all returned — to resume their projects in Libya was a "chicken-and-egg situation" that must be resolved simultaneously if Libya is to recover from four decades of dictatorship and prosper.

"I hope the new government will force those [other] companies to come back. It's some kind of hypocrisy to accept oil companies doing business as usual while others use lack of security as an argument not to return to Libya," he said. "We have construction projects all over the place, all infrastructure projects — roads, bridges, power stations, airports. They are all paralyzed."

Jibril stressed the need for a US role in helping Libya's political transition. "Whatever role the West and the United States want to play would be in the direction of helping Libyans get involved in a national dialogue," he said. "There are different political factions - they don't talk to each other. They should sit around the table and find common ground for this transitional period. The moment we draft a constitution, then there is a frame of reference."

Barbara Slavin is Washington correspondent for Al-Monitor and a senior fellow at the Atlantic Council. On Twitter: @BarbaraSlavin1.