Khamenei Will Not Compromise

Meir Javedanfar recently argued in Al-Monitor that sanctions will force Iran to accede to Western demands on its nuclear program. Reza Sanati responds that instead of compromise, the Western negotiating tack is likely to exacerbate the conflict. 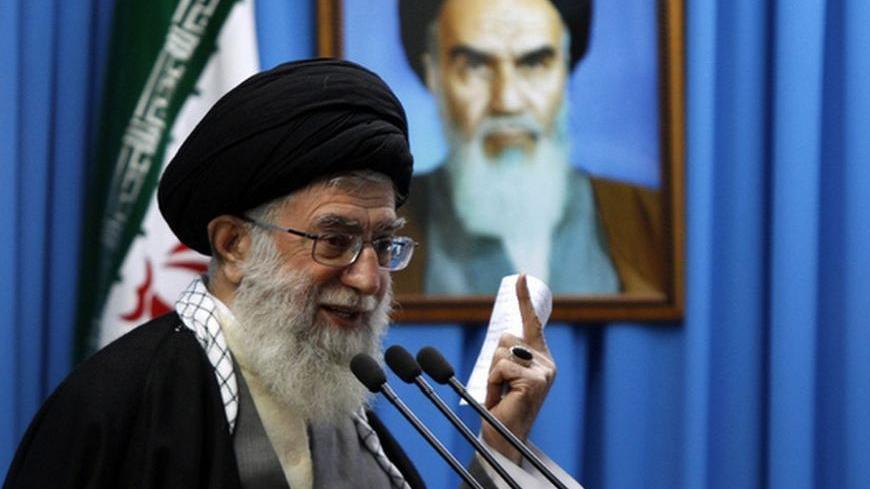 Meir Javedanfar recently argued in Al-Monitor that sanctions will force Iran to concede to Western demands on its nuclear program. His main argument is that the Western assault on Iran’s overall economy is so suffocating that rising domestic discontent will eventually lead to an Iranian “compromise” position in the space of “two to three years.”

Unfortunately, like so much of the conventional thinking among proponents of sanctions and “pressure,” his argument is built upon a series of fallacies that taken together, present an inaccurate picture of the troubled relationship between Iran and the West, and ultimately makes escalation toward conflict far more likely.

Here are four reasons why Khamenei will, in fact, not compromise.

The first is semantic, on the actual meaning of compromise. Javedanfar claims that sanctions will eventually force Iran to agree to the demands of the US and its allies on its nuclear program: close its fortified Fordow facility, ship out all of its 20%-enriched uranium abroad, answer all outstanding questions for the International Atomic Energy Agency, submit to a tougher inspection regime, and drop demands for Western recognition of its right to enrich uranium until “outstanding issues have been resolved.”

In the Iranian perspective, however, there is nothing compromising about this offer; it is a demand for total capitulation with nothing tangible in return, except a status-quo ante that still leaves Iran under heavy sanctions. Instead of compromise, the Western negotiating tack is likely to create a new chapter in the conflict as Iran, even if it did “compromise,” would feel compelled to renege.

The second element concerns the perception of the Iranian public. Javedanfar’s claim that Ayatollah Khamenei has “failed to convert his nuclear policies into a nationalistic consensus” contradicts the hard data, which was reconfirmed by the University of Maryland’s Ebrahim Mohseni. As reported by Geneive Abdo, Mohseni, in a poll conducted between Sept. 29 and Oct. 11 of 2012, found that 85% of Iranians strongly supported a civilian nuclear program, consistent with the International Peace Institute/Charney Research 2010 study, and 2009 studies by the RAND Corporation and World Public Opinion.

More specifically, as Abdo noted in the Mohseni study, when “respondents were asked: ‘Would you favor or oppose an agreement whereby all current sanctions against Iran would be removed and Iran would continue its nuclear-energy program, except that it would agree not to enrich uranium?’ 59% were opposed to stopping enrichment.” What these findings suggest is that Iranians, writ large, believe that their nuclear program is a strategic asset that they would not negotiate away.

The third miscalculation is about Iran’s economy. Undoubtedly, the escalation of the US-led sanctions regime has caused it considerable harm, impeding its ability to get paid for oil exports, access the global financial system and sustain the Iranian rial.

This economic pressure, however, will not likely lead to an economic collapse for three reasons: the nature of the Iranian economy, Iran’s projected hydrocarbon revenues and the coming end of the Mahmoud Ahmadinejad administration (and his policies). On the first issue, unlike many of its petro-state neighbors, Iran actually has a substantial non-oil economy with a large, diversified manufacturing base, one of Asia’s largest agro-business sectors and a burgeoning scientific community that rivals developed countries. Most Iranians, unlike their many neighbors, are not reliant upon oil rents for their livelihoods.

Secondly, while the sanctions have cut Iranian oil income, as Juan Cole has observed, 2012’s estimated oil income at $70 billion is still considerably higher than 2004’s figures of $37 billion, the year before Ahmadinejad came into office. The importance of efficient management becomes clear when recalling the previous Khatami and Rafsanjani presidencies, which had far less oil income but experienced far more economic success than the current administration.

And thirdly, many of the same policies that have exacerbated the sanctions' effects on Iran will end the day Ahmadinejad leaves office in 2013, as a new administration will be forced to bring in a more technocratic core to deal with what Ahmadinejad leaves behind. The cumulative effect of the sanctions escalation so far has been making the life of average Iranians financially harder and isolating them from the West.

The fourth and most consequential reason is Javedanfar’s unawareness of the complexities of US sanctions on Iran, particularly the difficulty in removing them in any quid-pro-quo negotiation. Many of the US banking sanctions, writes Andrew Parasiliti, “require repeal or amendment of the law and could not be undone by presidential certification," limiting presidential options and requiring congressional action for major sanctions relief.

It is worth noting, as Al-Monitor reported this week, that the US has loosened restrictions on medicine sales to Iran — an important gesture, but one unlikely to affect the Islamic Republic’s calculus on negotiations.

Likewise, the Comprehensive Iran Sanctions, Accountability and Divestment Act of 2010 imposes human rights demands on Iran that are unlikely to be heeded by the Islamic Republic and are not part of the domestic governance models in any regional country. While these goals are commendable, as Yousaf Butt has explained, these additional conditions have nothing to do with Iran’s nuclear program, probably leading the Iranian leadership to believe that US sanctions are actually intended to effect regime change, not to end Iran’s nuclear program.

Rather than a compromise, as Javendanfar predicts, if the current sanctions on Iran persist, a more likely outcome could instead be Iran withdrawing from the Nuclear Non-Proliferation Treaty and preparing for a conflict that is being imposed on it no matter what it does with its nuclear program.

The fundamental problem that divides the US from Iran is not whether the latter has a nuclear program. It is that Iran’s role in regional security and global affairs has been denied since the Iranian Revolution, creating a sense in Tehran of strategic vulnerability. It is this insecurity that drives much of the Islamic Republic’s foreign policy, begetting reciprocal US animosity and thus exacerbating the immense mutual mistrust of each other’s intentions. As long as this underlying problem is not addressed, a peaceful resolution to Iran’s nuclear program and other issues will remain elusive.

Reza Sanati is a research fellow at the Middle East Studies Center and a PhD candidate at the School of International and Public Affairs at Florida International University, on Twitter at @rzsanati