Why Khamenei Will Compromise

It's highly likely that Iran's supreme leader will have to declare a new set of compromises at the nuclear talks, partly due to Khamenei's failure to make his nuclear policies a nationalist issue, writes Meir Javedanfar. Fortunately, the same challenges that may force a nuclear compromise are also likely to deter a mad dash for the bomb. 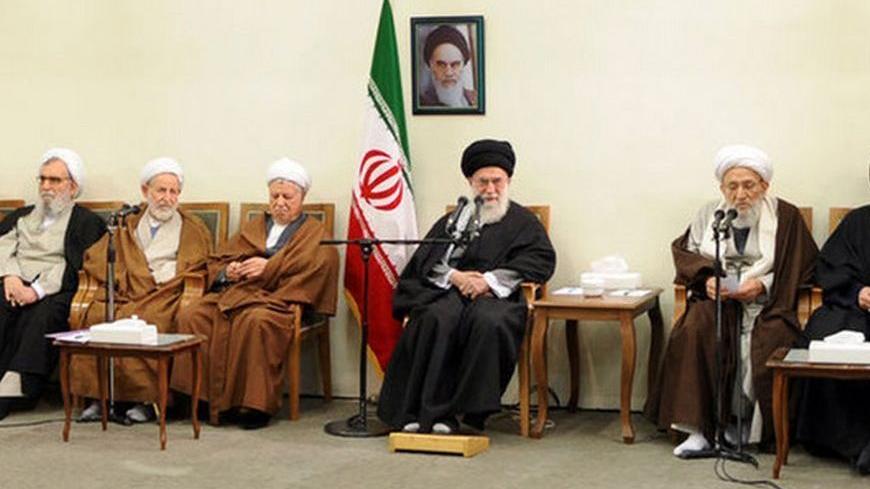 The Iranian regime is currently facing tough open-ended sanctions. Judging by the recent presidential foreign-policy debate, there is no end on the horizon as neither candidate would be willing to reduce sanctions unless Iran Supreme Leader Ali Khamenei backs down.

The economic challenges posed by the current sanctions are by far the biggest foreign-induced challenge that Khamenei has faced since assuming the role in 1989.

Should the current sanctions and isolation regime imposed by the West against Iran continue in their current format, in my opinion it is highly likely that Khamenei will be forced to make a new set of compromises at the nuclear talks. This could happen within two to  three years, at most. Compromises are likely to include the following:

The Iranian regime is likely to offer these compromises as part of a step-by-step program. After each step is taken, part of the current sanctions against Iran would be lifted and nuclear fuel would be supplied, at stages agreed on by both parties.

Khamenei is also very likely to insist that ultimately Iran be allowed to enrich at lower levels on its soil. It is likely that the Israeli government would accept such a proposal, as its biggest concern is enrichment at Fordow and Iran's current unwillingness to answer IAEA questions. A clean bill of health for Iran's nuclear program from the IAEA, as well as a subsequent tough inspection regime by it, would alleviate many of Israel's major concerns.

These compromises would be in contrast to Khamenei’s current proposal to the P5+1, which does not show any willingness on Iran's part to compromise on its enrichment facility at Fordow or to answer questions about its previous activities to the IAEA. Although president Ahmadinejad has in the past offered to stop enrichment at 20% if nuclear fuel is supplied to Iran, this offer was not pursued as he has no authority over Iran's nuclear program.

Khamenei would need to offer new compromises in order to secure his regime's survival. By allowing the sanctions to continue, Khamenei could ultimately face the economic collapse of his regime. This is a price which Iran’s most powerful man would be unwilling to pay. Nothing is worth more to him than the stability of his government.

There are numerous reasons behind the Iranian regime’s inability to get through the current challenges without having to offer a new set of compromises. The supreme leader's style of leadership and its consequences are one of them.

Khamenei is no Mohammad Mossadegh. In other words, he has failed to convert his nuclear policies into a nationalistic consensus issue as Mossadegh was able to do with his oil-nationalization policies. This is due to numerous reasons. Khamenei does not have the charisma and, more importantly, the nationalist credentials of the former prime minister, who was overthrown by the CIA and MI6 in 1953. Also, Mossadegh was elected democratically, whereas Khamenei was not. Mossadegh had the backing of the majority of the Iranian people, whereas I believe that Khamenei only has the support of a minority.

When Mossadegh resigned in 1952 and was replaced by Ahmad Qavam, protests erupted after he announced his intention to reverse Mossadegh's stance and to negotiate with the British in order to end the oil dispute. However, if Khamenei announces that he is willing to show compromise at the nuclear talks, instead of protesting, many inside Iran are likely to celebrate.

Evidence of Khamenei’s failure to make the nuclear issue into a nationalistic one are not difficult to find. These include his refusal to hold a referendum on the issue, something which opposition leader Mir-Hossein Mousavi has called for. Even online questions on this issue are prevented after a recent poll on the the Islamic Republic of Iran News Network's (IRINN) website showed 63% of respondents want the regime to compromise at the nuclear talks. That poll was soon removed and nothing similar has appeared since.

Khamenei is no Ruhollah Khomeini either. He does not have the credentials of Iran’s charismatic leader of the 1979 revolution. Khomeini managed to unite the regime behind him for eight years to fight Saddam Hussein. This is in addition to being able to get through numerous domestic challenges. Khamenei has failed to create such unity. His falling out with every single president who has served under him including Mahmoud Ahmadinejad is testimony of the divisive nature of his leadership. This is in addition to the 2009 post-election uprising in Iran, something which never happened under Khomeini as he was more successful in uniting the different regime factions. This is one of the reasons why the regime has failed to create the same atmosphere which Khomeini did during Iran's war against Saddam's army.

This failure has meant that Khamenei has needed to buy the loyalty of those around him, especially Iran's Revolutionary Guard Corps (IRGC), far more than Khomeini had to do. Lack of oil income could reduce the IRGC’s loyalty. It could also create more infighting between the different factions, conflicts that until recently had been contained by regime funds. Such important factors are likely to be crucial in Khamenei’s likely decision to make new nuclear compromises.

There are other reasons which make it improbable for the regime to get through the current open-ended sanctions. These include massive economic mismanagement by Ahmadinejad that has ravaged Iran’s economy for the last eight years, adding to the negative impact of sanctions. It also seems that the regime was caught off guard as it did not believe that US President Barack Obama would be able to impose such extensive sanctions. This has meant that it is economically unprepared to meet the challenge of the current sanctions in the long term.

The same challenges that are likely to force Khamenei to make nuclear compromises are also likely to deter him from making a mad dash for the bomb. His regime is too divided, too economically weak and most probably, too concerned about the concerns of the military attack this could invite. Israel’s prime minister may not have heard Obama’s red line, but Iran’s supreme leader is likely to have heard Obama's declaration that when it comes to a nuclear Iran, containment is “no option” loud and clear.