For Palestinian Kids in Hebron, Little Joy on Back-to-School Day

Catching up with friends, showing off new clothes and getting new books — for most kids, the first day of school is exciting. But for Palestinian children who live in or go to school in the Old City of Hebron, the day is nothing to look forward to. Lena Odgaard reports for Al-Monitor. 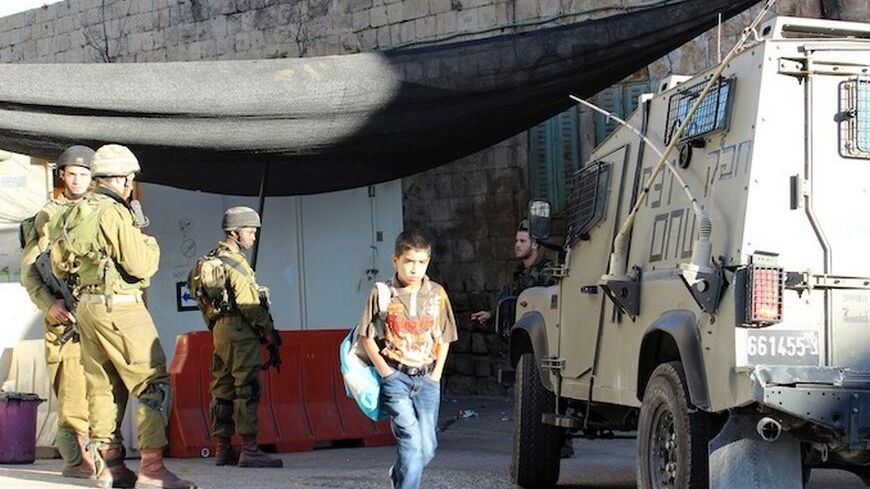 A boy walks past a checkpoint en route to his first day of school. - AL-MONITOR/Lena Odgaard
September 9, 2012

HEBRON — Catching up with friends, showing off new clothes and getting new books — for most kids, the first day of school is exciting. But for Palestinian children who live in or go to school in the Old City of Hebron, the day is nothing to look forward to. Here, crossing checkpoints manned by heavily armed Israeli soldiers and dodging barbs and attacks from Israeli settlers are unfortunate parts of an ordinary school day.

On Sunday morning (Sept. 2) little girls sporting new dresses, shiny shoes and braided hair, boys in blue shirts, and teenage girls in blue and white school uniforms flocked to the otherwise usually quiet and empty Shuhada street in H2. Israel’s military closed all the shops and sealed off the Old City’s main artery to Palestinian traffic after the 2000 Intifada to avoid recurring clashes between Palestinians and Jewish settlers — between 600 and 800 live in the midst of 35,000 Palestinians. Only settler vehicles can use that street.

At one of the many checkpoints controlling passage from the Palestinian-managed side of Hebron, known as H1 to H2, eight soldiers watched as children, parents and teachers crossed through the beeping metal detector. An 8-year-old girl walked nervously through from H1 and started running as soon as she passed the armored vehicle parked next the checkpoint. A boy, 6, clung to his father’s hand and kept looking over his shoulder toward the soldiers. A group of 6- to-12-year-old girls, who reside in H2, ran down the hill toward the checkpoint while making sure to keep as much distance from the soldiers as possible. The children were heading for the Cordoba school, which is the only school still open for Palestinian children in the H2 area.

Monitoring potential rights violations in the highly volatile part of the city were Chris Cox and Eero Mäntymaa, volunteers with the international organization EAPPI. Cox remarked on the soldiers checking the backpacks of even very young children, even though the school has asked them not to because it frightens the pupils. Many residents in H2, including children, are used to crossing checkpoints, but some still react very strongly. Said Mäntymaa: "Children react how they react, often by crying, and they remind you that it is not normal to have a gun pointed to your face."

But the children of H2 often face much worse treatment from soldiers. Recent published testimonies of former Israeli soldiers by Breaking the Silence reveal a practice of beatings, intimidation and humiliation of Palestinian children and youth. Accounts by soldiers include conducting random arrests, leaving boys aged 12-to-14 blindfolded and handcuffed for hours, and witnessing how kids cry, scream or wet their pants.

Besides the cruel treatment dealt by some soldiers, the Palestinian children in H2 also face harassment and attacks by settlers. In a report by the UN's Richard Falk, concern is expressed for the recent surge in settler violence especially in areas such as Hebron. The report talks of “constant high tensions between Israeli settlers and the indigenous population, including young schoolchildren who are often threatened or even assaulted by Israeli settlers on their way to school.”

Numbers from a UNICEF-led working group on violations against children indicate a significant rise in the amount of Palestinian children injured as a consequence of settler violence in the West Bank: from 29 in 2010 to 41 in 2011 and 21 during the first half of 2012. In 2011 in Hebron alone, nine children were injured and one was killed. In 2012 seven boys aged 9 to 17 were injured in settler-related incidents. The numbers only include cases where children required medical treatment and therefore not minor incidents of attacks and harassment as those often witnessed by organizations monitoring rights on the ground.

When school becomes a target

In H2, the Palestinian Cordoba School lies on a hill across from the Jewish settlement of Beit Hadassah. The school’s courtyard is surrounded by a tall fence and outside the school, a camera records potential attacks on the school. In the past year, the UNICEF-led working group has registered incidents of Israeli settlers throwing rocks and bottles at the school, assaulting teachers and girls on their way home from school. In June, before the pupils were to take their final exam, settlers damaged and blocked the main door to the school and tagged the school’s wall with the words “Death to Arabs” written in Hebrew.

The school has about 150 students and is the only co-coed school in Hebron. Noura Nasser, the Cordoba school principal, said it used to be an all-girls school but as pupils were dropping out for fear of being harassed by soldiers or settlers, the school started accepting boys in first through sixth grades. Seventh through 10th remain only for girls as the older boys face more even more problems at the checkpoint and their families prefer they go to another school outside H2.

Lamya Tamimi, an English teacher at Cordoba School, told Al-Monitor that last school year was especially difficult partly due to checkpoint closures and vandalism by settlers. But she worries especially about the long-term trauma inflicted on the children by recurring incidents of violence. This, she said, is reflected in the students’ drawings, which often feature soldiers and guns, but also in their behavior: “Some children become more violent and hit the other children. Some are scared and cry. Others isolate themselves.”

The Abu Shamsieh family lives 10 minutes away from the school — still in H2. Al-Monitor met the mother, Fayza, 35, after she had sent her five kids off to school. But they no longer go to the Cordoba School. Three years ago, when her youngest daughter, Marwa, was in the first grade at Cordoba, a settler lit her hair on fire as she was walking home. A soldier saw it and stopped the fire, but for a year Marwa would wake up in the middle of the night screaming, her mother said. The incident also scared Marwa’s siblings so much so that they refused to go back to Cordoba. But switching schools has not made her children safer. Last week a settler boy hit her 11-year-old son, Mohammed, as he was playing in the street. Mohammed hit back and a soldier who saw the fight wanted to take the Palestinian boy to the settlement to be identified by the settler and go to court. Fayza intervened and managed to make such a scene that the soldier let Mohammed go.

Hisham Sharabati, with the Palestinian human rights organization Al-Haq in Hebron, said that there are almost daily incidents of settlers trying to block the way of Palestinian children, beating them, or grabbing their school bags. According to Sharabati, the perpetrators are usually young settlers, minors who cannot be arrested according to Israel’s civil law. “Sometimes parents even watch and cheer them on,” said Sharabati. “But if a Palestinian child pushes back, he will be detained and interrogated because he is under Israeli military law.”

Though Palestinians and Israeli settlers both live in Hebron’s H2, different legal systems apply to them. According to Sharabati Israelis are considered minors until the age of 18 while Palestinians are considered criminally responsible and can be tried at a military court at age 12. In a recent report, a delegation of British lawyers criticized the discrimination in the treatment of Israeli and Palestinian juveniles including allowing for Palestinian minors to be detained for up to 90 days without access to a lawyer compared to 48 hours for Israeli minors. Additionally, accounts from international monitoring organizations as well as testimonies from Breaking the Silence indicate impunity for settlers, which only serves to encourage an increase in acts of settler violence. Numbers from Defense for Children International show that 90 percent of cases against Palestinian children end with a custodial sentence while this goes for 6.5 percent of Israeli juveniles.

According to Sharabati, soldiers and settlers, especially, target teenage boys. Some families therefore choose to move out of H2 when their boys become teenagers because they are continuously targeted and detained charged with, for example, violence against settlers or stone-throwing. Whether there are official charges or not, the families have to pay a fine and if this happens on a regular basis, a financially struggling family will be ruined by such costs. Sharabati emphasized that most of the families in H2 are poor: “Those, who can afford it, leave — even those who can’t.” Since 2000, about 42% of the Palestinian houses in H2 have been abandoned.

Cox from EAPPI is very concerned with the situation for children in H2 — not just because of the continuous acts of violence the children are subjected to, but also the trauma of previous experiences and everyday encounters with armed soldiers.

“I believe that the situation is chronic rather than acute. There is a culture of high security and harassment which is the background reality for these kids,” said Cox, “Some kids get bullied every day, and sometimes even hospitalized. Maybe no one gets killed, but there is this constant level of harassment.”

by Murielle KASPRZAK and Joseph SCHMID | AFP | May 26, 2022
END_OF_DOCUMENT_TOKEN_TO_BE_REPLACED