Although Iran and Hamas emerged as victors from the Gaza conflict and Israel and the Gulf states were set back, recurring war will undermine stability for the entire region, writes Seyed Hossein Moussavian. 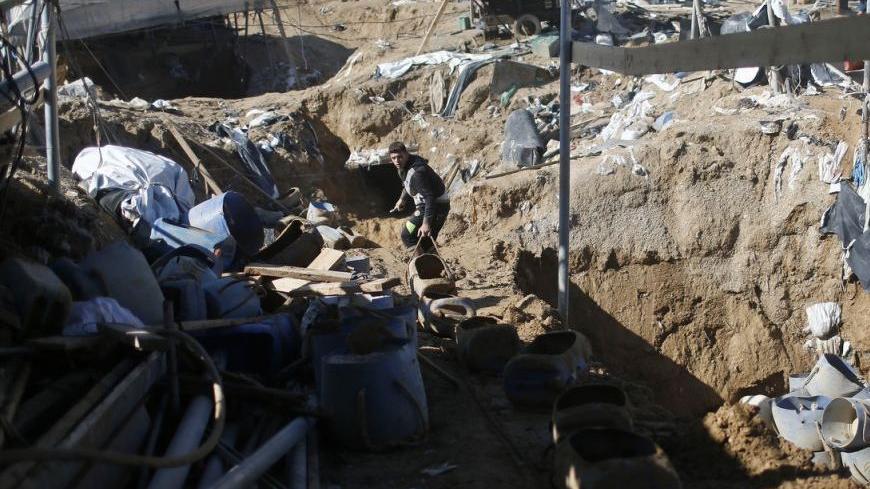 A Palestinian works at the entrance of a smuggling tunnel dug beneath the Egyptian-Gaza border in Rafah, in the southern Gaza Strip, Nov. 26, 2012. Knee-deep in craters carved out by Israeli air strikes, Palestinians wielded shovels and planks to reopen tunnels used to smuggle in goods from Egypt to Gaza, as international aid agencies raced to replenish Gaza's supplies. - REUTERS/Mohammed Salem

The eight-day conflict between Hamas and Israel has ended in a cease-fire. Although shorter than Operation Cast Lead in 2008-09, the latest Israeli Operation Pillar of Defense was nevertheless devastating. Israeli naval and air bombardments killed 165 and wounded 1,200 Palestinians, while damage to Gaza’s infrastructure amounted to $1.2 billion. The rockets fired from Gaza resulted in five Israeli deaths and scores wounded.

Israel did not achieve the goal it had publicly declared: the destruction of Hamas’s rocket capability. Hamas and other Palestinian militant organizations were able to continue rocket attacks into Israel, reaching further targets with neighborhoods in Tel Aviv and Jerusalem for the first time. The latest Israeli failure was replayed during the 33-day war with Hezbollah in 2006 and the 22-days war with Hamas in 2008-9 respectively.

While seemingly a repetition of past conflicts, the latest Israeli-Hamas duel occurred in a fundamentally different regional reality that will have have major repercussions for Israel and Arab leaders, while Iran stands to gain the most.

First, Iranian Speaker of Parliament Ali Larijani acknowledged: "We are proud to defend the people of Palestine and Hamas ... and that our assistance to them has been both financial and military." Since the 1979 Iranian revolution, Iran has earnestly provided political, ideological and financial support to the Palestinian resistance against Israeli occupation. This was the first time that Tehran confirmed it is providing military assistance to the Palestinians.

Second, Israel, despite its superior military and technological advantage as well as its modern Iron Dome system, was unable to intercept all the longer-range Fajr-5 rockets fired from Gaza that reached Tel Aviv and Jerusalem. The Fajr-5 does not constitute a major part of Iran’s missile arsenal and capability, yet it was the first time Palestinian groups used more sophisticated rockets against Israeli targets. Iran's Revolutionary Guards chief General Mohammad Ali Jafari confirmed the missile technology transfer to Gaza by stating that "we provided them with technology [to build Fajr-5 missiles] and their production was rapid." This is a major shift in building a more formidable military capability in Gaza making Israel vulnerable in the future. The ‘invisibility’ of Israel has been shattered in the aftermath of this latest conflict and has also emboldened other groups towards Israel—most notably the Lebanese militant group Hezbollah, with its leader Hassan Nasrallah stating that, "Israel, which was shaken by a handful of Fajr-5 rockets during eight days - how would it cope with thousands of rockets which would fall on Tel Aviv and other [cities]... if it attacked Lebanon?” adding: “The time when Israel could terrorize us has expired.”

Third, this was overtly a Hamas-Israel war, while covertly an Iran-Israel war. Iranian military strategists analyzed the capability of the Israelis during this latest skirmish in Gaza and have reached a conclusion that it impossible for Israel to successfully maintain a three-front war with Iran, Hezbollah and Hamas. Israeli military threat against Iran was also downplayed by the undersecretary of Iran’s Supreme National Security Council Ali Baqeri “When the Zionist regime [Israel can’t stand the resistance in the blockaded Gaza Strip, it is clear that it will definitely have nothing to say when it comes to the power and strength of the Islamic Republic.”

Fourth, the core determinant in a war is the capacity, strength and readiness of a nation to resist the consequences of a war. This latest conflict caused widespread public panic in Israel, with more than a million seeking safety in bomb shelters — contrasted to Palestinians who do not have shelters. Moreover,  it appears that the Israeli public’s readiness and support cannot be sustained in a prolonged conflict. For any military establishment, this factor is a major indicator of the public’s ability to stomach a war. During the Iran-Iraq war, Iran was able to defend itself because of the nation's human resources and their ability to steadfastly support the government — Israel does not possess the mass numbers or the required level of public support needed in a sustained conflict.

Fifth, the latest incursion exposed Israel’s social and military vulnerabilities, with far-reaching consequences, which also carries ramifications for Arab leaders in the region. The Syrian crisis revealed that the leaders of the Arab nations — especially Qatar and Saudi Arabia — are providing military and financial support to the Syrian opposition that seek to overthrow the Assad government. Coupled with conferences and coordinating efforts to bolster the opposition have exacerbated the internal conflict within a Muslim country. Yet, when it came to the latest Israeli aggression in Gaza or for that matter past incursions — Arab leaders have provided only rhetoric with no tangible actions. Ali Larijani voiced Iran’s discontent with Arab nations who are reluctant to help Palestinians beyond words, stating: “The Palestinian nation does not need speeches and meetings. Arab countries should send military aid.”

Arab leaders cannot continue this trend, first and foremost because of the Arab Spring that has brought down dictators closely aligned with Western interest and replaced them with popular governments who are answerable to the public. The sweeping changes in the region have brought about civil society pressures demanding a more stern posture towards Israel and an end to Palestinian suffering. Public opinion in the region is gravitated towards the view that Arab leaders are only giving lip service to a continuing trend of Israeli aggression against the Palestinians — this reality has discredited the credibility of the Arab leaders in the eyes of the Arab people. Netanyahu, by waging this latest conflict, has once again showcased the shortcomings of the Arab leaders to confront Israel — further tarnishing their rule. Ultimately, this showed that the Arab leaders are wolves toward Islamic nations and lambs toward Israel. Even Hamas has brought the question of Arab leadership and reaction under question with its leader Khaled Meshal thanking Iranians for their military and financial support and asked Arab leaders to follow suit.

Ultimately, the latest Israeli military expedition in Gaza has been a major setback for Israel, Arab leaders who have remained silent and the credibility of Palestinian Authority in the West Bank who are no longer seen by most Palestinians as their legitimate representative. On the other hand, Hamas has gained popularity among Palestinians and Muslims for not succumbing to yet another Israeli bombardment. Despite the fact the Palestinian resistance and Iran were the winners, ultimately such trends of reoccurring conflict and threats will be counterproductive to any sustained peace and stability in the whole region. Key players in the region should take a moment to breathe and rethink the current strategies that have not led to a sustained resolution. The current crisis and instability in Iraq, Afghanistan, Syria, Bahrain and fragile new popular governments in the region, coupled with the Palestinian-Israeli conflict can be a trigger to engulf the whole region into a prolonged war.