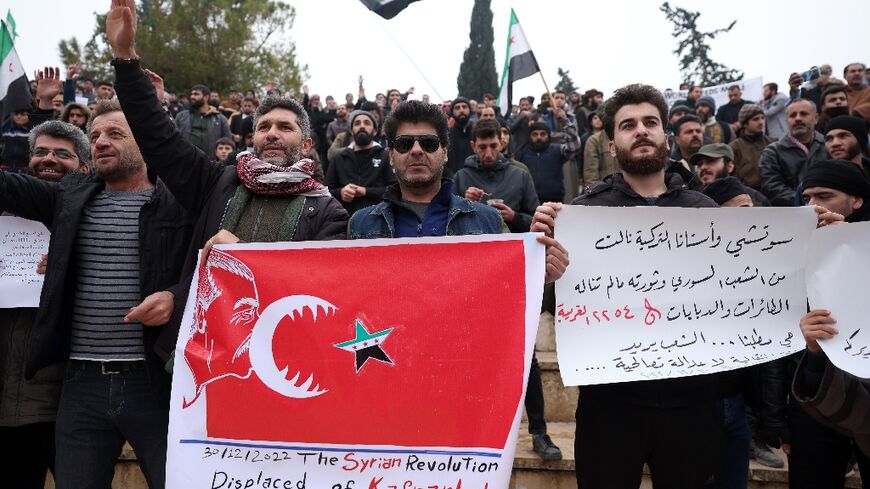 Turkey on Tuesday hosted the leaders of Syria's opposition in a bid to assuage their concern following its overtures to Damascus.

Foreign Minister Mevlut Cavusoglu tweeted images of his meeting in Ankara with the opposition Syrian National Council chief Mahmut al-Maslat and other leaders.

The talks came less than a week after the defence chiefs of Turkey and Syria held landmarks negotiations in Moscow -- the first such meeting since 2011.

"We reiterated our support to the Syrian opposition and people in accordance with UNSC Resolution 2254," Cavusoglu said in reference to a 2015 United Nations call for a ceasefire and political settlement in Syria.

Ankara became a sworn enemy of Damascus when it began backing rebel efforts to topple President Bashar al-Assad at the start of the Syrian civil war 12 years ago.

But Turkish President Recep Tayyip Erdogan -- who called Assad a "terrorist" in 2017 -- has opened up to the idea of meeting the Syrian leader.

Erdogan has suggested that the talks between the defence chiefs be followed up by a meeting between the foreign ministers that could set up a potential presidential summit.

Cavusoglu said he expects to meet his Syrian counterpart Faisal Mekdad in Moscow in the second half of January.

Some analysts believe that Assad will not agree to meet Erdogan before Turkey holds a general election -- now scheduled for no later than June.

Erdogan's foreign policy adviser Ibrahim Kalin said it was "too early to say right now" when the two presidents might meet.

"How all of this unfolds depends on the regime's attitude," Kalin told NTV television.

"Turkey has extended its hand. We do not think that they will leave this hand hanging."

Erdogan's hopes for talks with Assad follow calls from Turkey's main opposition party for Ankara to pull back its troops from Syria and make peace with Damascus.

The opposition is pressing Erdogan to speed up the "voluntary" return of nearly four million Syrians who fled the fighting to Turkey.

Anti-refugee sentiments are running high in Turkey ahead of the election and Erdogan has hardened his once-accepting stance towards people displaced by war.

Kalin confirmed that Ankara was now pressing Damascus "to take steps for the return of refugees and the humane treatment of displaced Syrians".

The mooted reconciliation has alarmed Syrian opposition leaders and supporters who reside mostly in parts of the war-torn country under Ankara's indirect control.

The United States, Turkey's NATO ally, made clear its opposition to improving relations with Assad, who last year travelled to the United Arab Emirates in his first trip since the war to another Arab country.

"We do not support countries upgrading their relations or expressing support to rehabilitate the brutal dictator Bashar al-Assad," State Department spokesman Ned Price told reporters when asked about the Moscow meeting.

"We urge states to carefully consider the Assad regime's atrocious human rights record of the past 12 years as it continues to inflict atrocities on the Syrian people and to deny access to life-saving humanitarian aid," Price said.