Saudi Arabia's announcement of conditional foreign aid is being seen as a move by the kingdom to stand up to global pressures and conduct itself with more autonomy. 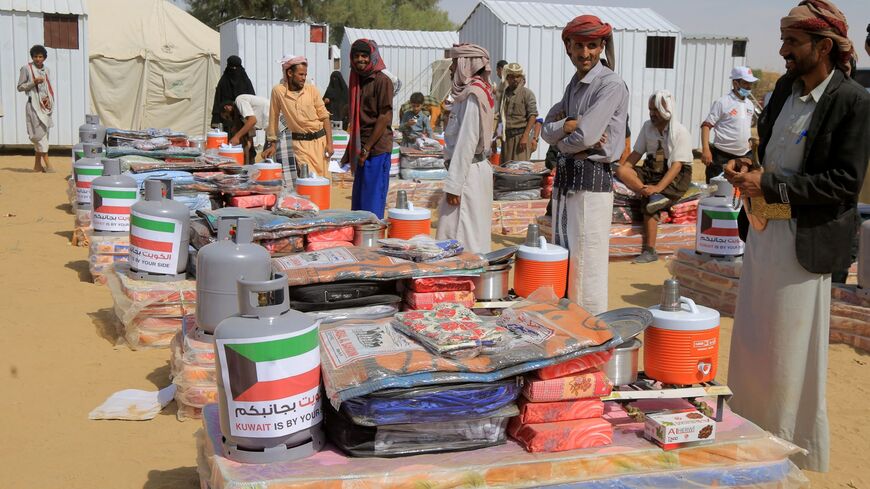 Displaced Yemenis receive aid donated by a Kuwaiti charitable organization on the outskirts of the northeastern city of Ma'rib, on Jan. 1, 2022, in the last stronghold of the Saudi-backed Yemeni government in the north. - STR/AFP via Getty Images

Saudi Arabia’s declaration this week that its financial aid offerings will be conditional moving forward can be seen as part of the country’s move to put “Saudi first” in spending and other global matters.

The kingdom’s Finance Minister Mohammed Al-Jadaan made the pivotal announcement on Wednesday during a panel discussion at the World Economic Forum in Davos, Switzerland.

“We used to give direct grants and deposits without strings attached, and we are changing that,” said Al-Jadaan. “We are working with multilateral institutions to actually say we need to see reforms.”

Saudi Arabia seems to be re-calibrating how its constituents perceive it on the global stage, as the nation’s global economic ambitions demand domestic transformation and require heavy investments from its population.

Kristin Smith Diwan, a senior resident scholar at The Arab Gulf States Institute in Washington, saw this as a response to the public sentiment.

“Saudi people see their resources going abroad, while they’re being asked to pay taxes, have their benefits cut, and so on. So I think this Saudi first stance really serves as a way to both court and contain populism.”

Yet the pressure for the oil-rich country to maintain its role as a regional supporter is mounting amid a global economic downturn, pressured by the Ukraine-Russia war.

Over the years, the kingdom has been one of the largest single aid providers to Egypt, whose currency has been cut in half since March of 2022. January of this year marked the lowest recorded exchange rate for the Lebanese pound to the dollar, and cash-strapped Pakistan sought aid from the kingdom as well.

“There's probably a lot of pressure for them to step up and to contribute to some of these countries that they're worried about, like Egypt and Jordan,” said Diwan, who believes Saudi Arabia will be more skeptical about getting involved, moving forward.

At the gathering of regional leaders in Abu Dhabi attended by Egypt’s President Abdel Fattah al-Sisi and others this week, the Saudis' absence was conspicuous, she told Al-Monitor.

From 2007 to 2017, Saudi Arabia gave $32.65 billion in aid to 78 countries, according to the UN Office for the Coordination of Humanitarian Affairs.

Yemen was the top recipient with $13 billion during that period. The country’s civil war started in 2014, and Saudi Arabia’s coalition intervened a year later.

More recently in 2021, Saudi Arabia’s Official Development Assistance led the world at more than 1% of its national income, according to the Organization for Economic Cooperation and Development, and exceeding the 0.7% recommended by the UN.

Yet in 2022, Saudi Arabia along with Qatar, the United Arab Emirates and other Gulf states, moved from bestowing financial aid to pursuing investments that might yield returns for both the investor and recipient.

Earlier this month, the kingdom said it would increase its investments in Pakistan to $10 billion, and before that put in $30 billion into building power plants and supporting the central bank, in addition to setting up companies in Jordan, Bahrain, Sudan, Iraq, and Oman with investments up to $24 billion according to Reuters.

This conditionality opens the door for more coordination with international institutions such as the World Bank and IMF, but it’s also a tradeoff.

“I think Saudi Arabia is very conscious of the way they can use their economic leverage as a political tool to enforce their interests,” Diwan told Al-Monitor, and she doesn’t expect them to give that up completely by working with global entities.

Saudi Arabia will want to maintain its role as champion of the Global South, she said, citing the kingdom’s standoff with the US last October, when it decided to cut oil production, resulting in higher oil prices and a vow for consequences from the US.