A European delegation is conducting an investigation into Lebanon’s banking system and the port explosion in the hope of providing some answers. 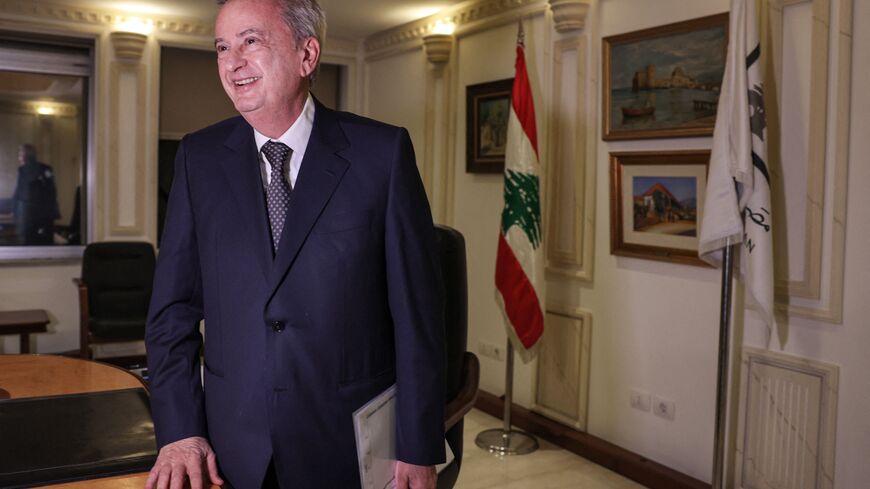 A judicial European delegation from France, Germany and Luxembourg is visiting Lebanon and conducting an investigation into the country's central bank and its Gov. Riad Salameh.

While part of the delegation has already arrived in Beirut, the European Observatory for the Integrity of Lebanon announced on Tuesday that French Judge Aude Buresi will make a second visit to the country on Monday, Annahar newspaper reported.

She will continue her investigation into Salameh, who is accused of alleged embezzlement and money laundering from Lebanon into European countries. The probe into Salameh was first initiated by Swiss authorities in 2021, Reuters reported. But at least six European countries are investigating Salameh now for allegedly embezzling hundreds of millions of dollars through Forry Associates, a company owned and run by his brother Raja Salameh.

Lebanese actress Stephanie Saliba is also being investigated for her ties to Salameh. The bank chief denies any wrongdoing.

The European visit coincides with the deteriorating economic situation in the country. Al-Monitor had reported that banks cannot give depositors most of their savings due to mismanagement of funds and informal capital controls with weekly and monthly quotas that differ from one bank to another. Due to repetitive safety concerns and armed depositors walking into banks requesting to withdraw from their accounts, today, depositors cannot enter their bank without an appointment amid tighter security.

On Tuesday, a depositor, who is also a member of the Lebanese army, fired gunshots at BLOM Bank’s closed doors in Sidon. He was arrested. The Lebanese Depositors Association tweeted the picture of another armed man inside the Banque Libano-Francaise in Nabatieh. No further details were provided. This is not the first time that such incidents have occurred.

What happened: The Lebanese population has been suffering as a result of the economic collapse. The country is witnessing an increasing hike in the prices of all goods, basic necessities, and oil and gas on an almost daily basis. The local currency has been radically devaluated and $1 is equivalent to 46,500 Lebanese pounds. It was pegged at 1,500 pounds to the dollar just three years ago.

The local judiciary has been investigating several key figures, with public calls for accountability, the return of funds and much-needed reforms that will entail an International Monetary Fund deal — so far leading to no results. European states have also been partaking in unveiling financial misconduct performed by Lebanese nationals on their soil.

The delegation including public prosecutors and financial specialists from France, Germany and Luxembourg will carry out their consultations until Friday, at the hall of the Court of Cassation at the Justice Palace in Beirut.

According to various media reports, the delegation is set to meet with 15 bankers and look into cases of financial misconduct revolving around accusations against Lebanon’s Central Bank Gov. Riad Salameh, although he won’t be questioned in the current round of inquiries.

Based on the information provided to the Lebanese Broadcasting Channel LBCI, the French judge, part of the delegation, has requested to meet Judge Tariq al-Bitar, in charge of the Beirut port explosion investigation. The latter has been suspended with different politicians trying to meddle and stall Bitar from performing his duties.

Why it matters: The Lebanese judicial system has been hindered from performing its duties and efficiently reaching a verdict. The politicization of every issue has become such a natural progression of affairs that moving forward seems impossible at this point.

The delegation did not coordinate its task or get the authorization to conduct the investigation from the Lebanese authorities. Furthermore, it seems that no request for assistance or cooperation was made by the three European countries, which just provided a list of names to be questioned.

According to media reports, Judge Ghassan Oweidat, Lebanon’s public prosecutor, met with the delegation last week, expressing the Lebanese judiciary’s disapproval of how things are being handled.

A judicial source who spoke to Arab News on condition of anonymity said that such a move brings into question Lebanese sovereignty and the relevance of the Lebanese state. Conducting an investigation on Lebanese soil would require a protocol and clearance.

“The foreign judicial delegation doesn’t have the right to arrive in Lebanon and conduct investigations without a letter of request. … The Convention against Corruption signed by Lebanon requires it to meet the demands of foreign judicial authorities, provided that they comply with the Lebanese laws,” the source said.

After more deliberation, it was agreed that the investigation would rely on the presence and cooperation of Lebanese judges who will participate in the sessions.

Know more: European countries have been investigating cases of corruption following the Lebanese economic meltdown. According to an AP report, Germany seized assets worth $38.4 million; French authorities seized assets worth at least $20 million including bank accounts worth $50.5 million in Monaco and a building in Brussels worth $7.7 million; and Luxembourg froze around $12 million from several bank accounts. Eurojust said that they targeted five suspects, without naming them.

Since October 2019, Lebanon has been grappling with an unparalleled economic crisis. Although Lebanese and European investigations and blame have been made public, it is clear that the root of the problem goes back to decades of corruption and mismanagement of public funds by a network of key figures. So far, there seems to be no political will by the country’s leadership to find a solution.