Supreme Leader Ayatollah Ali Khamenei said that women in loose hijabs are 'our daughters' and urged that they not be ostracized. 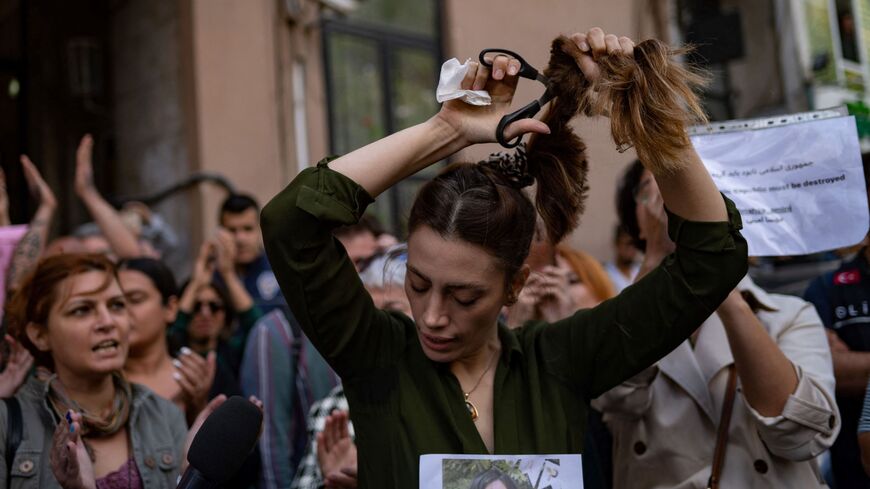 Nasibe Samsaei, an Iranian woman living in Turkey, cuts her ponytail off during a protest outside the Iranian consulate in Istanbul on Sept. 21, 2022, following the death of an Iranian woman after her arrest by the country's morality police in Tehran. - YASIN AKGUL/AFP via Getty Images
Arash Karami
@@thekarami
January 5, 2023

After nearly four months of protests in the country that were sparked over hijab laws, Iran’s Supreme Leader Ayatollah Ali Khamenei expressed a conciliatory message for the first time Wednesday.

Speaking to pro-government women’s activists Wednesday morning, Khamenei said, “The hijab is a religious and inviolable necessity, but this inviolable necessity should not mean that someone with not a full hijab should be accused of anti-religion or anti-revolutionary.”

He asked why accusations are made against women with what is commonly referred to as “bad hijab,” meaning that the front of their hair is showing. Khamenei added that women with this type of hijab were participating in government, run ceremonies and events, and that “they are like our own [wives] and daughters.”

Khamenei also coined a term, which will likely fall into popular use soon within Iranian media, describing scarves that do not fully cover the hair as “weak hijab.” He said, “A weak hijab is not a good thing, but it should not cause that individual to be seen outside of religion and the revolution, and all of us have faults that we should resolve.”

One Sept. 16, Mahsa Amini was arrested by the country’s morality police for wearing a loose-fitting hijab. She later died while in police custody. Her death sparked immediate protests with calls for the end of the Islamic Republic. Since then, over 500 people have been killed and over 12,000 have been arrested. Two individuals have been executed for charges of attacking security personnel, and approximately a dozen more have already been sentenced or are awaiting sentencing for charges that carry the death penalty.

In previous speeches, Khamenei has accused the protestors of being agents of foreign governments, particularly the United States.