Khamenei breaks silence on Iran protests, lays blame on US

In his first speech since the outbreak of protests Sept. 16, Iran's Supreme Leader Ayatollah Ali Khamenei accused the United States and Israel of promoting unrest in the country. 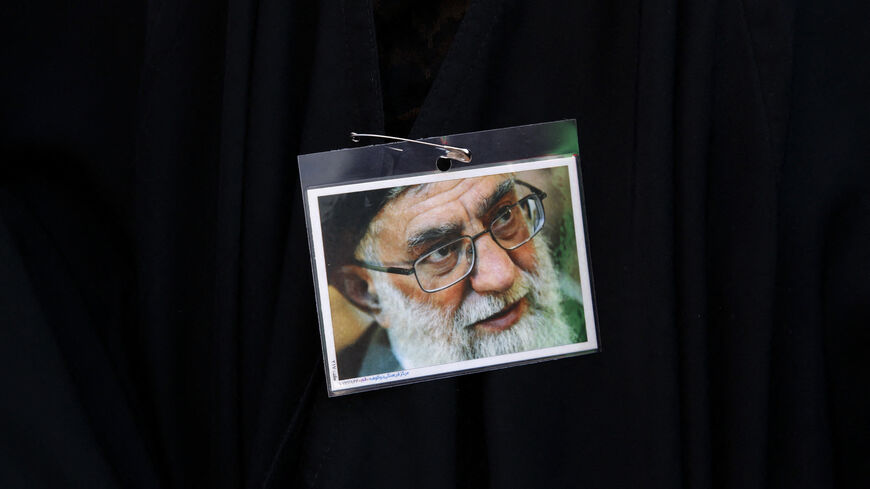 An Iranian pro-government demonstrator wears a pin displaying a portrait of Supreme Leader Ayatollah Ali Khamenei during a rally against the recent anti-government protests in Iran, in Tehran, on Sept. 25, 2022. - AFP via Getty Images

For the first time since protests swept the country nearly two weeks ago, Iran’s Supreme Leader Ayatollah Ali Khamenei has addressed the topic.

Speaking Monday at an police graduation ceremony and addressing Iran's top military brass, Khamenei called the death of Mahsa Amini, who died in police custody after being apprehended by the country's morality police, “heartbreaking.”

Yet Khamenei condemned the reactions to her death, saying that streets “were made unsafe, Qurans were burned, women were forcibly unveiled, mosques, hosseiniehs and cars were burned.” He said that such reactions were “not normal,” especially since the investigation into her death has not yet been concluded.

Khamenei referred to the demonstrations as “riots” and said, “I plainly state that these protests and unrest are designed by the United States and the fake tyrannical Zionist regime and their mercenaries and those traitor Iranians outside of the country who help them.” He claimed that if Amini had not died, the United States and Israel would have found other excuses to create unrest in Iran.

Khamenei complained of double standards in the solidarity with Iranian protesters expressed around the world. He said that there are “riots” in Paris every so often and US leaders never express support for them and Western media outlets never give them such heavy coverage. Khamenei also criticized Saudi Arabia for funding media outlets that promote protests and unrest in the country.

He said that Washington is not just opposed to the Islamic Republic of Iran, but would prefer an Iran like the previous government under Mohammad Reza Pahlavi, “who would follow orders.”

According to Khamenei, these protests are not ultimately about whether women must wear hijab. He said that some women who do not observe strict hijab are supporters of the Islamic Republic. He said that the main issue is the independence, perseverance and strength of Islamic Iran. Some analysts have interpreted his comments to suggest the government will stop enforcing the strict hijab laws that led to Amini’s detention and death.

On the protests themselves, Khamenei said that some protesters belong to the Mujahedin-e Khalq Organization, monarchists, separatists and family members of the old regime. He encouraged the judiciary to identify and prosecute them.

Khamenei also criticized those within the government and other influential figures for their statements immediately after Amini’s death. Khamenei said that these individuals were quick to condemn the government over Amini’s death but now that more facts have come to light, they must issue corrections. This statement was likely aimed at moderate figures such as former presidents Hassan Rouhani and Mohammad Khatami as well as their former cabinet members, who Khamenei frequently accuses of not showing unity.