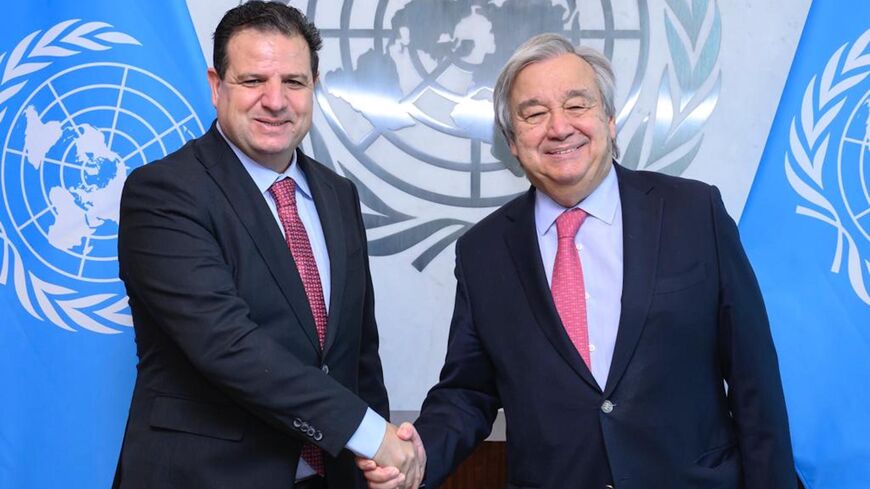 Chairman of Hadash-Ta'al Ayman Odeh met Dec. 9 with United Nations Secretary-General Antonio Guterres in New York. Apparently, the meeting was not coordinated with Israel’s Ambassador to the UN Gilad Erdan nor with the Foreign Ministry in Jerusalem, as customary with visits abroad of Knesset members. According to Israeli press, the meeting was coordinated with the Palestinian Authority, and with the approval of Palestinian President Mahmoud Abbas.

At the meeting, Odeh handed over to Guterres a letter calling for his support in the battle against what he described as discriminating policies of successive Israeli governments vis-a-vis its Arab citizens. Odeh presented data on the number of murders in the Arab community and related that 104 Arab citizens have been murdered so far in 2022. He argued that Israeli authorities are not acting sufficiently to curb crime and violence in the Arab community, failing to provide Arab citizens with the basic right of personal safety.

Odeh also expressed fears about the future Cabinet of Prime Minister-designate Benjamin Netanyahu, stating that the “incoming Israeli government will include [soon-to-be National Security Minister] Itamar Ben-Gvir, an adherent of Kahanism, a racist, Jewish supremacist political movement that has been designated a global terrorist by many international organizations including the US State Department.”

Following the meeting, Odeh declared in a video, “I just left an important meeting with the UN secretary-general. We have had enough of false promises. Gilad Erdan, Israel’s ambassador to the UN, is not our address. He was the minister of the police and was the most racist minister.  He does not represent us; we represent ourselves. This is another place for influence at the United Nations.”

Before meeting with Guterres, Odeh participated in the annual J-Street conference in Washington. Referring to the future Netanyahu government, Odeh said, “It is difficult to overstate just how dangerous this moment is. Netanyahu’s vision is war and occupation forever. This vision includes the families killed by Israeli missile strikes paid for by American taxpayer dollars and the dispossession of Arab Palestinian families in Bedouin communities. When politicians including [the] Biden administration provide a blank check to the Israeli military they materially support this vision.”

Odeh's trip to the United States followed a call last month by Chairman of the Arab Balad party Sami Abu Shehadeh for turning "the attention of the international community to the plight of Israel’s Arab citizens.”

Shehadeh frequently tweets in English against Israeli authorities, often addressing the international community. For instance, reacting this morning to the death of Palestinian girl Jana Zakarneh, 16, Shehadeh tweeted, "Impunity works under Lapid or Netanyahu. But there are international institutions to deal with such crimes. Why isn’t the International Criminal Court doing anything? Will the European Union mission in Israel issue any statement?”

Odeh’s office denied that his recent trip to the United States was part of any newly organized campaign to mobilize Washington against Netanyahu. One of his associates told Al-Monitor on condition of anonymity, “At the J-Street conference we wished to address the international Jewish community and to present Odeh’s vision of building a common Arab-Jewish camp that would work to advance peace and social justice. The meeting with the UN secretary-general aimed to raise the problem of violence suffered by the Arab community, and to ask the secretary-general to personally intervene in this issue.”