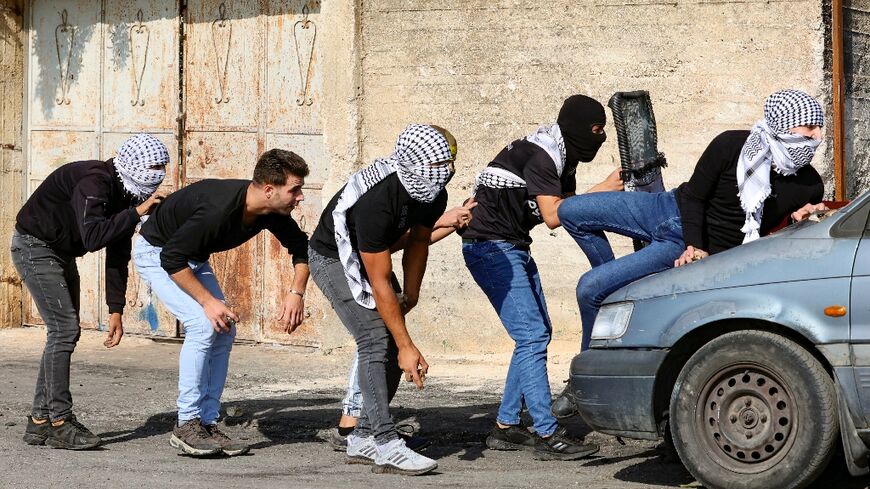 Palestinian demonstrators take cover during clashes with Israeli soldiers following a protest against the expropriation of Palestinian land by Israel in the village of Kfar Qaddum in the occupied West Bank, near the Jewish settlement of Kedumim - Zain Jaafar
Agence France-Presse
December 9, 2022 — Washington (AFP)

The United States said Friday it was pressing the United Nations not to update a blacklist of companies doing business in Israeli settlements, despite Washington's calls on its ally to stop expansion in occupied Palestinian territory.

The State Department confirmed that it had approached the UN human rights office with concerns about the list, whose first publication in 2020 infuriated Israel.

The United States "continues to oppose any work to update it" and has raised concerns "directly with the Office of the High Commissioner" for rights, State Department spokesman Vedant Patel told reporters.

"Our view is that this database only serves to reinforce an anti-Israel bias that too often finds traction in UN venues," he said.

"Also, this database poses a genuine threat to companies doing business or considering business operations in the region."

The initial publication -- which listed US companies including Airbnb, Expedia and TripAdvisor -- was denounced by the then administration of Donald Trump, which had reversed longstanding US opposition to settlements in the West Bank.

Secretary of State Antony Blinken in a speech Sunday warned the incoming right-wing government of Benjamin Netanyahu that the United States would oppose settlement expansion as well as any bid to annex the West Bank.

Axios, quoting Israeli sources, said that the new UN rights chief, Volker Turk, faced an upcoming choice on whether to update the list and may do quietly without announcing it.

The UN report comes in response to a 2016 UN Human Rights Council resolution calling for a "database for all businesses engaged in specific activities related to Israeli settlements in the occupied Palestinian territory."

After the list's publication, Airbnb said it would stop advertising in settlements but it backtracked after a backlash in the United States and Israel.