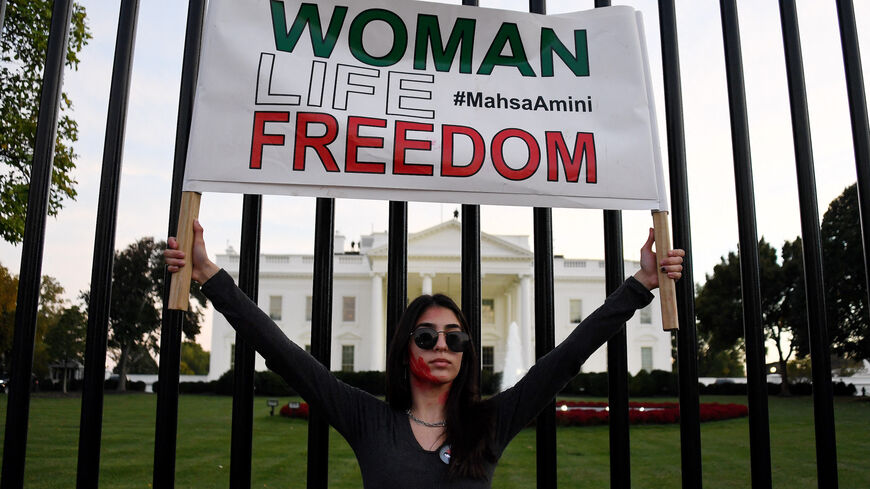 A woman holds a placard as protesters march in solidarity with protesters in Iran in front of the White House in Washington, DC, on Oct. 22, 2022. - OLIVIER DOULIERY/AFP via Getty Images

The Biden administration on Friday unveiled fresh sanctions targeting three Iranian officials involved in the repression of the country’s nationwide protests and other human rights abuses.

Among those targeted by the US Treasury Department was Ali Akbar Javidan, the Law Enforcement Forces (LEF) commander in Iran’s western Kermanshah province who the department described as having direct oversight of forces that have killed protesters, including children and the elderly.

“Javidan has made public statements justifying the police response to the ongoing protests while valorizing the LEF forces for suppressing them,” the department said in a statement.

During a roundup of 1,700 people in July, he allegedly vowed to punish so-called moral crimes, including for the improper wearing of the hijab.

Also hit with sanctions on Friday was Ebrahim Kouchakzaei, an LEF commander in the southeastern Iranian province of Sistan-Baluchestan whose alleged rape of a 15-year-old girl in mid-September fueled major protests in the province. The US Treasury said those protests were met with a violent security crackdown that killed more than 60 people.

In addition, the US government designated Karam Azizi, the warden of Iran’s notorious Rejaee Shahr Prison, which is known to house political prisoners.

"Under Azizi’s leadership, Rejaee Shahr Prison has remained a place rife with abuse, where prisoners suffer from physical abuse and medical neglect,” the Treasury said.

The sanctions on Azizi and Javidan were levied under the Global Magnitsky Act, which allows for visa bans and asset freezes on foreign officials implicated in rights abuses.

The latest measures come as Tehran violently cracks down on one of its largest protest movements since the 1979 revolution. Since the demonstrations erupted over the Sept. 16 death in police custody of 22-year-old Iranian Kurdish woman Masha Amini, the Treasury Department has issued five rounds of sanctions targeting Iranian officials involved in the violence against protesters and internet censorship.

On Thursday, Iran carried out the first known execution of a prisoner arrested over the protests. According to the semi-official Tasnim news agency, Mohsen Shekari was hanged after a court found him guilty of injuring a member of the security forces with a machete.

Coinciding with International Anti-Corruption Day, Canada also issued sanctions on Friday against Iranians implicated in human rights abuses. In a joint statement, the US and Canadian governments pledged to find additional ways to impose costs on those responsible for the ongoing repression.

"While these are longstanding concerns, the Iranian authorities’ intensification of violence against the Iranian people following the death of Mahsa 'Zhina' Amini calls for consequential responses from all corners of the world,” the statement read.

As the protests have dimmed prospects for a revived Iranian nuclear agreement, the Biden administration has stepped up its targeting of illicit Iranian oil sales. On Thursday, the Treasury Department designated a network led by Turkish businessman Sitki Ayan that it accused of facilitating the sale of hundreds of millions of dollars worth of oil for Iran’s Islamic Revolutionary Guard Corps.