Mourners transport the coffin of one of two protesters killed in clashes on Wednesday with security forces in the southern Iraqi city of Nasiriyah - Asaad NIAZI
Agence France-Presse
December 7, 2022 — Nasiriyah (Iraq) (AFP)

Two protesters in the southern Iraqi city of Nasiriyah were killed Wednesday in clashes with security forces at a rally after an activist was handed a jail term, authorities said.

Haidar al-Zaidi, 20, was sentenced to three years over a tweet of disputed origin deemed insulting to a pro-Iran ex-paramilitary force, according to court documents seen by AFP Wednesday.

The verdict, which Zaidi can appeal, has sparked criticism on social media.

And on the streets on Nasiriyah -- the regional capital of Dhi Qar province and a flashpoint of anti-government protests -- hundreds gathered on Wednesday evening for a second day in a row.

The protesters deplored the jail term and also demanded compensation for demonstrators wounded by security forces in late 2019, an AFP correspondent said.

Riot police confronted the crowd in the central Habboubi Square with "brutal" force and "fired live ammunition", said demonstrator Mohammed al-Iraqi, who spoke to AFP at a morgue where dozens of relatives and friends of the two fatalities gathered.

Hussein Riyad, a spokesman for the Dhi Qar provincial health ministry, told AFP "two protesters were shot dead" in the clashes and 21 people were wounded, including five by gunfire.

Riyad said a police officer was among those wounded.

Prime Minister Mohammed Shia al-Sudani ordered a security delegation be sent to the province "to investigate the casualties among the demonstrators."

The provincial administration castigated "infiltrators" among the demonstrators who threw Molotov cocktails against the army.

"What happened today was premeditated," it said in a statement. 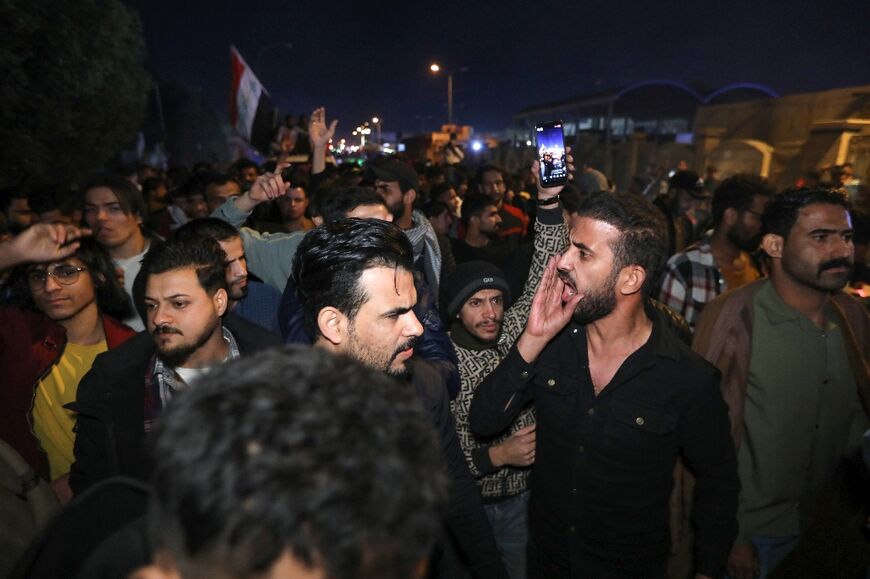 Zaidi was sentenced on Monday in the capital Baghdad over a post, long since deleted from his Twitter account, criticising Abu Mahdi al-Muhandis, the slain deputy commander of the former paramilitary Hashed al-Shaabi force.

Screen grabs of the disputed tweet were shared by accounts close to the Hashed.

The activist wrote on Facebook on Sunday that he faced charges of "insulting state institutions".

Muhandis was killed in a US drone strike in Baghdad in January 2020 alongside Iranian foreign operations commander General Qasem Soleimani.

He is revered as a martyr by the Hashed, a paramilitary group integrated into Iraq's security forces and whose political wing forms part of Iraq's ruling coalition.

"Regardless of who posted the Twitter message, the Iraqi justice system should not be used as a tool to suppress peaceful criticism of the authorities or armed actors," said HRW's deputy Middle East director, Adam Coogle.

"It is a sad reflection on the rule of law in Iraq that an activist like Zaidi gets three years in prison for a Twitter post he says he didn't write while dozens of officials and armed groups enjoy impunity for killing activists and protesters."

On social media, users contrasted Zaidi's jail term with the recent release on bail of businessman Nour Zuhair Jassem, who is accused of fraudulently withdrawing a significant part of $2.5 billion in public funds that were allegedly stolen from a government account.

Nasiriyah was a bastion in a wave of anti-government protests that hit Iraq in late 2019 and were crushed by authorities in a bloody crackdown that killed more than 600 people.

The impoverished city has since seen rallies by young people demanding jobs in the public sector.