Prime Minister Benjamin Netanyahu has presented to his new cabinet amid yelling on the Knesset floor and protests outside. 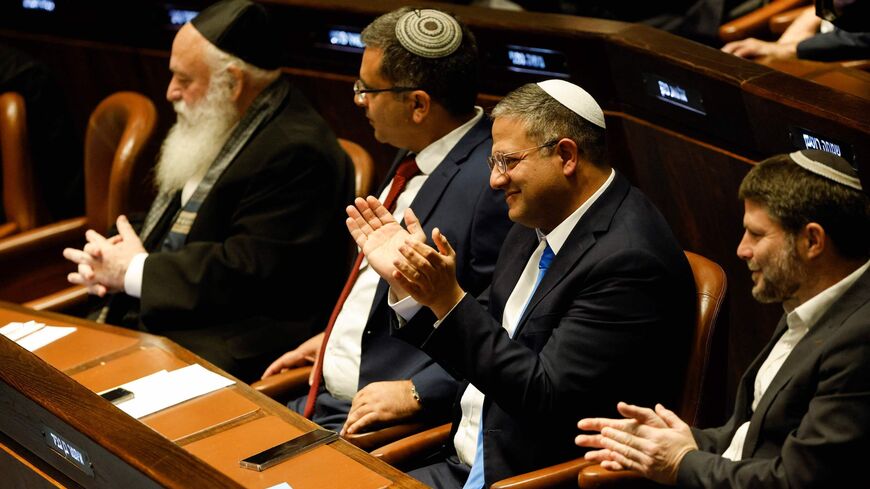 Right-wing Knesset members Itamar Ben-Gvir (2nd R) and Bezalel Smotrich (R) attend a special session at the Knesset to approve and swear in a new right-wing government, in Jerusalem on Dec. 29, 2022. - AMIR COHEN/AFP via Getty Images

Prime Minister Benjamin Netanyahu presented his new government to the Israeli Knesset on Thursday and the swearing-in ceremony was set to take place in afternoon.

The last government, first under Naftali Bennett and then by Yair Lapid, lasted only 18 months. During this period, and while standing trial for bribery and fraud, Netanyahu served as opposition head.

Netanyahu was first elected prime minister in 1996, at the age of 47. Now at 73, after 15 non-consecutive years at the helm of the country, he is heading his sixth cabinet.

With 29 names on Netanyahu’s apparently incomplete ministerial list, his cabinet is set to be one of the largest in Israel’s history but will include only four female ministers.

The position of foreign minister was negotiated until the last moments before the opening of the session. In the end, former Strategic Affairs Minister Eli Cohen received the foreign affairs portfolio. Cohen will reportedly serve in this position for one year while Israel Katz serves as energy minister, and then the two will exchange positions for two years. Then, for the last year, each will resume his original position.

Another surprise was the appointment of Ron Dermer as strategic affairs minister. Netanyahu had hinted that he sees the former ambassador to the United States as his possible successor in the Likud. Dermer is also expected to serve as a member of the exclusive diplomatic-security cabinet, becoming one of the most powerful people in the government.

Netanyahu appointed former senior IDF officer Yoav Galant as defense minister, in what is considered a positive signal toward Washington.

Far-right lawmaker Bezalel Smotrich will serve as finance minister and also within the Defense Ministry. Nationalist legislator Itamar Ben-Gvir will serve as national security minister with expanded policing responsibilities in the West Bank.

Netanyahu presented the Knesset with his new cabinet's top priorities: neutralizing the Iranian nuclear program, creating a bullet train that will cross Israel from north to south to promote the development of periphery towns and expanding the 2020 Abraham Accords by signing more normalization deals with Arab countries.

During the Knesset session, the incoming opposition booed Netanyahu and called him "weak" over was they criticize as giving in to his far-right and ultra-Orthodox coalition partners.

Addressing the shouting, Netanyahu said, "I hear the opposition constantly lamenting about 'the end of the state' or 'the end of democracy.' Members of the opposition, losing the elections is not the end of democracy — this is the essence of democracy. A democratic regime is tested first of all by the willingness of the losing side to accept the majority decision." In comparison, Netanyahu hailed French soccer fans for gracefully accepting their defeat in the World Cup against the Argentinean team.

Amid the shouting inside the Knesset, thousands of people are demonstrating outside. Activists of the Movement for Quality Government in Israel, Women Wage Peace and several groups championing the rights of the LGBTQ community are protesting the coalition’s intention to amend Israel's anti-discrimination law, nationalist Itamar Ben-Gvir becoming national security minister, the government’s expected pro-settlement policies and limiting the independence of the judicial system.