Incoming Prime Minister Benjamin Netanyahu has stated several times that he aspires to normalize ties with Saudi Arabia, but with his pro-settler right-wing partners, the chances of that happening are slim to none. 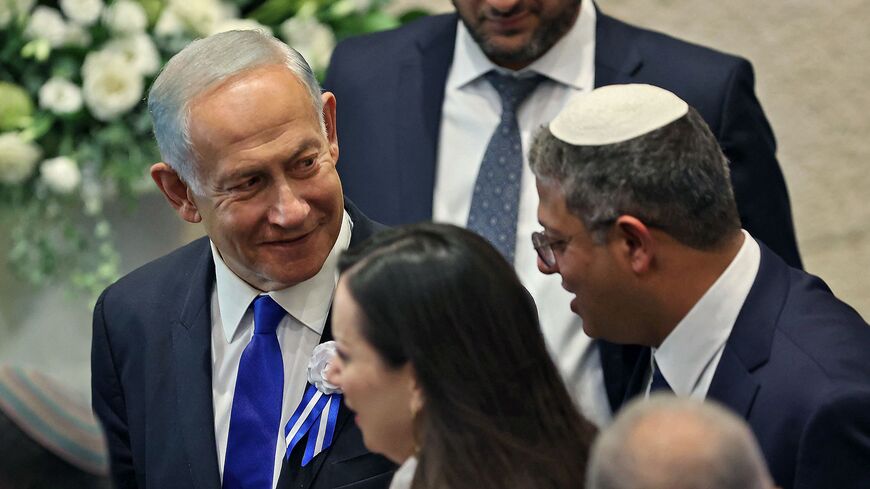 Israeli right-wing Knesset member Itamar Ben-Gvir (R) chats with incoming Prime Minister Benjamin Netanyahu (L) during the swearing-in ceremony of the new Israeli government at the Knesset in Jerusalem on Nov. 15, 2022. Israel swore in a new parliament today hours after a deadly attack, as veteran hawk Benjamin Netanyahu advances talks on forming what would be the country's most right-wing government ever. - ABIR SULTAN/POOL/AFP via Getty Images

Two prominent strategic issues await the attention of Prime Minister-designate Benjamin Netanyahu as he returns to office this Thursday as the head of his sixth government. One is policy on Iran, the other on Saudi Arabia. One embodies threat, the other, hope.

Netanyahu has stated his intention of restoring the Iran issue to the top of his agenda and is expected to dedicate himself to thwarting Tehran’s nuclear ambitions. At the same time, he is expected to do all in his power to rope Saudi Arabia into the 2020 Abraham Accords. Netanyahu views the Saudis as the centerpiece of his peace legacy, a crucial addition to the peace deals he engineered with Bahrain, the United Arab Emirates, Morocco and Sudan. Right now, both missions seem to exceed his reach.

Netanyahu has put together the most radical, zealous and messianic government in Israeli history, which will undoubtedly burden Israel’s array of strategic relationships in the region. That said, Netanyahu is also endowed with proven diplomatic skills and geopolitical understanding and has already embarked on a sweet-talking campaign of lobbying vis-a-vis the Saudis, which will require American input. But his ambitions and skills notwithstanding, relations with Riyadh are hardly up to Netanyahu. In fact, he may be an impediment to such an outcome.

Netanyahu takes office even as an updated military intelligence assessment places Iran on the threshold of nuclear ability in terms of the enriched uranium at its disposal. The authors of the assessment believe Israel should encourage an agreement curbing Iran’s nuclear program, based on the formula of eased economic sanctions in return for curbs on Iran’s nuclear project. Before being ousted from office in June 2021, Netanyahu demanded that the United States and other world powers amend the 2015 agreement with Iran to extend its duration and improve its effectiveness. He would presumably still accept this “longer and stronger” formula, but Iran is no longer likely to play along.

That leaves Netanyahu with only one course of action: a military strike to incapacitate Iran’s nuclear project. Assuming such a drastic measure is even feasible, Netanyahu realizes that he must have a green light from Washington as well as US cooperation and assistance.

Soon after taking office in 2009, Netanyahu explored such options, only to back off in 2012 after realizing that the Obama administration would not go along with his scheme. Ten years on, the successor to that administration, President Joe Biden, is unlikely to change his mind in this regard. A senior Israeli diplomatic source told Al-Monitor recently that Netanyahu would end up missing Obama despite their acrimonious relationship because the Biden administration is far less inclined to support a military strike on Iran than even Obama was.

Prospects of convincing the Americans to provide Israel with diplomatic and strategic air cover for such a move are slim, as are chances of US cooperation in the important post-strike efforts against Iran in the form of a naval blockade, tougher economic sanctions and prevention of an Iranian counter-attack. The Biden administration is greatly concerned about the emerging Netanyahu government but has promised to give it a chance and judge it by its actions rather than by the radical rhetoric of its members. Nonetheless, all signs point to the glaring discrepancy between the government’s ideological underpinnings and the principles and policies of the Biden White House, in almost every respect.

During Obama’s second term, Netanyahu rejected US urgings to make concessions to the Palestinians in return for closer US cooperation on Iran, a formula dubbed by its opponents as “Bushar for Yitzhar” (the Iranian nuclear facility in return for curbing activity in the West Bank Jewish settlement of Yitzhar). One of that proposal’s leading opponents was Knesset member Bezalel Smotrich, who — along with his ultra-radical running mate, Itamar Ben-Gvir — is a leading member of the incoming Netanyahu government and unlikely to accept concessions to the Palestinians.

The same goes for the Saudi issue. Israeli assessments regarding the prospect of progress with Riyadh are divided on the question of whether such a course is feasible during the lifetime of King Salman. Some of the more optimistic experts argue that official relations with Riyadh could be established soon if certain conditions are met, such as US willingness to shift its Saudi policy, Israeli peace talks with the Palestinians, permanent renunciation of plans to annex the West Bank and more. None of these conditions are remotely likely.

Netanyahu, as usual, is playing a duplicitous game, promising Smotrich to advance annexation of Judea and Samaria and impose Israeli law there (in hopes that a Republican return to the White House would facilitate such a move). At the same time, he has pledged to all the international and Arab mediators and envoys who have approached him in recent weeks that he would avoid advancing annexation measures.

Netanyahu knows full well that annexation, as demanded by Smotrich, and permission for Jews to pray on the Temple Mount, as demanded by Ben-Gvir, risk the impressive peacemaking achieved with Arab states in recent years. Nonetheless, he is letting his coalition partners play with fire next to one of the world’s biggest dynamite kegs. He will need all his legendary maneuvering capabilities and a hefty dose of luck to survive these complexities. Normalization with Saudi Arabia at this point appears about as likely as a rapprochement between Russian President Vladimir Putin and Ukraine’s President Volodymyr Zelenskyy.

Speaking of Putin: Netanyahu and Putin spoke earlier this week, inter alia discussing the situation on Israel’s northern front and in the skies over Syria, where hundreds of attacks against Iranian targets have been attributed to Israel in recent years. Netanyahu is deeply concerned about the recently unveiled Iranian-Russian axis that includes weapons supplies and security cooperation with Moscow. He is concerned about Russian attempts to curb Israel’s anti-Iran activity as well as about the boost to Iran's standing in the Middle East provided by its alliance with Russia.

"The most worrying thing," a senior Israeli security official told Al-Monitor on condition of anonymity, "is the fact that the Russians are considering selling Iran advanced Sukhoi fighter jets." Israel has a decisive aerial advantage over Iran and its small, outdated air force. The flow of advanced Russian fighter planes to Iran risks upending this advantage, which has allowed Israel almost complete freedom of action in the skies of the region.