The Islamic State continues to carry out attacks in northern Iraq, creating serious security challenges for the country. 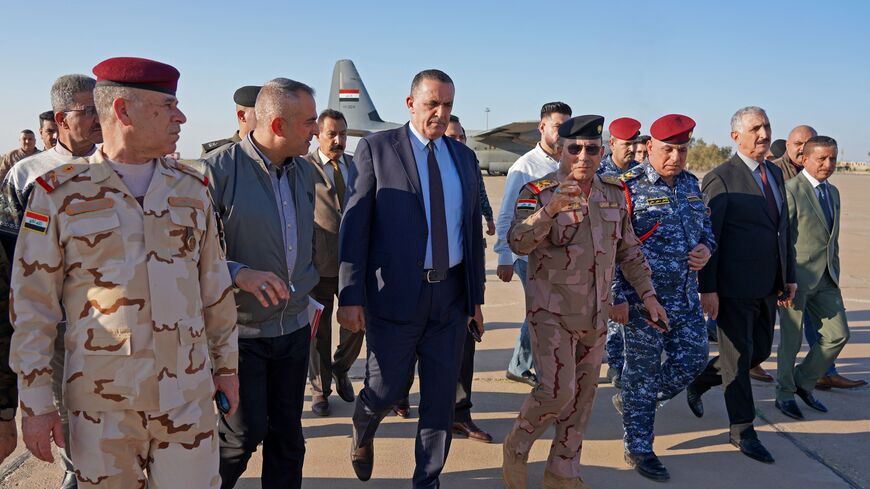 Governor Rakan al-Jabouri (C) attends the repatriation ceremony for members of Iraq's federal police members who were killed in a suspected IS attack, at Kirkuk airport in northern Iraq on Dec. 18, 2022. - MARWAN IBRAHIM/AFP via Getty Images

BAGHDAD — At least nine members of the Iraqi security forces were killed and three others were wounded on Sunday in a bomb attack targeting their convoy in the Kirkuk governorate of northern Iraq.

The Islamic State (IS) immediately claimed responsibility via its Telegram account. The attack took place near Safra, a village about 20 miles south of Kirkuk in the Kurdistan Region.

Immediately following the explosion, a clash broke out between security forces and IS militants, leading to the killing of one IS member.

The area is located near the borders of the Salahuddin and Diyala provinces, and the nature of the terrain — with desert plains and mountains — provides a safe haven for the terrorist organization.

The area falls within the so-called “Death Triangle,” a moniker it received in 2004 when members of al-Qaeda and later IS used the area for preparing attacks in the surrounding areas and even in the capital, Baghdad, in the past.

Although Iraq declared in 2017 that IS had been officially defeated, its sleeper cells are still active in remote areas toward the center of the country and stretching toward the west.

Last week, another IS attack in Salahuddin province killed one member of the Popular Mobilization Units and left two others wounded.

“After the painful blows delivered by our security forces and intensified efforts to pursue the defeated terrorist elements [of IS], these terrorist elements resorted to malicious methods by planting explosive devices near villages inhabited by citizens and in which the security services provide various services,” the media office of Iraq's security services announced on Sunday.

Las week, the Iraqi security forces undertook dozens of operations against IS elements and dens, leading to the arrest of 23 people on terrorist accusations, the killing of 11 members of terrorist organizations and the confiscation of various weapons.

Despite these extensive counterterrorism operations, IS attacks continue to be a serious security challenges for the Iraqi government in the area.

According to a readout of a call between Iraqi Prime Minister Muhammad Shia al-Sudani and White House Coordinator for the Middle East and North Africa Affairs Brett McGurk, the United States reiterated its support for Iraq's stability. Both sides noted the “importance of continuing efforts to ensure the enduring defeat of ISIS and supporting Iraq's regional role in building bridges between the countries of the region."

Jordan is hosting the second round of the so-called Baghdad Conference Tuesday. The forum, which brings together Iraq's neighbors to focus on security challenges of the region, will address dealing with challenges presented by IS at the top of the agenda.