US military in touch with Saudi Arabia over threat from Iran

Pentagon officials would not corroborate a Saudi report of a potential imminent attack from Iran on Saudi Arabia and Iraq. 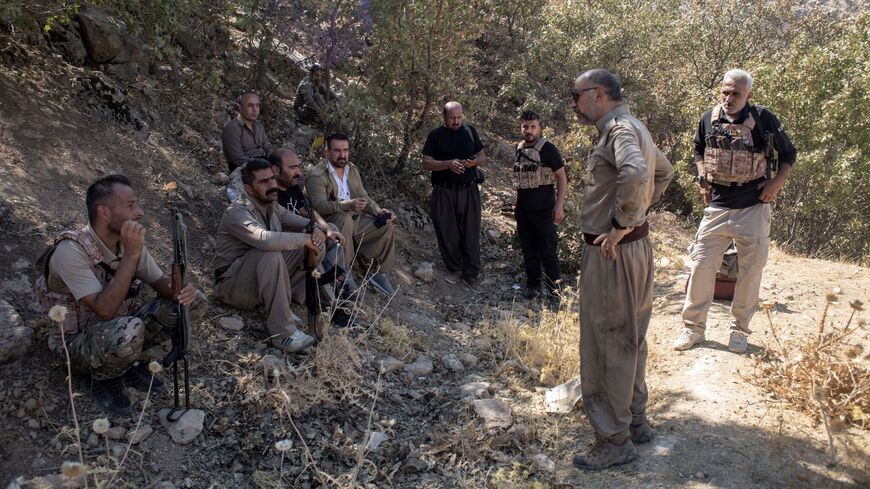 Members of the Komala opposition party regroup after the heavy drone and missile attacks on their headquarters. Iranian missiles and drones struck multiple headquarters of Kurdish opposition groups in the KRI on Sept. 28, 2022 in Sulaymaniyah, Iraq. - Hawre Khalid/Getty Images

US military and intelligence officials have been in close touch with counterparts in Saudi Arabia over a potential attack in the region by Iran, US officials said on Tuesday.

“We are concerned about the threat picture and we remain in constant contact through military and intelligence channels with the Saudis,” a spokesperson for the White House’s National Security Council said in a statement today. “We will not hesitate to act in the defense of our interests and partners in the region.”

The acknowledgement came after the Wall Street Journal reported that US military forces in the region were on high alert after Saudi Arabia shared intelligence indicating an imminent attack from Iran targeting the kingdom and the Kurdistan region of Iraq.

The White House’s statement appeared to confirm some details of that report, but Pentagon officials were unwilling to offer any further clarity.

“As you know, I’m not going to talk about specific force protection levels,” Pentagon press secretary Brig. Gen. Pat Ryder told reporters when asked about the situation on Tuesday afternoon.

“I can say that we do remain concerned about the threat situation in that region. We’re in regular contact with our Saudi partners,” Ryder said. “We will reserve the right to protect and defend ourselves no matter where our forces are serving, whether in Iraq or elsewhere.”

When asked by Al-Monitor, Ryder declined to acknowledge whether Saudi officials had shared information with US counterparts indicating any specific threat.

Saudi government sources told the Journal that Iran intends the attack as a distraction from intense anti-government protests that have swept over the country in the past several weeks.

Iranian leaders have publicly blamed the US, Saudi Arabia and Israel for supporting the uprisings, which began after an Iranian Kurdish woman died on Sept. 16 in the custody of morality police in Tehran.

US officials, including President Joe Biden, have dismissed the accusations as baseless. Last month Tehran warned Saudi Arabia to curtail Persian-language news coverage of the protests taking place across Iran.

“I have a recommendation to Saudi Arabia, which is trying to trick our youth with the support of some media outlets," Hossein Salami, commander of Iran’s Islamic Revolutionary Guard Corps (IRGC), said on state television last month. “Be careful of your behavior and control these outlets, or the smoke will blow in your face.”

Iran and militias it supports around the region have been known to launch ballistic and cruise missiles as well as drones into neighboring states amid disputes in recent years, most notably in the 2019 barrage on Saudi Aramco facilities at Abqaiq and Khurays, and the January 2020 ballistic missile strikes on bases used by US troops in northern Iraq.

The latter attack, which came in response to the US assassination of Iran’s IRGC Quds Force commander Maj. Gen. Qasem Soleimani, left more than 100 American military personnel with concussive injuries. The blitz also showed senior US military officials the precision capabilities of Tehran’s arsenal, unmatched by any country in the region other than Israel.

More recently, in late September, Iran launched dozens of ballistic missiles and drones against Kurdish militants in northern Iraq which it alleged were supporting the domestic uprising in Iran. A dual US-Iraqi citizen was among those killed in the strikes.