The African continent has a lot of potential to produce hydrogen as an energy source, but there are also many challenges, according to some observers. 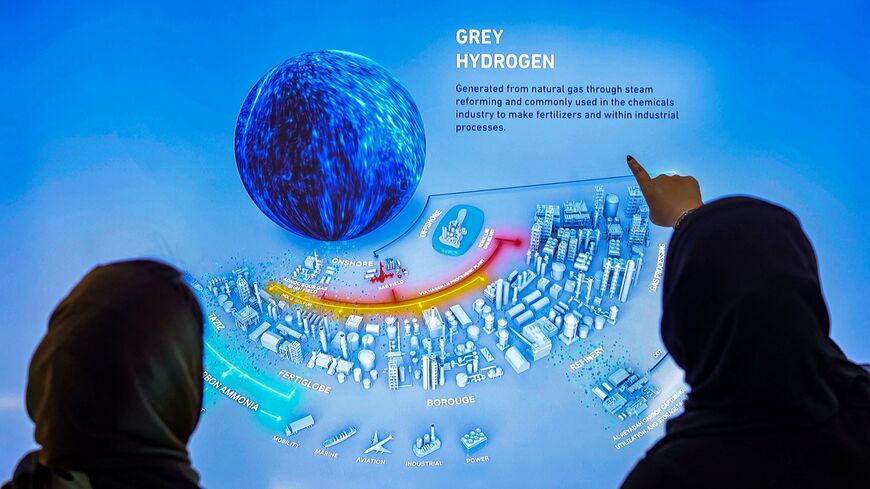 Delegates view an infographic on grey hydrogen, produced from natural gas, at the UAE pavilion during the COP27 climate conference at the Sharm el-Sheikh International Convention Centre, in Egypt's Red Sea resort city of the same name, on Nov. 9, 2022. - FAYEZ NURELDINE/AFP via Getty Images

Hydrogen continues to be a major topic at the United Nations Climate Change Conference, aka COP27.

The Emirati renewable energy company Masdar released a report today on the potential of the African continent to become a hub for the generation of green hydrogen.

What is green hydrogen? Hydrogen can be used as an energy source when it is separated from water via electricity. When that electricity is powered by renewable energy, such as solar or wind power, it is referred to as green hydrogen.

Africa’s potential: Masdar identified several factors that indicate the potential of African countries to produce green hydrogen. The continent has an abundance of sunshine and land, as well as relative cost effectiveness vis-a-vis other areas.

The Abu Dhabi-based company, which is owned by the Emirati government, predicted that Africa could produce 30 to 60 million tons per year of green hydrogen by 2050. This would require between $680 billion and $1.3 trillion in investment, however. At present, Africa as a whole accounts for only about 3% of global hydrogen project announcements, according to Masdar’s report.

Masdar is not alone in its thinking. The DC-based Brookings Institution released a report in May noting Africa’s excellent solar and wind resources and hydropower potential along the Nile and Congo rivers. The report further noted that several European countries have expressed interest in developing Africa’s hydrogen sector.

Challenges: It will be difficult for Africa to become a hydrogen hub, however. The Brookings report also pointed out that more than half of Africa’s population does not have electricity. Hydrogen also requires water at a time of rising water scarcity in Africa. Moreover, maritime shipping of hydrogen would add to costs, according to Brookings.

Why it matters: Gulf states, including the UAE, are showing increasing interest in green hydrogen. In May, the Abu Dhabi National Oil Company signed a green hydrogen cooperation agreement with British Petroleum.

Some of the Gulf’s hydrogen projects are in Africa. In October, Saudi Arabia’s ACWA Power signed a green hydrogen deal with South Africa.

Egypt and Morocco have also shown a strong interest in green hydrogen. The Saudi company Alfanar pledged in August to start building a green hydrogen plant in Egypt.