Entrepreneurs from the West Bank and Gaza recently visited Dubai to attend a conference on funding for new businesses. 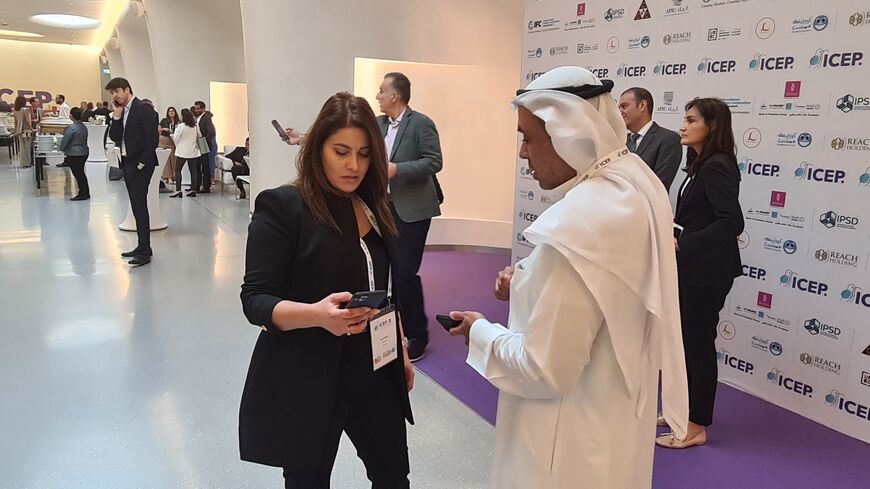 Tawazon founder Suna Zoabi from Palestine networks with others attending the fourth edition of the International Conference on Entrepreneurship in Palestine (ICEP), held in Dubai for the first time, on Nov. 1, 2022. - Salim Essaid/Al-Monitor

About 20 Palestinian startups traveled to Dubai this week to the fourth edition of the International Conference on Entrepreneurship in Palestine (ICEP), to pitch their business ideas to investors.

ICEP attendee Christina Ganim is a co-founder of Kenz, a Ramallah-based e-commerce platform selling women’s intimate wear in the Gulf. “We’re actually raising an investment right now of $1.5 million in order to expand and dominate our current markets,” said Ganim, who has closed 15% of her company’s pre-series A round.

Saudi Arabia is her biggest target due to its high consumer purchasing power, established payment gateways, logistics and supply chains, said the businesswoman.

"​We're particularly focusing on the Saudi Market because PayPal doesn't work in Palestine. They don't recognize Palestine as a country. … So how is our business even supposed to get set up and going when the largest payment gateway doesn't actually work? Or allow them to operate in a legitimate way, like all the other startups in the world?” she said to Al-Monitor.

“Having a startup is kind of overcoming the bureaucracy of the [Israeli] occupation," she added. "So we're avoiding it.”

Her method has proven successful, with Kenz being the only Palestinian company to raise money out of 249 startups from the Middle East and North Africa (MENA) in the first half of 2021, which altogether reeled in a record-breaking $1 billion, according to Wamda.

Ganim said that six investors at the event from the United Arab Emirates, Palestine and Saudi Arabia scheduled meetings with her.

In 2022, MENA startups raised $2.2 billion in the first eight months — a 29% increase from the $1.7 billion recorded in the same period last year, reported Wamda.

The UAE accrued the most funding at $233 million, followed by Saudi Arabia at $103 million and Egypt at $38 million.

As the world grows increasingly dependent on online payment systems and conducting business in environments such as the metaverse, Palestinian startups are finding new pathways to investment and more.

“The beauty of digital technology, tech-enabled companies, is that … they see no borders,” said Hashim Shawa, Bank of Palestine chairman and ICEP co-chair.

"It's a great time to be a Palestinian entrepreneur and a startup. You have all the stars aligned, or the success factors, where the ecosystem is ready and built,” said Shawa, who also said there was a lot of venture capital interest from the ICEP audience and indications of regional collaboration at the event, which was held for the first time in Dubai.

“We just signed with the [Dubai International Finance Center] a cooperation agreement between the [Bank of Palestine] and our innovation hub,” he told Al-Monitor, citing four hubs in the West Bank and Gaza.

More than 300 startups have been created in the West Bank and Gaza since 2010 according to ICEP, with much of it only recently and 35% of the ecosystem being developed between 2020 and 2021.

An average of 19 additional startups were created in the West Bank and Gaza each year from 2009 until 2018, according to a World Bank report.

Talent and highly educated founders were considered key strengths in the Palestinian ecosystem, while limited managerial experience and acumen stood as obstacles, stated the 2018 report. In addition to formal education on management, foreign investment was considered the most impactful factor for their long-term success.

“There’s a huge potential for profit,” said Habib Hazzan, co-founder and managing partner of Ibtikar Fund, which has funded 29 startups.

“There is a lot of talent in Palestine; it’s affordable and very accessible,” said Hazzan, who helped raise $10.5 million in 2016 when the fund was founded and $30 million in 2022 pending closing.

He said there are two components that Palestinian startups need to flourish: access to funding, and access in general.

One of Ibtikar Fund’s success stories is Tawazon, the first Arabic language mindfulness and meditation app, which uses cognitive processing therapy to help decrease stress and anxiety. Founded in 2019, it has achieved a place in the App Store and Google Play, reaching consumers globally. “Today we have 250,000 users of Tawazon; 20,000 of them are active monthly users,” said Suna Zoabi, founder and CEO of the mental health app.

She says that Ibtikar is the only fund that startups have access to in Palestine, and while that’s starting to change, they need direct access to Middle East, European or American funds to truly grow.

Zoabi said that in addition to Ibtikar Fund, she has also found a Kuwaiti investor for her pre-series A fundraising and is hoping to find more in the broader Middle East.

“We're looking for somebody who can open doors in the GCC on the Saudi-specific market,” she said, adding that events such as ICEP bring her closer to the 70% of her clients who come from Gulf countries.