Palestinian Authority calls on the international community to halt implementation. 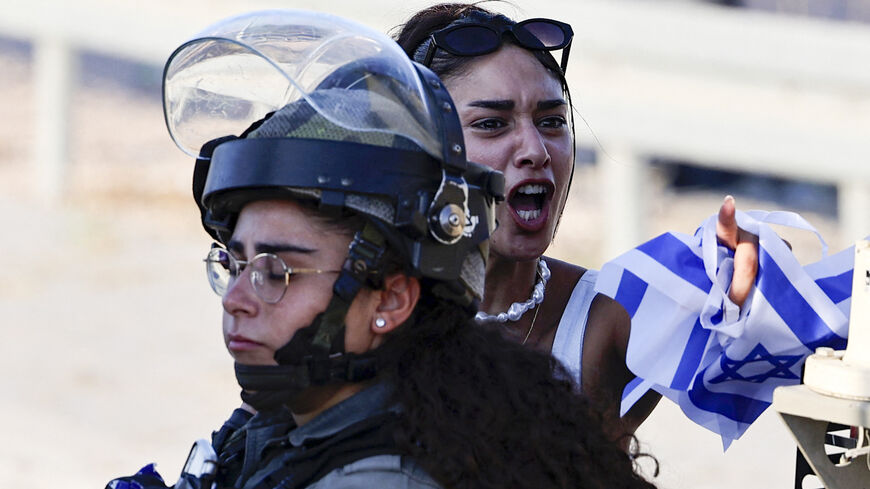 An Israeli settler surrounded by Israeli security forces holds national flags as she yells at Palestinians protesting against Jewish settlements, east of the occupied West Bank town of Qalqilia, on Aug. 11, 2022. - JAAFAR ASHTIYEH/AFP via Getty Images

RAMALLAH, West Bank — Likud leader Benjamin Netanyahu, who is tasked with forming the Israeli government, and leader of the far-right Jewish Power party Itamar Ben-Gvir agreed on Nov. 16 to legalize 65 settlement outposts within 60 days of forming the new government and amend the Disengagement Law under which Israel dismantled four settlements in the northern West Bank and all settlements in the Gaza Strip in 2005.

The amendment allows the return of settlers to the four evacuated West Bank settlements, including the controversial Homesh settlement located between Jenin and Nablus, which includes a makeshift religious school attended by tens of thousands of settlers.

On the same day, Nov. 17, the Palestinian Ministry of Foreign Affairs urged in a press statement the international community and the US administration to take the necessary measures to ensure that the agreement between Netanyahu and Ben-Gvir is not implemented to avoid retroactively legalizing settlements and outposts on Palestinian lands.

The ministry warned that such a move would undermine any future political negotiating process and help Israel deliberately sabotage the opportunity to achieve peace based on the two-state solution, while also thwarting any international and regional efforts exerted to build trust between the Palestinian and Israeli sides.

The agreement between Netanyahu and Ben-Gvir is a step toward building a right-wing coalition in Israel based on expanding settlements in the West Bank, in the absence of any political solutions with the Palestinian Authority (PA). It also increases the pace of the Judaization of Jerusalem and the Israeli violations at Al-Aqsa Mosque. All of this will cast a heavy shadow over the PA and its relations with Israel. Politically, the agreement ends all possibilities of reaching a political solution to end the occupation and gives Israel the opportunity to legally move forward with annexing more Palestinian lands.

Wasel Abu Youssef, a member of the PLO Executive Committee, told Al-Monitor that this agreement is tantamount to a declaration of war against the Palestinian people and the international community.

“The international community needs to act immediately. What Israel is doing, in the presence of fascist elements in the next government, aims to destabilize the security situation not only in Palestine but also in the region,” he said.

Abu Youssef noted that the Palestinian leadership is committed to the decisions of the Palestinian central and national councils respectively regarding ending relations with Israel, and continues to resort to international institutions, including the International Criminal Court, to hold Israel accountable.

For his part, writer and political analyst Omar al-Ghoul told Al-Monitor, “The agreement between Netanyahu and Ben-Gvir reflects the nature of the upcoming stage in which Netanyahu will lead a fascist government, which will commit war crimes and perpetuate settlements through the enactment of racist laws. Consequently, the Palestinians believe that this agreement poses a major threat to what is left of the future of peace.”

Ghoul pointed out that forming this right-wing government eliminates the two-state solution from the Israeli agenda and proves to everyone that there is no partner for peace in Israel and that it will escalate the cycle of violence, raids, military and settlement wars, and cleansing operations in Jerusalem.