Lawmakers in Iran call for severe punishments for "rioters" amid the country's unrest. 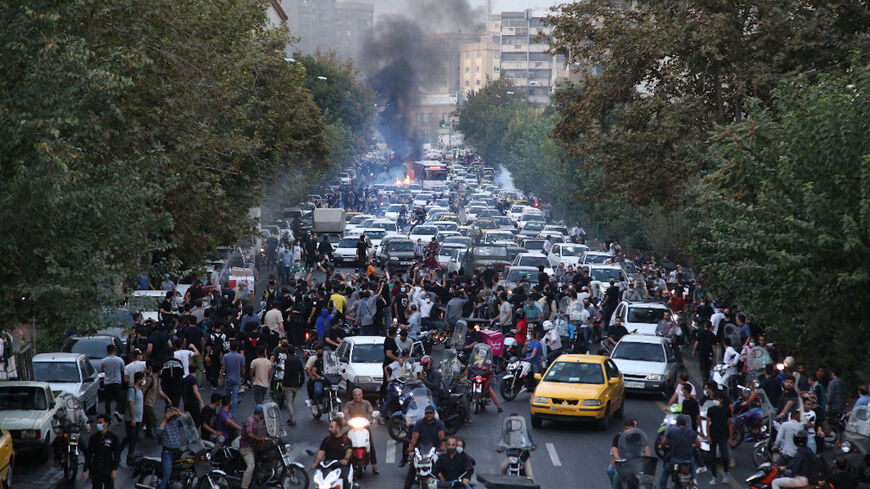 A picture obtained by AFP outside Iran on Sept. 21, 2022, shows Iranian demonstrators taking to the streets of Tehran during a protest for Mahsa Amini, days after she died in police custody. - AFP via Getty Images

During an open session of parliament on Nov. 6, 227 parliament members signed an open statement asking Iran’s judiciary to take “decisive” action against protestors.

The statement began by saying that enemies of Iran have tried for over 40 years to destroy the country through the arming of separatists, supporting Saddam Hussein, so-called crippling sanctions and supporting various protests, which the statement referred to as “seditions.” The statement continued that the United States has failed in its policies against Syria, Yemen and Iraq, and is now targeting Iran from the inside.

With respect to the current protests, which the statement referred to as “riots,” it claimed that the United States and other enemies of Iran have “openly entered the scene” and have now taken on the leadership financially as well as with arms and commandment. The statement added that they have encouraged “thugs” to attack security forces, leading to dozens of deaths.

The statement said that parliament members want the judiciary to quickly confront the protestors who attack the country like the Islamic State and asked that those who are guilty of protesting and destroying property be punished with equal consequences. Some have interpreted the statement to read that parliament is seeking the death penalty for all protestors because of the language used in the statement.

Amini died suddenly in police custody, immediately leading to protests across the country. The protests, while initially sparked by Amini’s death, were essentially from day one anti-government protests against the entire establishment. According to a number of international observers, over 300 protestors have been killed so far, a large amount even by standards of Iranian protests given the short time span of the protests.

The protests have also caused an additional rift between Iran and Saudi Arabia over the Saudi-linked Persian language network, Iran International, which has been supportive of the protests and often includes some of the more extreme coverage of Iran. According to conservative analyst Sadollah Zaeri, Iran had officially threatened Saudi Arabia through diplomatic channels over their support for Iran International. Saudi Arabia, for its part, denied they are linked at all to the network. To this, Zaeri responded, “If Iran International does not belong to them, then many of the events (consequences) have no link to us.”

Previously, Hossein Salami, commander of the Islamic Revolutionary Guard Corps, publicly warned Saudi Arabia over the network’s coverage. Zaeri said that Salami’s warning was the official position of the Islamic Republic, and it was a calibrated decision made within the establishment.