The head of the IRGC has issued a warning to Saudi Arabia over coverage by Persian-language news outlets. 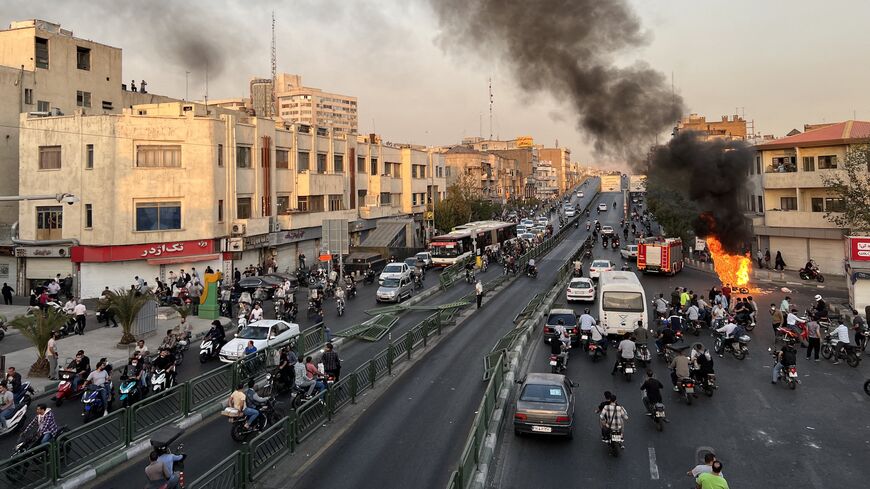 A picture obtained by AFP outside Iran reportedly shows a motorcycle on fire in the capital Tehran, Oct. 8, 2022. - AFP via Getty Images

The head of the Islamic Revolutionary Guard Corps has issued a warning to Saudi Arabia about the country’s Persian-language media coverage of protests in Iran.

IRGC commander Hossein Salami said, “I have a recommendation to Saudi Arabia, which is trying to trick our youth with the support of some media outlets. I am warning the Saudi regime: Be careful of your behavior and control these outlets or the smoke will blow in your face.” He continued, “We give you the final word because you are interfering in our internal affairs with these media. We told you, be careful.”

Iran has been rocked by protests since the mid-September death of Mahsa Amini, a 22-year-old woman who died while in custody of the so-called morality police.

While Salami did not name the media outlets he was talking about, it's clear one of his intended targets was Iran International, a UK-based Persian-language outlet with reported ties to Saudi Arabia. Launched in 2017, Iran International has been controversial but successful. With offers of higher salaries, it has lured multiple journalists away from more established outlets. Its news coverage is known for being more sensational and its journalists more opinionated on social media. However, in times of protests, that subjectivity tends to draw more viewers than the rigid guidelines that outlets like BBC Persian must adhere to.

Salami’s comments show that the authorities are still concerned about the protests that followed Amini's death after she had been apprehended for violating hijab laws. Her death sparked protests that spread from the streets to many schools, particularly high schools. Many young women have removed their veils during the protests in protest against Iran's mandatory hijab.

Other Iranian officials are angry about Western leaders' reactions to Iran’s domestic affairs. President Ebrahim Raisi said that the United States is “happy” to see unrest in Iran. Foreign Ministry spokesman Nasser Kanani criticized US President Joe Biden for “supporting the riots in Iran,” as Iranian authorities refer to the protests. Kanani stated that Biden “does not have good advisors nor a good memory" and that "Iran is stronger than to submit to oppressive sanctions or empty threats.”

One of the more shocking events to happen in the last month possibly related to the protests is a fire at Evin prison, where many political prisoners are housed. During the fire, which broke out at night and has appeared in videos on social media, the sound of gunshots could be heard. According to officials, four people have died from the fire and others hospitalized. According to government sources, the four individuals who have died — allegedly due to smoke inhalation — were in prison for theft. The head of the judiciary, Gholam Hossein Mohseni Ejei, said that the fire was the work of “agents of enemies.”