While Iraq has been unsettled by Iranian strikes on Kurdish groups, Tehran appeared adamant in its demand for their ouster from Iraqi soil. 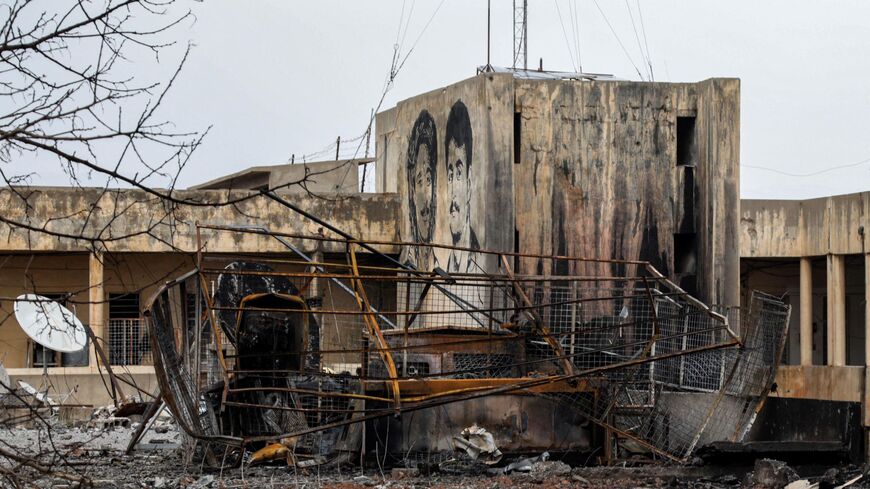 This picture taken on Nov. 26, 2022 shows a view at damage sustained at the headquarters of the Kurdistan Democratic Party of Iran following an Iranian cross-border attack in the town of Koye (Koysinjaq) in the autonomous Kurdish region of northern Iraq. - SAFIN HAMED/AFP via Getty Images

Iran's Supreme Leader Ali Khamenei criticized the presence of Iranian Kurdish opposition groups based in Iraqi Kurdistan and called on Baghdad to use its power against them.

Khamenei made the request at a meeting with Iraqi Prime Minister Mohammed Shia al-Sudani, who was in Tehran on Tuesday. Prior to the meeting, according to Iranian state media, Sudani announced at a joint presser with Iranian President Ebrahim Raisi that Iraq will not allow its soil to be used to destabilize other countries.

Despite that pledge, Khamenei still said that anti-Iran activity "is unfortunately happening in some areas of Iraq," in an apparent reference to Iranian assertions that opposition groups are operating from Iraq's semi-autonomous Kurdish region. "The only solution is that the central Iraqi government expand its authority to those areas as well," the Iranian leader told Sudani.

Iran's state media did not specify whether Sudani had addressed Khamenei's demand, but quoted him as repeating his promise, and saying that "the security of Iran and Iraq are intertwined."

The Iraqi premier's visit came in the wake of four rounds of deadly Iranian strikes on Kurdish groups in the past two months. Authorities in both Baghdad and Erbil have been open in their criticism, condemning Iran for violating international laws and Iraq's sovereignty.

Iran, however, insist that it will press ahead until the Kurdish groups are fully dismantled and pushed out. Tehran claims that the Iraq-based Kurdish opposition is fomenting more than ten weeks of unrest that has gripped Iran after 22-year-old Mahsa Amini's death in custody of morality police. In their crackdown, Iranian security forces have killed at least 451 protesters, according to the foreign-based Human Right Activists News Agency.

While throwing their moral and political support behind the protests, the Kurdish opposition groups have denied acts of provocation, and accuse Iran of trying to drag them into a military conflict.

The Islamic Republic is also pressing Iraq — where it has over years been consolidating influence — to take over border security from the Kurdish Regional Government.

In recent weeks, Kurdish activists have raised concerns of a potential Iranian military incursion into Iraqi Kurdistan, with their footage showing deployment of Iranian armored vehicles on the border. Iran's Ambassador to Baghdad, Mohammad Kazem Al-e Sadegh has, however, ruled out such plans.