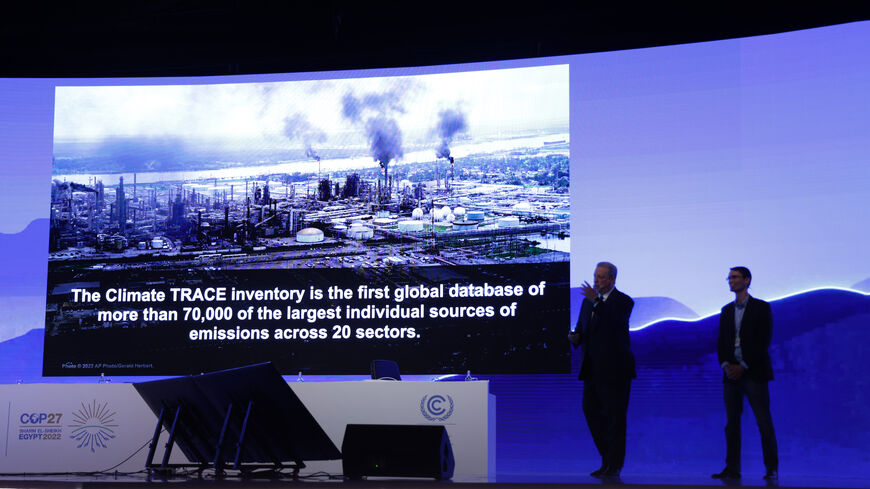 CAIRO, Egypt — Egypt, the United States and Germany launched on Nov. 11 at the UN climate conference COP27 an initiative that aims to reduce methane emissions from the Arab country’s oil and gas sector by adopting measures to eliminate flaring, venting and leaking in its infrastructure.

The step is part of a broader declaration signed between the three countries to accelerate Egypt’s energy transition. Yet in addition to its environmental benefits, the move could also capture at least 2 billion cubic meters (bcm) of gas that is currently wasted at a time when Cairo is trying to increase the production and export of this fuel, mainly to Europe. US President Joe Biden raised the figure to 4 bcm in his remarks at the climate summit.

“How significant and real this will be, we still don’t know,” Mark Davis, CEO of Capterio, a company focused on reducing emissions and creating value from wasted gas from flaring, told Al-Monitor. “But Biden has recognized, for the first time, the real opportunity to reduce emissions in Egypt, create value and bring gas to the market,” he said.

Globally, it is estimated that around 260 bcm of gas is lost every year from flaring, venting and leaking, equivalent to more than 1.5 times the European Union’s (EU) gas imports from Russia in 2021, according to a detailed study released in March by Capterio and the Columbia Center on Sustainable Investment (CCSI) at Columbia University.

For North Africa, the study found that about 23 bcm of gas is wasted annually for the same reasons, accounting for about 15% of Russian gas imports to the EU last year. At current high natural gas prices, the study noted that this lost amount could generate additional revenue of about $29 billion per year for the countries in the region, which already have much of the infrastructure in place to use this gas and even market it.

In parallel, the study estimated that, in global terms, the resulting emissions of this wasted gas are up to 6.8 billion CO2-equivalent tons of greenhouse gases. In North Africa, the reduction in emissions from the sector’s operations could be as much as 86%.

“Flaring gas leads to CO2 emissions, and on top of it, is wasted. And instead of recovering that wasted gas, we explore for more, delaying the [energy] transition,” Perrine Toledano, director of research and policy at CCSI and coauthor of the study, told Al-Monitor. “You explore for more and we shouldn’t, and you pollute. It’s a huge market failure,” she added.

Egypt has been gaining importance as a gas exporter, particularly to Europe in recent months. But its capacity to significantly and sustainably increase its supply under current conditions is considered largely constrained. This is due to limited spare capacity at its two LNG plants, on which its greatest export hopes are pinned, high domestic consumption, rapidly dwindling reserves in gas fields and intermittent outages.

For these reasons, many experts argue that Cairo’s options to boost exports rely heavily on importing gas from Israel and then exporting it using its own infrastructure, until it is able to make new discoveries of large gas fields — if it ever does. However, Davis noted that focusing on gas that is already being produced but is currently wasted would yield benefits more quickly and at a much lower cost than new explorations and exploitations.

Egypt currently wastes around 3.7 bcm of gas every year from flaring, venting and leaking, which amounts to 5.5% of its production and 41% of its exports in 2021, according to a study prepared ahead of COP27 by Capterio and the nonprofit Clean Air Task Force. The study states that this amount could bring about $7 billion in additional revenue to Egypt and reduce its emissions by up to 88 million CO2-equivalent tons.

Most of this gas, around 2.1 bcm annually, according to the World Bank, is lost because Egypt still has significant flaring. In fact, the study notes that Egypt is the world’s 12th largest flarer. And even if it has considerably lower rates than Algeria, its flaring intensity is twice the world average, 20 times that of Saudi Arabia and 50 times that of Norway.

“[This gas] is already discovered and it is already in production. And unlike exploration, there is no risk of drilling a dry well. This gas can be recovered with proven technical solutions whilst delivering commercial returns, so we must now mobilize to put investments in place,” Davis, who also manages the real-time flare tracker FlareIntel, said.

The study coauthored by Davis estimates that 90% of all flaring in Egypt occurs routinely and that 75% of its flared volumes are concentrated within 20 kilometers of an existing pipeline, making it a relatively quick and easy problem to fix that can also yield attractive returns.

For Egypt, this is also nothing new as the country has already been making some efforts to reduce gas flaring over the past few years. Compared to 2016, flaring is now 26% lower, according to World Bank data. And this is partly the result of specific projects implemented by operators in Egypt that have already started to demonstrate that flare capture projects are commercially attractive, Davis noted.

“Egypt has done well on reducing flaring in recent years, and we can prove it using satellite flare tracking. There are some great examples over a range of scales. But there is more to do,” Davis noted. “To solve this problem, you need capital, of course, but you also need coordination from the government. An asset-by-asset approach is unlikely to deliver the true prize, as operators will need to collaborate,” he added.

Now, according to the document signed during COP27, the United States and Germany intend to mobilize an initial amount of over $250 million to support the energy pillar of Egypt’s NWFE program, which is the government’s flagship initiative for mobilizing climate finance and private investments directed to accelerate the national climate agenda.

The agreement also states that Germany and the United States will assist Cairo in mobilizing other sources of financing. And a portion of all these funds will be allocated to projects aimed at capturing the amount of gas the country currently wastes each year.

“We can reduce emissions, we can create revenue, we can create jobs, we can stimulate the economy and we can accelerate the green transition,” Davis said. “We need to seize this moment, and urgently, for our economies and for the environment,” he concluded.