US strikes knocked off the jihadist group's second-highest Syrian commander and a smuggler believed to have helped kidnap and behead Kurdish officials. 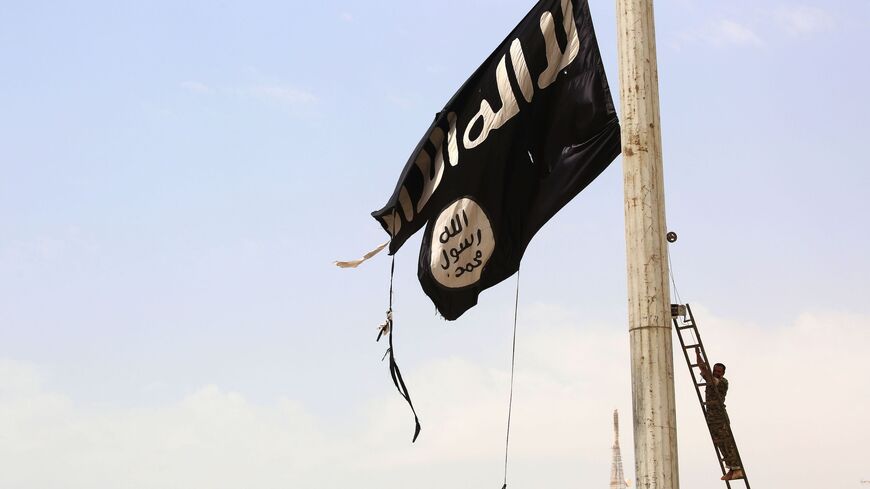 A member of the US-backed Syrian Democratic Forces (SDF), made up of an alliance of Arab and Kurdish fighters, removes an Islamic State group flag in the town of Tabqa, about 55 kilometres (35 miles) west of Raqa city, on April 30, 2017, as they advance in their battle for the group's de facto capital. - DELIL SOULEIMAN/AFP via Getty Images

The Islamic State’s deputy commander in Syria — one of the jihadist group's top-five ranking leaders whom US military officials named as Abu Hashum al-Umawi, aka Abu 'Ala — was killed in a drone strike in northern Syria around 6:23 p.m. local time on Thursday.

That strike also killed a second IS official, Abu Mu’ad al-Qahtani, whom US officials said was responsible for prisoner affairs. More than 1,000 hours of intelligence collection led to the operation, military officials said.

The precise location of Thursday’s drone strike was not immediately clear, but it came several hours after a rare helicopter-borne US special operations raid near the northeastern Syrian city of Qamishli left another Islamic State operative dead and saw at least two of his associates captured.

Rakkan Wahid al-Shammari, a senior IS official suspected of smuggling weapons and fighters for the jihadist group, was targeted by US special operators in the overnight kill-or-capture raid on Wednesday.

American forces were unable to capture Shammari alive, one US official briefed on the operation said, without elaborating further. That official and one other told Al-Monitor on condition of anonymity that Shammari was involved in the recent beheading of two captured Syrian Kurdish militia officials.

Neither civilians nor US troops were injured as a result the raid, US Central Command (CENTCOM) said in a statement today. “US CENTCOM is committed to our allies and partners in the enduring defeat of ISIS,” spokesperson Col. Joe Buccino said.

Whether Shammari’s associates were affiliated with IS or local pro-Syrian regime militias was not immediately clear. A US official speaking not for attribution said Russian military units in the area were not alerted in advance of the raid, despite frequent use by both sides of a shared de-escalation phone line.

Why it matters: The strikes come less than a month after US and Kurdish forces rounded up more than 300 jihadist operatives inside the sprawling al-Hol detention camp for IS families in a weeks-long operation that provided a trove of intelligence.

Kurdish forces thwarted a major IS counterattack on the camp late last month after a vehicle bomb detonated prematurely on the way to the facility.

Some 900 US troops remain in Syria in support of Kurdish and Arab militias in the wake of the multinational war against the Islamic State. The jihadist group was defeated on the battlefield at the Battle of Baghouz in March 2019, but maintains a low-level insurgency in some rural areas of Iraq and Syria.

Some 56,000 family members of IS fighters remain in the al-Hol camp, dubbed “a humanitarian catastrophe” by the commander of all American military forces in the Middle East last month.

Pentagon officials continue to warn that al-Hol and the other makeshift facilities holding tens of thousands of IS prisoners in northeast Syria are not sustainable, and that the jihadist group’s remaining sleeper cells continue to try to recruit prisoners and stage breakout attempts.

What’s next: The US-led coalition shifted to the final phase of its defeat-IS mission in 2020, but there’s no sign of an American withdrawal on the horizon.

While much progress has been made training and equipping Iraqi and Syrian Kurdish forces, the Pentagon assesses both remain unable to sustain adequate pressure on the jihadist group without limited local US military support.

Without heavy weapons or aircraft of their own, Syria’s Kurdish militia forces are particularly vulnerable to attack from Turkey, whose government considers them a terrorist organization inextricable from the Kurdistan Workers Party (PKK).

In July, Dana Stroul, the Pentagon’s top official for Middle East policy, publicly called for a resumption of peace talks between Turkey’s government and the PKK, warning that Ankara’s threats to attack the Kurdish forces in Syria risks springing some 10,000 IS fighters from prison.

Know more: Read Jared Szuba’s report on renewed US military support for Iraq’s Kurdistan region as the hunt for IS sleeper cells carries on.