US dismisses Turkish criticism of imbalance in Mediterranean

The US ambassador to Turkey stated that America is focusing on the Russian invasion of Ukraine amid simmering tensions between Turkey and Greece. 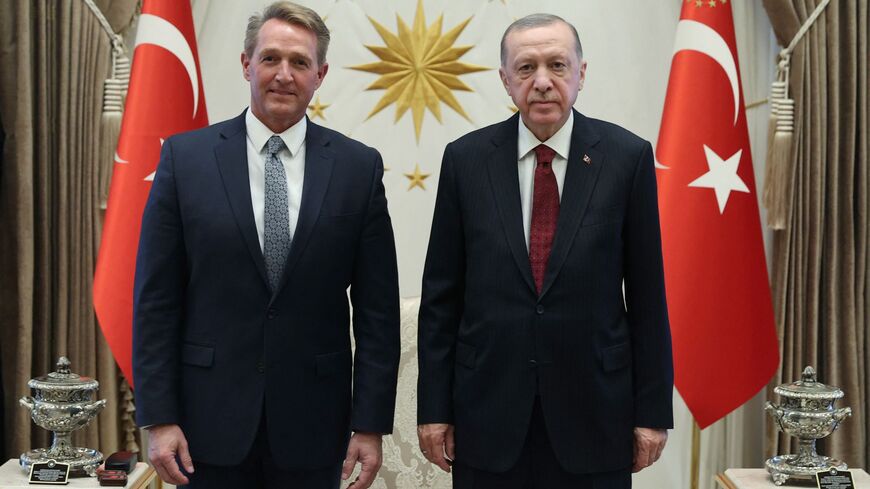 In response to Turkey’s criticism of the United States' “unbalanced” approach towards its territorial conflicts with Greece and Cyprus, Washington has underscored its efforts to counter the Russian invasion of Ukraine.

Washington’s security cooperation with Turkey and Greece “does not come from a position of partiality or imbalance towards any single partner,” US Ambassador to Turkey Jeff Flake said in a statement released on the embassy’s Twitter account.

The ambassador’s statement followed Turkish Foreign Minister Mevlut Cavusoglu's criticism of Washington’s departure from its “traditional balanced policy” in the territorial conflicts between Turkey and Greece.

“I have been asked recently if there has been a shift in the US security posture in the Aegean. The answer is no,” Flake added.

In recent months, US military buildup in the Greek territory as well as Washington's decision to fully lift arms embargoes against ethnically divided Cyprus have drawn the ire of Ankara.

But the moves are “focused on putting an end to Russia's brutal and unprovoked war in Ukraine,” Flake said.

“Our defense cooperation with Greece strengthens NATO's eastern flank in support of Ukraine and of our NATO Allies in Central and Eastern Europe," he added. "Our overriding objective, shared with our NATO Allies Turkiye and Greece, is peace, security, and stability throughout the region.”

Late in September, Ankara filed diplomatic protests against Washington and Athens over Greek military deployment, including US-made armored military vehicles, on two Aegean islands, both less than 5 nautical miles off the Turkish coast.

Ankara described the move as a violation of the non-military status of the islands under several international agreements, including one of the founding treaties of the Turkish Republic. The Turkish Foreign Ministry asked Washington to prevent the use of US-made military equipment in these violations.

The tensions between Athens and Ankara escalated last month when Turkish President Recep Tayyip Erdogan threatened that the Turkish army “could come all of a sudden one night” over increasing military buildups on the Greek islands. He reiterated his threat last week in Prague during a European conference which also reportedly witnessed a heated exchange between him and Greek Prime Minister Kyriakos Mitsotakis.

The New York Times reported that Erdogan interrupted the Greek Premier’s speech, accusing him of insincerity in the settlement of the Aegean conflict and slamming the European Union for siding with Greece and Cyprus before storming out the dinner hall. Erdogan denied it and argued that Mitsotakis’ speech was a breach of protocol.

The tensions even extended to soccer during a game between Turkish club Fenerbahce and Greek Cypriot club AEK Larnaca on Oct 13. Fenerbahce fans waved a banner reading, “Peace at home, peace abroad,” a dictum of Mustafa Kemal Ataturk, the founder of the Turkish Republic. AEK fans, in turn, waved a banner, “Peace at home, peace in the world! What an irony never forget,” in a reference to Turkey’s military intervention in 1974. Cyprus remains ethnically divided between Turkish and Greek Cypriots since Turkey’s military intervention in response to a Greek military coup.

The mine blast in Turkey last Friday which killed 41 people offered an unexpected offramp, with the Greek premier and foreign minister offering their condolences. But the Turkish foreign minister, who took time to thank most of his counterparts’ well wishes, did not reply to his Greek counterpart amid mutual recrimination by Ankara and Athens over nearly 100 migrants who were rescued along the Turkish-Greek border. The Turkish defense minister, meanwhile, thanked his Greek counterpart for his condolences message.