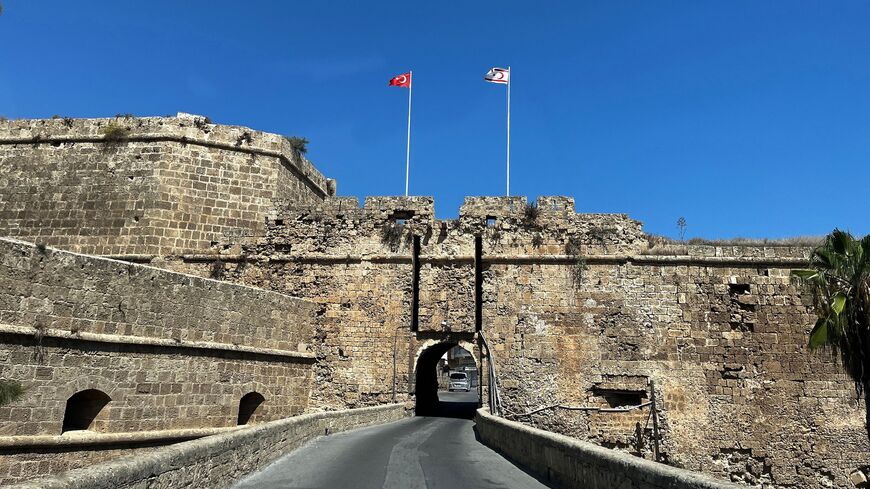 This picture taken on Sept. 18, 2022, shows a view of one of the gates to the old Venetian city walls of Famagusta in the self-declared Turkish Republic of Northern Cyprus, recognized only by Turkey, in eastern Cyprus. - ROY ISSA/AFP via Getty Images

Turkey has vowed to reinforce its military presence in northern Cyprus, where it already has about 40,000 troops, adding to tensions with its historic foe Greece.

In a televised interview late Wednesday, Turkish President Recep Tayyip Erdogan signaled that Turkey would boost its military presence on the island. Foreign Minister Mevlut Cavusoglu affirmed the plan today. “We will send both troops and arms to the island to protect the Turkish Cypriot community,” Cavusoglu said in the Aegean town of Denizli.

The Turkish statements follow Washington’s decision earlier this month to lift defense trade restrictions on Cyprus for fiscal year 2023. The decision, effective as of Oct. 1, rewards the small island state for cooperating with the United States against money laundering and denying Russian military vessels access to ports for refueling and servicing. Both points are crucial for the international embargo against Russia. But in Ankara, it has further fueled Turkish concern that the administration of US President Joe Biden is breaking away from its policy of balance between its two NATO allies in favor of Greece and Cyprus.

The internationally recognized Republic of Cyprus in the south of the island heralded the lifting of the ban as a “historic landmark” that reflected the burgeoning strategic relationship between the United States and Cyprus.

Ankara protested the move, saying it would fuel an arms race on the divided island. Cavusoglu said that the decision, which ignored all the money laundering in Cyprus, was wrong and poorly timed.

The Turkish Republic of Cyprus in the north, recognized only by Ankara, said that the decision delivered a blow to settlement efforts between the two sides. "The Turkish Cypriots see the United States' abolishing the arms sales restriction and allowing the export of even lethal weapons to the Greek Cypriot administration as a threat to their existence,” Turkish Cypriot Foreign Minister Tahsin Ertugruloglu said earlier this month.

Erdogan and the National Security Council, which met under his chairmanship on Sept. 28, called on Washington to “reverse” the decision, claiming it upsets the military balances in the eastern Mediterranean.

“Will we stand by? We cannot,” Erdogan said in a televised interview on CNN Turk. “Turkey already has about 40,000 troops on the island and will reinforce them with land, naval and aerial weapons, ammunition and vehicles. … Everyone must know that this last step will not go unanswered and that every precaution will be taken for the security of the Turkish Cypriots.”

Cavusoglu echoed Erdogan Thursday, saying that Ankara would send more troops and military equipment to the island to protect the Turkish community there. The Turkish forces on the island, present since 1974 Turkish intervention following a Greek coup on the island, include mechanized infantry divisions, commando units and a marine battalion.

Earlier this week, Ioannis Kasoulides, the Greek Cypriot foreign minister and a veteran politician, said that he feared Cyprus would be dragged into the Turkish-Greek conflict. “The Turkish army is stationed on our island and we fear that any conflict in the Aegean Sea will affect us directly because we’ll be used as the weakest link in the whole story,” Kasoulides said in an interview with Bloomberg TV on Sept. 26.

Erdogan said he’d couple his country’s efforts to protect the Turkish Cypriots with diplomatic endeavors to obtain recognition of the Turkish Republic of Northern Cyprus. “I believe that our efforts to get Cyprus recognized would bear fruit,” Erdogan told CNN Turk.  In his speech at the UN General Council, the Turkish leader urged the international community to extend diplomatic recognition to the TRNC, a self-declared republic of nearly 400,000 people.

In 2020, diplomatic sources had signaled that several countries, including Pakistan and Azerbaijan, which had retaken lost territories from Armenia with military help from Turkey, would recognize the small state; but nothing has so far materialized.

The escalation over Cyprus comes amid spiraling tensions over the Aegean between Turkey and Greece, the frenemies on both sides of the sea. Ankara summoned Greek and US ambassadors to the Foreign Ministry Monday to protest against deploying US-made armored military vehicles to two Aegean islands. Turkish security sources shared aerial images over the weekend purportedly showing ships loaded with US-armored vehicles docking at Lesbos and Samos.

Asked about Ankara’s diplomatic protest over sending armored vehicles to the islands of non-military status, Ned Price, the State Department spokesperson, ducked the question, saying it would be up to specific governments to respond to the way they deployed their defense equipment. “We continue to encourage our NATO Allies — Turkey and Greece, in this case — to work together to maintain peace and security in the region and to resolve their differences diplomatically. We urge all the parties to avoid rhetoric and to avoid taking actions that could further exacerbate tensions. Greece’s sovereignty over these islands is not in question, but we call on all countries, including our allies, to respect territorial integrity and sovereignty and to avoid actions that could inflame tensions,” he said.

Erdogan criticized the United States for not caring about international accords such as the treaties of Lausanne and Paris, which stipulate that no military bases can be built on the islands. Recalling that Ankara had made several demarches to Washington, including a letter on Sept. 17, he said, “What we expect from Washington is that it does not steer Greece in the wrong direction.”