Turkey is likely to face stronger headwinds in the eastern Mediterranean after signing a controversial energy exploration deal with Libya’s interim government. 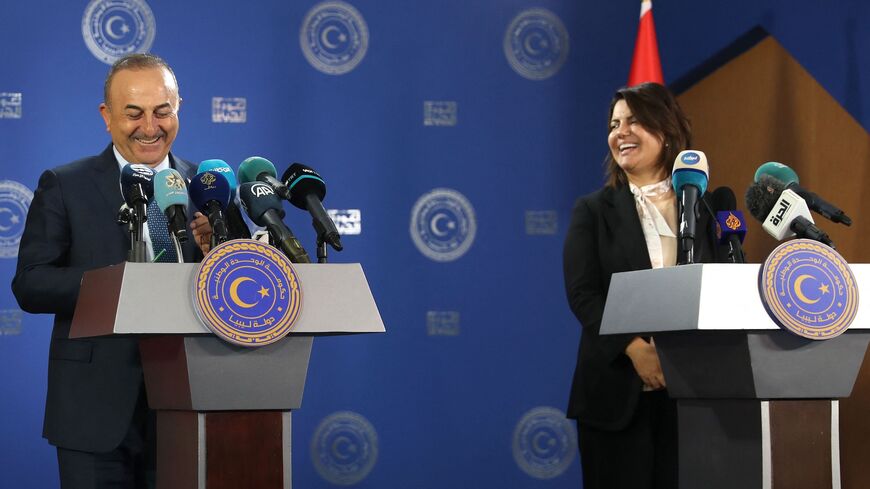 Turkey’s signing of a hydrocarbon exploration deal with the Tripoli government has crippled its recent efforts to balance its policy in Libya and fanned the internal and external rivalries haunting the conflict-torn country.

Aquila Saleh, speaker of Libya’s eastern-based parliament, and Fathi Bashagha, head of an alternative government backed by the parliament, rejected the Oct. 3 deal as null and void, as did dozens of members of parliament and the High Council of State. In a letter to the United Nations, Saleh said the deal was not binding to the Libyan state because the mandate of the Tripoli-based interim government, headed by Abdul Hamid Dbeibah, had expired. He warned the deal would destabilize the eastern Mediterranean, while Bashagha assailed it as a threat to peace and stability in Libya.

Turkish Foreign Minister Mevlut Cavusoglu, for his part, painted a rosy picture. “All Libyan groups with which we have differed in the past strongly support this agreement,” he said.

In fact, the deal has provoked a stronger backlash compared to the reactions that followed the maritime delineation and military cooperation accords that Ankara signed with Tripoli in 2019. Bashagha, who aligned with Turkey at the time, has now joined the objectors.

The backlash rests on several arguments. Dbeibah’s opponents maintain his mandate ended in December 2021 when Libya failed to hold elections as outlined in an UN-brokered roadmap for peace. Moreover, they say, the roadmap does not authorize Dbeibah’s interim government to conclude international agreements. Ankara, they argue, took advantage of Dbeibah’s weakness to make a fait accompli, though the deal needs the approval of the Saleh-led parliament, which had removed Dbeibah and replaced him with Bashagha.

Ankara seemed to be shifting to an impartial policy in Libya in recent months as it forged ties with the eastern forces, including the Tobruk-based parliament, two years after lending military support to Tripoli in the civil war. That a heavyweight Turkish delegation traveled to Tripoli for the inking of the deal is a sign that Ankara has failed to get the desired results from that policy and is now upping the ante again.

The signing of the deal, which followed failed Turkish efforts to reconcile Dbeibah and Bashagha, shows that Ankara is siding with Dbeibah in the legitimacy dispute. Still, Cavusoglu sounded confident that Ankara’s fledgling dialogue with the Tobruk-Benghazi camp would continue. Turkey will reopen its consulate in Benghazi once the conditions ripen, and contacts between the Turkish and Libyan parliaments will continue, he said.

Ankara is turning a deaf ear to the objections, knowing that Libyan politics are fluid and things might change down the road. For Ankara, the deal is more about preserving its leverage in Libya regardless of who comes to power in the future and less about giving credit to Dbeibah. But as is the case with the two previous accords, the validity of the deal will remain disputed without parliamentary ratification. A provision in the deal stipulates it will take effect after the two sides notify each other of the completion of relevant domestic legal procedures.

In further controversy, Libyan Oil Minister Mohamed Aoun said Dbeibah had assigned his ministerial duties to Economy Minister Muhammad Al-Huwayj prior to the signing of the deal. According to Libyan media, Aoun claims Dbeibah made the move to pass a “suspicious” agreement with Turkey “to exploit oil and gas” in offshore areas in eastern Libya. Aoun was not present at the ceremony and it was Huwayj who signed the deal.

Turkey’s quest for a more balanced policy in Libya had to do also with its efforts to mend fences with Egypt. Among other conditions to normalize ties, Egypt has sought assurances regarding Libya, including Turkey’s military withdrawal from the country. Besides backing the opposite sides in the Libyan civil war, Ankara and Cairo have been at odds over gas exploration rights in the eastern Mediterranean. Hence, Ankara’s hydrocarbon exploration deal with Tripoli appears also as a sign that it has given up on courting Cairo for a new page in bilateral ties.

Egypt and Greece stand to be affected the most by Ankara’s new deal with Tripoli, which is meant to add practical aspects to their 2019 accord delineating maritime zones between Turkey and Libya.

Egypt denounced the deal, repeating the argument that Dbeibah’s government is not authorized to conclude international agreements. Greece’s foreign minister had a phone call with his Egyptian counterpart and is expected to visit Cairo on Oct. 8 to discuss enhanced coordination between Greece, Egypt and Cyprus on the matter.

And with the critical reactions of the European Union and the United States, Turkey appears to be bracing for even stronger headwinds in the eastern Mediterranean.

The new deal lays the ground for oil and gas exploration in the maritime zones delineated in the 2019 accord between Ankara and Tripoli. According to Athens, that accord has been effectively nullified by a 2020 pact between Greece and Egypt, designating their own zones. Part of Greece’s objections to the Turkish-Libyan accord was that it ignored Greece’s claim to an exclusive economic zone via the island of Crete.

Responding to Greece’s criticism Oct. 5, a spokesman for the Tripoli government mentioned Crete as an example of disagreements on territorial waters with Greece, flagging a potential flashpoint in the dispute.